Synopsis: Academy Award winner Jack Nicholson and Shelley Duvall star in director Stanley Kubrick's disturbing adaptation of Stephen King's blockbuster horror novel. When writer Jack Torrance (Nicholson)--who has a history of alcoholism and child abuse--takes a job as winter caretaker for a hotel high in the Rocky Mountains, he, his wife (Duvall) and their psychic young son will be isolated until spring. But once the first blizzard closes the road out, the accumulated power of evil deeds committed at the hotel begins to drive Jack mad. Now there may be no escape for his wife and son in this haunting madness, memory and family violence.

This 1980 psychological film helmed by Stanley Kubrick is an often recorded title in many ‘Best Horror Movies’ list, and rightly so. It is one of those films which allow you to fully immerse in the mood – simply because most movies made before the age of came along have the power to make viewers appreciate every visual and sound seen and heard on screen.

Based on Stephen King’s 1977 novel, the protagonist is a father who is an aspiring writer and also unfortunately, a recovering alcoholic. He takes on a job as the off season caretaker of the isolated hotel. He moves in with his wife and young son when everyone moves out during the winter season, and if you don’t already know, strange things start happening.

The title refers to a psychic ability to see happenings from the past. In this case, the kid is the character who possesses this power, and he comes face to face with the hotel’s horrible past. Things start getting crazy with his father becomes supernaturally affected, and becomes more insane by the day. It becomes a game of survival as mother and son try to escape the mad man’s dangerous behaviour.

Watching this film almost 40 years after its original release, you realise what really constitutes good acting. The leading cast members deliver performances that will put some of today’s ‘actors’ to shame. The ever perfect Jack Nicholson tackles a role that seems to be tailor made for him, while Shelley Duvall is a scream queen that makes you feel the increasing danger she is facing. Danny Lloyd, the young actor who epitomises what fear looks like, exudes screen presence that not many kid actors have today.

It is a smart move by the movie distributor to re release this film (Singaporeis the only country in Asia to re release the classic) in time for its sequel directed by Mike Flanagan and starring Ewan McGregor. In the sequel, we see how the young boy has grown up and to face psychological demons from the past.

Even if you have seen this movie, it is likely that it was viewed on a small screen. Hence, this is a good opportunity to catch it on the big screen and experience the film that has spawned countless parodies and homages in popular culture. You should have seen images in movies and ads referencing signature shots from Kubrick’s film: twin girls standing creepily in a hallway, blood spilling out of elevator doors, a scary man sticking his head through a hold in the door, and the back view of a boy riding a tricycle. You can now see what inspired those shots on the big screen.

It is also a chance for you to remember how a good horror movie was made in the past. Today’s horror flicks stuff audiences with big shock moments, elaborate back stories and explanations, and inconsequential monsters and spirits which are unstoppable. Back in the good old days, filmmakers took their time to develop a good story, and in this case, Kubrick and his team took 146 minutes to fully flesh out the screenplay. Yet, you won’t feel the length. What you’d walk away instead is a gleeful dread and anticipation of its sequel, which is adapted from King’s 2013 novel.

(Even if you have watched this classic countless times, it is a good chance to catch it on the big screen to remember how a good horror flick should be made) 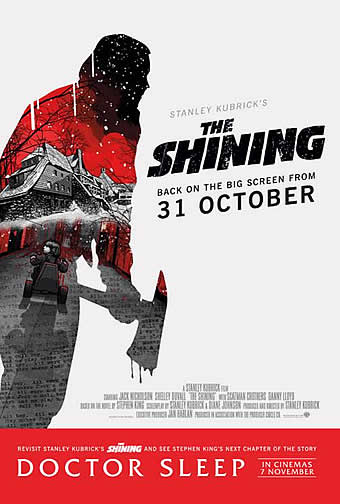