Synopsis: A rescue unit within the Chinese Coast Guard are forced to overcome their personal differences to resolve a crisis.

If you’ve seen ‘Operation Red Sea’ and ‘Operation Mekong’, you’d agree that Dante Lam is one of the best, if not the best, directors in contemporary action cinema. No other Chinese filmmaker has accomplished the same gritty realism and pulse-pounding exhilaration as he had done in both of these preceding movies, and it is not surprising you’d hold the same expectation with ‘The Rescue’.

In terms of action, Lam doesn’t disappoint. The opening sequence alone sees an elite emergency rescue unit of the Chinese Coast Guard aim to rescue two persons trapped atop a burning offshore oil rig on the brink of collapse, and it takes bravado for a movie to open with a sequence as spectacular as this. From the point that the fearless Captain Gao Qing (Eddie Peng) unhooks himself from the cable he is dangling off the side of a helicopter to land atop the rig, to the point that the helicopter has to make some evasive mid-air manoeuvres to dodge the wildly swinging cranes as the rig crumbles, and finally to the successful airlift evacuation, you’ll be transfixed by the sheer harrowingness of that introduction.

Within the next two-and-a-half hours, you’d be indulged with three more of such gripping set-pieces – including one where the unit has to save the driver of a vehicle transporter trapped within amidst a fast-moving river, and another where they are called to rescue passengers on board a flight which has crashed into the open ocean. Each is a race against time, but more importantly, Lam’s absolute resolve for authenticity ensures that you’ll feel the trepidation and thrill of every single moment. The finale is expectedly the most elaborate of them all, set within an LNG carrier out at sea that is on fire and at risk of exploding anytime. Like we said, Lam, who also choreographed the action, delivers the spectacle as stunningly as you can imagine.

And yet, measured against his last two films, ‘The Rescue’ undeniably pales in comparison. Whereas both Operations had the benefit of being singularly mission-driven, the overall narrative here is less focused and ultimately rather distracted, with Lam striving to wrap the four action high-water marks around the personal lives of the heroic men and women of the rescue unit. In actual fact, most of it is centred on Gao Qing, a single parent whose professional calling means that he is unable to be as present and attentive towards his precocious young son Congcong (Zhang Jingyi) as he would like to. Gao's newly-wed teammate Zhao Cheng (Wang Yanlin) also gets some screen time, although you’ll soon realise that is more expedient than anything.

Indeed, despite some assist from veteran Hong Kong screenwriter Lawrence Cheng, Lam’s scripting has obvious storytelling flaws. Not only are there a couple of throwaway scenes involving Congcong and his newfound four-eyed curly-haired friend in school, there is also an all-too indulgent subplot dedicated to the budding romance between Gao Qing and the new female pilot Fang Yulin (Xin Zhilei), whom Congcong is enamoured with and urges his father to marry. Most egregiously, there is a shamelessly manipulative (though effectively heart-tugging) turn in the last hour which sees Congcong undergo an emergency operation to remove a tumour in his brain just as his father has to answer the call of duty.

That these episodes turn out less cringey than they could very well be is thanks to Peng’s unaffected charisma, bonding effortlessly with an irresistibly adorable Zhang while sharing some lovely chemistry with the coy Xin. This is Peng’s fourth collaboration with Lam, and he anchors the film through and through, not just by how he singlehandedly performs each and every one of the film’s most dangerous stunts, but also by injecting just the right extent of masculinity into the role. Likeable though Peng may be, it is equally true that the movie would have benefitted spending more time on the other characters, who end up being wallflowers even though they are part of the same team as Gao Qing.

Had Lam delegated the screenwriting and focused simply on directing, ‘The Rescue’ could probably have been a much tighter and more compelling motion picture. Each one of the rescue missions is a breath-taking spectacle in its own right, choreographed and executed with precision, confidence and flair to get your heart racing. Yet the rest is underwhelming, choosing to amplify humour, romance and melodrama, instead of genuine drama from the inherent conflict between these rescuers’ personal and professional responsibilities. Yes, this tale of, and tribute to, heroism is tense, affecting and riveting where you demand it to be, but after two highly accomplished Operations, you'll probably (and inevitably) be expecting more.

(As spectacular a disaster movie as you would expect from Dante Lam, 'The Rescue' unfortunately lacks compelling human drama to complement what it packs in tense, gripping action) 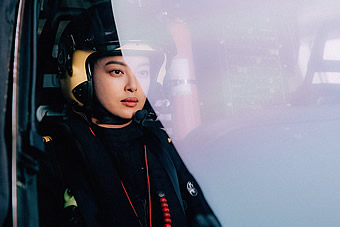