Synopsis:  Deep in the heart of Jakarta's slums lies an impenetrable safe house for the world's most dangerous killers and gangsters. Until now, the run-down apartment block has been considered untouchable to even the bravest of police. Cloaked under the cover of pre-dawn darkness and silence, an elite swat team is tasked with raiding the safe house in order to take down the notorious drug lord that runs it. But when a chance encounter with a spotter blows their cover and news of their assault reaches the drug lord, the building's lights are cut and all the exits blocked. Stranded on the sixth floor with no way out, the unit must fight their way through the city's worst to survive their mission.

Just when the Asian martial-arts genre had lost one of its brightest young stars Tony Jaa to mysticism, along comes Indonesian actor Iko Uwais to give it a renewed kick of life- and boy let’s just say that it is not simply a kick, but more accurately a lightning jolt. Fans of the genre shouldn’t be all too surprised at the hype surrounding ‘The Raid: Redemption’, the second collaboration between Iko and Welsh-born director Gareth Evans- their first Merantau’ already offered a peek at what the 31-year-old ‘silat’ practitioner was capable of.

Learning from the lessons of their earlier film, Gareth has pared down the elements of plot, character, dialogue and perhaps most importantly culture specificity to deliver a quintessential action film that riffs on Hollywood classics like ‘Die Hard’ and ‘Assault on Precinct 13’. So the premise is kept simple but yet efficient- an elite special forces team is ordered to raid a grimy tenement building that has long been the stronghold of a powerful drug kingpin Tama (Ray Sahetapy).

Uwais’ character Rama is one of the police officers sent into the suicide mission, introduced with a tersely told prologue that sees him kissing his pregnant wife goodbye and telling his father that he will ‘bring home’ his presumably lost brother. Gareth, who also wrote the screenplay, uses the former insofar as motivation for Rama to keep fighting and reserves the latter for a somewhat unexpected plot twist that gives the film more depth than you would expect.

Otherwise, he keeps his focus on the setup for the action sequences which are unequivocally the purpose of the entire movie. Right from the start, we are left in anticipation for that climactic fight between Rama and Tama’s two henchmen Andi (Doni Alamsyah) and Mad Dog (Yayan Ruhian), the latter of whom is described by the team leader (former Indonesian judo champion Joe Taslim) as ‘a maniac of feet and fists that would tear down walls for his boss’. That doesn’t mean however that Gareth, who co-choreographed the action with Yayan and Iko himself, takes it easy in the meantime.

Rather, he unleashes all the bullets at his disposal within the first half-hour, as the team finds themselves up and against every lowlife tenant in the building, promised free rent by Tama if they can rid the building of its recent ‘cockroach infestation’. What’s worse, the building is rigged with cameras at every corner and on every floor which Tama views from the safety of his control room right up on the fifteenth storey- and suffice to say it isn’t long before the whole team is whittled down to just Rama, his team leader and their corrupt boss Lt. Wahyu (Pierre Gruno).

No matter really- simplicity is still ultimately the beauty of this no-holds-barred action movie so the faster we get to the good guys that matter the better. To up the ante, our heroes are clearly outnumbered as they are set upon floor by floor by thugs wielding knives, guns and machetes. Even though these earlier fights are just appetisers for the main showdown, it is evident that no lack of effort has been made to ensure that each is gripping to the bone.

Amidst snapped necks, smashed skulls and slit throats, the singular thing that impresses is the thrilling efficiency by which Iko dispatches his opponents. There is nothing too elaborate that the killings appear contrived; rather, brutal as they may be, Iko keeps them realistic and most of all inventive, coming up with new ways each time round to ensure that the brawls are always never less than captivating. Kudos to Iko for both his choreography and execution, both of which combine to emphasise the artistic aspect in the martial-arts form on display.

In contrast to Iko’s Rama, there is something elementally frightening about Yahan’s Mad Dog, who in an extended sequence sure to make the squeamish wince, uses his plain fisticuffs to beat one of the police officers to his death instead of ending it quickly with his pistol. “This is what I do,” he says, holding up his hands- so formidable is he that when Rama eventually takes him on, it becomes a two-against-one battle with the odds in the latter’s favour.

That finale, taking place inside the confines of an iron-walled room, is one of the most exhilarating and exhausting fight scenes ever captured on film, capped with a satisfyingly violent finish that had the audience at this reviewer’s screening clapping their hands in glee. And the best part about it is that you get to see every move in the clarity it deserves, both lensers- Matt Flannery and Dimas Imam Subhono- constantly offering fresh new angles to the action and vehemently eschewing the kind of shaky-cam or quick editing Hollywood is too fond of employing nowadays.

Complemented with a pulsating score by Joseph Trapanese and Linkin Park’s Mike Shinoda, there is no doubt this exceptional film deserves all the positive buzz that has come its way since premiering to raves at the Toronto International Film Festival. It is relentlessly breathtaking every step of the way, building tension and excitement minute by minute until it unleashes its ultimate salvo guaranteed to leave you cheering. Under the assured hands of director Gareth Evans, who despite his young age has mastered a skilful grasp on the action genre, ‘The Raid: Redemption’ is also sure to be a star-making vehicle for Iko- and if you can’t quite figure out why there is the word ‘redemption’ in its title, then take it simply for the fact that it has brought due recognition to the dazzling partnership between Iko and Gareth after the under-appreciated ‘Merantau’

(A must-see for all action junkies- this is the quintessential martial-arts movie of the year, packed wall-to-wall with no-holds-barred thrills and exhilarating real-life stunts) 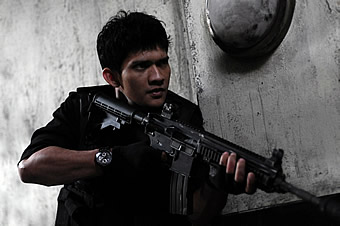 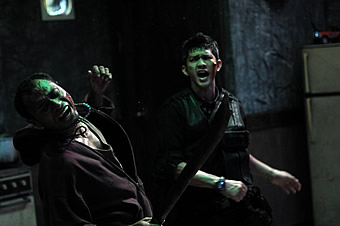 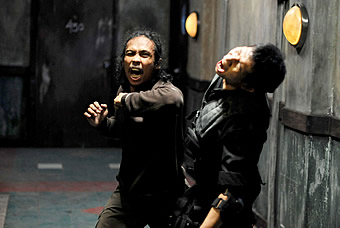 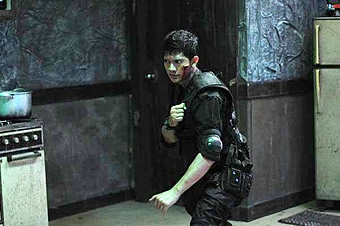 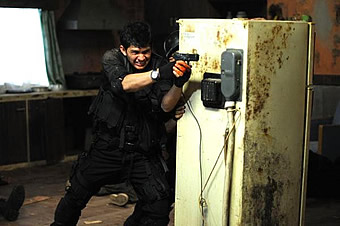 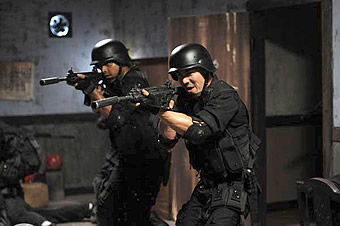