Synopsis: If on one night every year, you could commit any crime without facing consequences, what would you do? In "The Purge," a speculative thriller that follows one family over the course of a single night, four people will be tested to see how far they will go to protect themselves when the vicious outside world breaks into their home. In an America wracked by crime and overcrowded prisons, the government has sanctioned an annual 12-hour period in which any and all criminal activity—including murder—becomes legal. The police can't be called. Hospitals suspend help. It's one night when the citizenry regulates itself without thought of punishment. On this night plagued by violence and an epidemic of crime, one family wrestles with the decision of who they will become when a stranger comes knocking. When an intruder breaks into James Sandin’s (Ethan Hawke) gated community during the yearly lockdown, he begins a sequence of events that threatens to tear a family apart. Now, it is up to James, his wife, Mary (Lena Headey), and their kids to make it through the night without turning into the monsters from whom they hide.

A perfect example of a good premise with bad execution, ‘The Purge’ is yet another low-budget horror from Jason Blum - best known for producing the ‘Paranormal Activity’ series, ‘Sinister’ and ‘Insidious’ - who teams up this time with ‘Assault on Precinct 13’ helmer James De Monaco. The intriguing concept will no doubt hook you, but let us warn you that such expectations will undoubtedly be dashed once one realises how limiting writer/ director De Monaco’s vision for his movie is.

We’ll be brutally honest by stating that whatever inspiration De Monaco began and ended with his conception of the class-warfare setup.  The year is 2022, with the rebuilt Government of the United States sanctioning a yearly night of law-breaking - that includes murder - in order to purge the populace of their anti-social inclinations. Besides fulfilling a cathartic purpose, it also ultimately ‘cleanses’ society of its weak, seeing as how the poor and homeless are usually the ones victimised and even eradicated within that one night of violence.

De Monaco spins the idea in the form of a home-invasion movie, where upper-middle class type family James Sandin (Ethan Hawke), his wife Mary (Lena Headey), their 16-year-old daughter Zoey (Adelaide Kane) and 14-year-old son Charlie (Max Burkholder) are forced to defend themselves against a group of murderous intruders gathered outside their door. Though rigged like a fortress - James, we are told before the start of the Annual Purge, runs his own successful home-security business - the weakness here is human, as the sweet-natured Charlie lets in a wounded stranger (Edwin Hodge) whom the mob gathered outside their house was pursuing moments before.

The bloodthirsty crew led by a marvellously creepy Rhys Wakefield demands the return of their prey, which De Monaco establishes as a moral dilemma facing James and Mary in the film’s midsection. Do the right thing or do the selfish thing? It’s hardly any secret which the family eventually chooses, though it is only in the last third that his intentions become clear. Yes, while one may be fooled for thinking that he is decrying America’s violent mentality, De Monarco indulges those very tendencies with a violent showdown filled with machetes and assault rifles as soon as the gang breaches the house’s defences.

And so what might have been a fascinating dystopian sci-fi about aggression, morality and class warfare is in fact no more than a dressed-up home invasion flick, complete with the sort of exploitation that characterised other such genre pictures like ‘Straw Dogs’ and ‘Funny Games’. Granted that there are moments of pure dread and De Monaco does an okay job sustaining the tension for the movie’s brief 89-minute running time, but what transpires is still unequivocally a let-down given the potential of its high-concept premise.

That is even more so when one considers that the performances are also far better than what the movie deserves. As with De Monaco’s ‘Assault’, Hawke is a solid lead actor for the morally ambiguous James, whose ethics are put to the test by no less than his very own teenage son. Ditto for Headey, forced to make a choice between her own maternal instincts and her humanity over the course of the night. While Aussie thespian Wakefield is chilling as the clearly well-heeled, smart and manipulative psycho, his menace is somewhat curtailed by one-note characterisation that fails to build on a mesmerising introduction.

Indeed, De Monaco’s film seems good only as a collection of missed opportunities, whether as social critique or as a smart thriller. By the time one is aware of its B-movie aspirations, you’ll already be disappointed by what you had expected this movie to be, or really what it could have been. It’s an emptying experience all right, purged of ambition, intelligence or ingenuity, so you’ve been warned to similarly purge yourself of expectation if you’re going to step into this all-too generic home-invasion exploitation thriller.

(Far from the smart dystopian sci-fi thriller it could have been, this dressed-up home invasion flick settles for generic B-movie thrills) 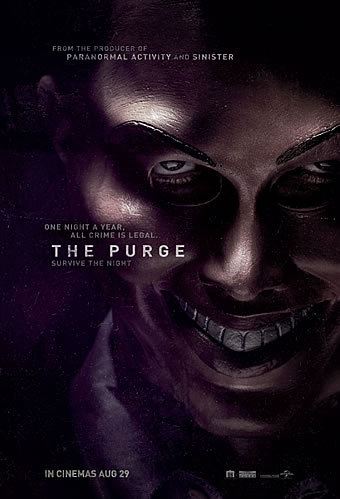 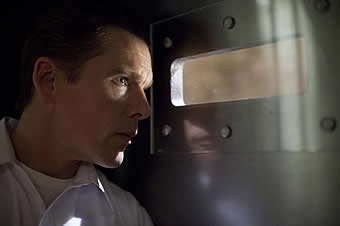 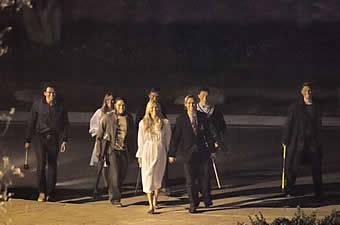 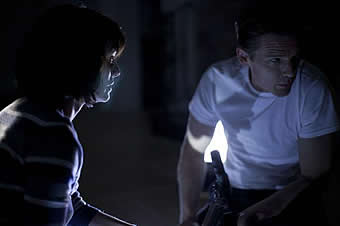