Synopsis: Stranded after a tragic plane crash, two strangers must forge a connection to survive the extreme elements of a remote snow covered mountain. When they realize help is not coming, they embark on a terrifying journey across hundreds of miles of wilderness, pushing one another to endure and igniting an unexpected attraction.

If there's one lesson to be learnt from The Mountain Between Us, that is to pick a manly doctor as your fellow travel companion when you plan to embark on a shaky plane manned by a shady pilot. And preferably the companion comes in the form of Idris Elba (The Dark Tower, Thor)

Kate Winslet who escaped from the sinking Titanic decades back plays Alex, a photo journalist who is rushing back to New York for her wedding to a guy named Mark (Dermot Mulroney). But when all flights are cancelled due to bad weather, Alex proceeds to hire her own private plane and Ben (Elba), a brain surgeon who is hurrying to Denver for an operation decides to tag along. When their pilot suffered a stroke midway, the plane went on to crash onto a mountain top. With no one to turn to and with Alex’s leg injured, Ben and Alex must find a way out or risk perishing in the harsh cold weather.

The Mountain Between Us is actually based on a book by Charles Martin and reworked into a screenplay by Chris Weitz (The Golden Compass) and J. Mills Goodloe (The Age of Adeline) although no one will miss a beat if you tell them it’s from Nicholas Sparks. It’s more of a romance than a survival tale so you know what you are getting if you are planning to catch it. The chemistry between Winslet and Elba is electrifying, far more intense than the miserable fire they set up. It’s a big deal because the movie won’t work if the two leads are as stuffy as two soft toys and you are basically facing the two of them for most of the running time. Okay, there’s a dog which belonged to the dead pilot if you must argue.

Generally, it will be a boring, drag out affair however these two acclaimed cast members delivered performances that make their characters so believable and down-to-earth that you can’t help rooting for them. Alex is a sensitive soul who prefers to rely on her instinct while Ben is the logical one. The latter prefers to wait out for a rescue team and the former choses to venture into the unknown. The movie tells the story of how two remarkably different people end up falling in love with each other. Regardless of how cheesy it is, I guess this is the gist of the movie and it managed to convey it beautifully.

The movie does instil a sense of danger be it a cougar attack or Ben nearly falling off a cliff. There are certainly moments of peril here and there but again, this is not director Hany Abu-Assad’s (Paradise Now) purpose in telling this survival story. He is more concerned about the human connection and emotional attachment between these two persons who started out as complete strangers. We see them grow closer, fall in love and relying on each other to survive the ordeal. As audiences, we believe and care for them and that’s perhaps it’s the greatest achievement of The Mountain Between Us. 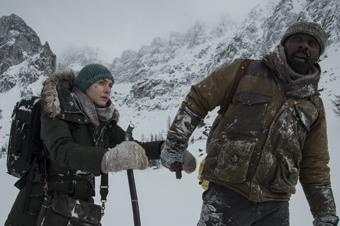