Synopsis: During the warring period of the three kingdoms, ancient China is in turmoil. To unify the country, general Cao Cao, the real power behind the emperor, enlists the aid of the greatest warrior in the land Guan Yun Chang (Donnie Yen).

After leading Cao Cao’s forces to victory Guan Yun Chang sets out with Qi Lan to rejoin Liu Bei. But now Cao Cao has deemed him too great a threat to live, and on the journey he must face all the forces at the emperor’s command sent to destroy him.

The perfect candidate is none other than Hong Kong action superstar Donnie Yen, of course.

After a decent success that was Ip Man (2008), Yen has been wowing his fans with his slick moves (okay, the redundant All’s Well Ends Well 2011 was a breather) in one action flick after another. Here, he takes on the titular role in a historical epic drama based on one of the characters in the classic novel Romance of the Three Kingdom. A fictionalised tale set in AD 200, this high budget production has its attention on the relationship between General Guan and the infamous Cao Cao, who is out to conquer the whole of China. Despite Cao Cao’s repeated attempts to recruit Guan Yu, his loyalties lie with Liu Bei, whose concubine Guan Yu has a soft spot for. The 107 minute movie follows Guan Yu as he faces treacherous ambushes while escorting the lady home to his sworn brother.

Yen has proven his acting chops in works like Bodyguards and Assassins (2009) and Legend of the Fist: The Return of Chen Zhen (2010), and he delivers a decent performance here as the recognised deity in Buddhism, Taoism and Confucianism. He personifies the gallantry, trustworthiness and uprightness that Guan Yu is known for. But all eyes are on Mainland actor Jiang Wen as the tyrannical Cao Cao. The acclaimed actor steals the show with his ability to instill an intelligently sly sense of intimidation in all the scenes he appears in.

Supporting characters are played by Sun Li (Fearless), Andy On (True Legend) and many other Mainland artistes (Li Zonghan, Shao Bing and Hei Zi amongst them), ensuring ticket sales in the Mainland China market. Familiar faces like Alex Fong (as Liu Bei) and Chin Siu Hou (as a slain general) also appear as cameos.

The spectacular actions scenes are no doubt the highlight of this highly recommended movie. Guan Yu’s famous expedition of “crossing five passes and slaying six generals” plays out in an episodic manner, with each sequence showcasing a unique martial arts style. Choreographed by Yen himself, action fans will be pleased to see various blades, spears, crossbows and arrows on display, as they come into use during the countless fight scenes.

Action scenes aside, the drama is often intense and serious, with elevated dialogues written by directors Alan Mak and Felix Chong. This may not be Infernal Affairs material, but expect to be engaged in a high octane drama that features some truly intelligently dramatic lines.

Those unfamiliar with the original novel may be thrown off balance with the massive setup of this period piece. But given its very impressive production values, you will be taken along for the ride. With luscious cinematography by Chan Chi Ying (Detective Dee and the Mystery of the Phantom Flame), masterful production design by Bill Lui (Lust, Caution), and an emotional score by Henry Lai (Echoes of the Rainbow), this is one Chinese production truly worth watching on the big screen.

(An ambitious production that will make the Chinese community proud)

THREE KINGDOMS: RESURRECTION OF THE DRAGON (2008) 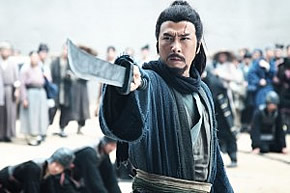 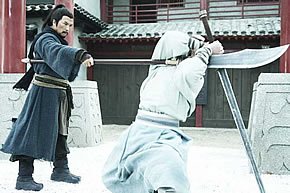 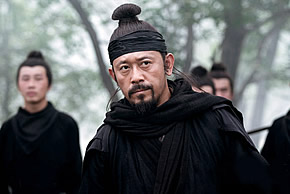