Synopsis:  “The Kitchen” stars Oscar nominee Melissa McCarthy (“Can You Ever Forgive Me?” “Bridesmaids”), Tiffany Haddish (“Girls Trip”), and Elisabeth Moss (“The Handmaid’s Tale”) as three 1978 Hell’s Kitchen housewives whose mobster husbands are sent to prison by the FBI. Left with little but a sharp ax to grind, the ladies take the Irish mafia’s matters into their own hands—proving unexpectedly adept at everything from running the rackets to taking out the competition…literally.

Not often do you see a mob drama headlined by an all-star female cast, which makes ‘The Kitchen’ even more disappointing. Despite assembling a dream trio in Melissa McCarthy, Elisabeth Moss and Tiffany Haddish, this ill-conceived female empowerment tale doesn’t quite know what to make of its three lead characters; in fact, it doesn’t even know just what sort of movie it wants to be, and ends up being neither a serious-minded crime yarn like ‘Goodfellas’ or a violent comedy-drama in the same spirit as the DC Vertigo comic-book miniseries which it is adapted from.

Indeed, as unlikely as that may read, ‘The Kitchen’ spawns from a little-known graphic novel by Ollie Masters and Ming Doyle, which imagines what could happen in 1970s Hell’s Kitchen if three women decided to start their own gang in the Irish underworld. Given the predominance of the opposite sex, there would have needed to be a strong impetus for them to do so in the first place – hence the setup which sees our central trio take their financial circumstances into their own hands when their husbands are nabbed by the police during a robbery and sent to prison.

It isn’t long before their motivation evolves from necessity to liberation: Kathy (McCarthy) has long been a dutiful wife, and relishes being able to take charge of her destiny; Claire (Moss) has lived with an abusive husband, and makes no apologies shagging up with a Vietnam vet Gabriel (Domhnall Gleeson), who turns out to be pretty handy in assisting the gals with body disposal; and Ruby (Haddish) longs to break out of the shadow of her racist husband and mother-in-law (Margo Martindale). Each is given reason for us to feel empathy for – and cheer when she breaks out of her respective birdcage – but chances are you’ll find yourself less moved than confused.

Unless you’re pro-crime, there is at least something troubling about the way that Kathy, Claire and Ruby make their way up the ladder. We see them muscling local businesses to pay up, threatening those who do not, and even eliminating the competition – and whether deliberately or unintentionally, condensing these exploits into montages further reinforces how the movie is tone-deaf to the fact that these acts are still criminal. By the time the girls start turning against each other as they become more ambitious/ ruthless/ feckless, your distaste towards them will feel fully justified, and wonder how the movie could ever think that we could get behind them in the first place.

To the stars’ credit, much of that blame lies with Oscar-nominated writer Andre Berloff (of ‘Straight Outta Compton’), who makes her directorial debut here. Berloff’s scripting is hardly at her best, as she struggles to define her characters compellingly or even coherently – not only are we never fully convinced of the depth of Ruby’s inferiority complex because of her skin colour (she’s from Harlem), we are left puzzled why Kathy would so easily leave her husband to the Italian mob even if the latter had made a wrong move behind her back. Even worse is her directing, which leaves scenes going on for too short or too long, has little sense of pace and momentum, and further illuminates the shortcomings of her plotting.

Given the state of the material, we can hardly blame McCarthy for coming off weak, struggling to build her character’s incongruities into a cogent whole. Haddish fares better in her first dramatic role, but there is little room for her to dig deep into what is essentially a thinly written character willing to do anything and everything to get her way. In contrast, Moss makes the deepest impression because her character is the most clearly and simply defined. The rest of the stellar supporting cast are equally wasted, though Brian d’Arcy James, James Badge Dale and Jeremy Robb do their best with their limited (and sidelined) male roles.

As much as we’d have liked to embrace ‘The Kitchen’ as the first female-centric mob drama, or even a female-fronted DC project, this is a misfire on too many counts. It is hardly a character-driven drama, or even a drama for that matter, considering how cartoonish the twists and turns are. It is also a troubling statement of female empowerment, especially if embracing it means accepting the liberty to bend law and order to one’s will. It is however undoubtedly a criminal waste of talent, in front of and behind the camera, every one of whom has pulled in much better work than this messy, haphazardly constructed, and downright unpleasant movie. Suffice to say, this dish deserves to stay in ‘The Kitchen’.

(Not even the stellar female lead cast can save this incoherently plotted, scrappily directed and deeply frustrating mob drama, that is little more than a criminal waste of talent) 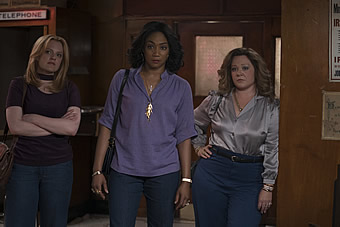 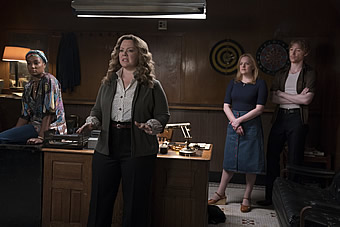 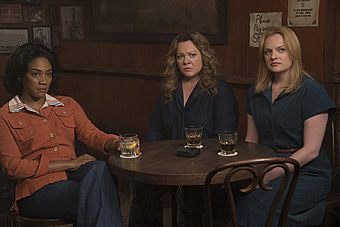 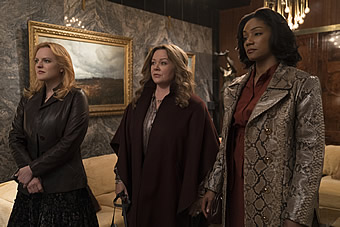