Synopsis: After a remote diamond mine collapses in far northern Canada, a ‘big-rig’ ice road driver Mike McCann (LIAM NEESON) must lead an impossible rescue mission over a frozen ocean to save the trapped miners before their oxygen runs out. Contending with thawing waters and a massive storm, they discover the real threat is one they never saw coming. Ice road veteran Mike McCann, along with his younger brother Gurty (MARCUS THOMAS), a gifted mechanic though impacted by aphasia from a war injury, join a hastily assembled team of skilled ice road drivers (LAURENCE FISHBURNE and AMBER MIDTHUNDER) who embark on a dangerous rescue mission. Mike and the team are forced to conquer stalled engines, cracking ice, violent pressure waves, deadly explosions, entire big rig trucks falling into the dark frozen waters, white-outs, an avalanche, and the death of their operation leader, all of which culminates in an epic showdown between Mike and the assassin, who seeks to bury them all beneath Lake Winnipeg.

Even amidst the COVID-19 pandemic, Liam Neeson’s second act as a grizzled action star had not lost its momentum: including this latest offering, Neeson has headlined three action thrillers since last year. Yet those who have kept faith with the Irish actor will know that not all of these films were of the same calibre; in fact, the later ones saw less of the ‘particular set of skills’ which Neeson had warned his enemies about in ‘Taken’, and were also therefore disappointing in that regard.

‘The Ice Road’ doesn’t come close to being anywhere as exciting as ‘Taken’, but it still is far more interesting and exciting than his previous two films, ‘Honest Thief’ and ‘The Marksman’. Its title refers to the paths over frozen lakes up in northern Canada that are only used in the winter months when the ice is thick enough; alas, when a methane explosion at a diamond mine in Northern Manitoba traps a clutch of miners, it becomes the only means by which 30-ton gas wellheads can be delivered in order to drill and cap the gas pocket and free the men.

Neeson’s Mike McCann is one of the veteran drivers who signs up for the treacherous rescue mission; besides Mike, the other two big rigs which will attempt the journey are driven by local contractor Jim Goldenrod (Laurence Fishburne) and a Native American girl Tantoo (Amber Midthunder). Whereas Mike is in it for the pay, it is a lot more personal for Jim and Tantoo: Jim knows the miners who are trapped, and Tantoo’s brother is one of the men trapped in the mine.

As Tantoo explains, it isn’t just any plain drive. If the 65,000 lb. rigs travel too slow, the pounds per square inch on the tires will cause the ice to crack; but if the rigs travel too fast, they risk creating pressure waves that will also crack the ice. An early montage sequence shows each driver placing a bobblehead on his or her dashboard, the significance of which becomes clearer later on when the team has to confront such a wave. It is nail-biting stuff all right, especially for those who aren’t yet acquainted with the profession through the History Channel’s reality TV series ‘Ice Road Truckers’.

Though the CGI could do with more polish, the location shooting delivers some spectacularly real vistas. Indeed, credit goes to writer/ director Jonathan Hensleigh for a taut build-up against the awe-inspiring landscapes in and around Winnipeg, emphasising the conditions imposed by nature that the big-riggers are forced to contend with; one particularly harrowing scene sees Mike and his pals try to outrace a crack in the ice sheet while two of their trucks are tethered together, and it is as thrilling as you can imagine.

It is somewhat unfortunate that Hensleigh turns what could have been a tense survivalist thriller into a more conventional cat-and-mouse game fuelled by corporate greed. We shan’t say more to spoil the jackknife plot turn that should not come unexpected from a filmmaker who had written such Michael Bay classics as ‘The Rock’ and ‘Armageddon’, but nevertheless ruins what could otherwise have been a perfectly fine dramatic film. Still, those expecting Neeson to start punching people will probably let out a cheer when he hisses ‘Now I’m angry!’ halfway through the movie, marking when the movie becomes yet another Neeson action vehicle.

Those looking for Neeson to kick ass will probably still be somewhat disappointed though: besides a mano-a-mano on the ice, most of the action with Neeson takes place with him behind the wheel trying to outdrive the baddies in jeeps, bikes and snowmobiles. Hensleigh keeps the pace tight, but the chases are standard action fare that will inevitably pale in comparison to the recent ‘F9’. Neeson remains a gruff pleasure, perfectly comfortable in a by-now familiar role that requires him to be careworn and wiry.

‘The Ice Road’ may not break new ground (pun intended), but it is one of Neeson’s better action movies in recent time. Even though it does veer a little off-course at the halfway mark, the premise is solid, the direction competent, and the action largely credible and rousing. With age catching up, we may never see Neeson reprise the sort of action hero he was in ‘Taken’, but if this is the new norm for such mid-budget, old-school beat-em-ups, we’re more than happy to continue embracing him as the Charles Bronson of our generation.

(Though it veers a little off-course with a jackknife plot turn involving corporate greed, this latest Liam Neeson action vehicle remains one of his more interesting and thrilling entries in recent time) 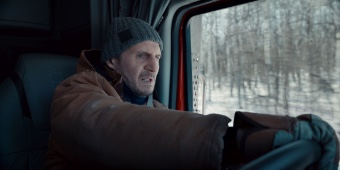