Synopsis: Anthony is 81 years old. He lives alone in his London apartment and refuses all of the nurses that his daughter, Anne, tries to impose upon him. Yet such a necessity is becoming more and more pressing for her, as she can’t see him every day anymore: she has taken the decision to move to Paris to live with a man she has just met… But if such is the case, then who is this stranger who suddenly bursts into Anthony’s living room, claiming to be married to Anne for over ten years? And why is he claiming with such conviction that they are at the supposed married couple’s home, and not his? Is Anthony losing his mind? Yet he recognizes the place: it is indeed his apartment, and only just the night before was Anne reminding him of her divorce… And didn’t she decide to go and live in Paris? Then why is she now insisting that this was never the case? There seems to be something going around, as if the world, for a moment, has ceased to be logical. Unless his daughter, and her new companion, are the ones trying to make him appear as crazy? Is their objective in fact to rob him of his apartment? Do they want to get rid of him? And where is Lucy, his other daughter? Astray in a labyrinth of answerless questions, Anthony desperately attempts to understand what is going on around him. THE FATHER is about the painful trajectory of a man whose reality crumbles little by little before our eyes. Yet it is also the story of Anne, his daughter, who faces an equally painful dilemma: what must she do with her father? Should she take him with her, even if that means compromising her life with Paul? Does she have the right to live her own life? What happens when one must become parent of one’s own parents?

With just “The Father” as its title, and a poster featuring two huge headshots of Anthony Hopkins and Oliva Colman, it seems almost unlikely that the film co written and directed by Florian Zeller will attract much attention, especially from the mainstream audience who prefer a movie that can numb the senses with spectacular CGIand deafening soundtrack.

This film is best appreciated with no distractions, so you can wholeheartedly empathise with the protagonist’s journey. Hopkinsplays Anthony, an ageing man who is increasingly confused by the people and places around him. Is his elder daughter leaving Londonfor Paristo live with her new boyfriend? Is she divorced since his son in law is still living in the house? Why does his caretaker look so familiar? Why are his younger daughter’s paintings missing from the house? Is he staying in his private flat or his elder daughter’s place? And why does his watch always go missing?

The confusion experienced by Anthony is heartbreaking yet terrifying. As the film progresses, viewers are not sure what exactly is happening in real time anymore, as the ensemble cast including Colman, Mark Gatiss, Imogen Pooots, Rufus Sewell and Olivia Williams show up in different scenes as different characters. This is probably just a glimpse of what people with dementia are experiencing every minute, and you can imagine the frustration faced – by both the sufferer and the people around.

Hopkins’ engaging performance has earned him a Best Actor nomination at the 93rd Academy Awards, where the film is recognised in five other categories, including a Best Supporting Actress nomination for Colman. The 83 year old actor delivers a performance that is at times charming, at times infuriating but always relatable. For his stellar performance, Hopkinstook home prizes at the British Academy Film Awards and British Independent Film Awards.

The talky drama is French playwright Zeller’s directorial debut, and is based on his 2012 play Le Pere. One can imagine the story happening on stage, where characters deliver their lines against a backdrop of furniture, doors and household items. The film adaptation cleverly creates an interlocking network of sets which disorients the viewers, letting us have an idea of what it feels like to see the world from Anthony’s mind.

In the same vein, the editing of the film creates an unnerving experience as the non linear situation of events play out like a horror thriller. Shifting points of view and repeated lines from different characters throw viewers off balance, not knowing what is happening in Anthony’s troubled mind. For the apt approaches in adapting the stage play on screen, the film is nominated for Best Adapted Screenplay, Best Editing and Best Production Design at the upcoming Oscars.

Besides showcasing a memorable performance from Hopkins, the film also incorporates masterful filmmaking. Unlike other films which deal with similar themes, this one doesn’t dwell with melodrama. Instead, it moves the audience by telling a humane story about what living dementia may be like.

(Genuinely moving without being overly sentimental, this masterful work features a stellar performance from Anthony Hopkins) 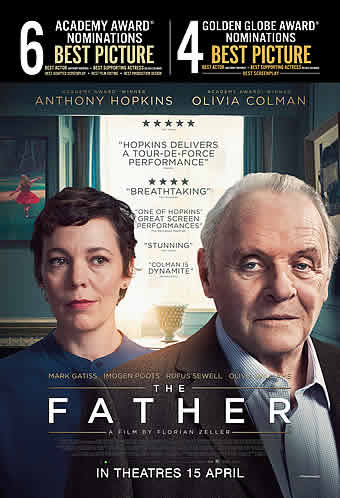 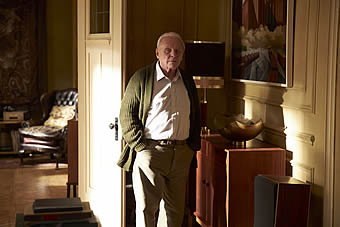 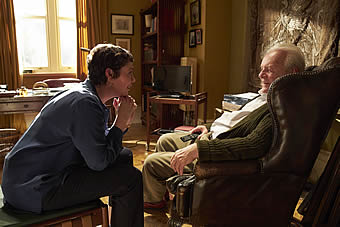