Synopsis: Based on true-life events, a priest is put behind bars for the homicide of a nun on whom he was performing an exorcism on. A journalist strives to establish if he did murder a deranged human being or if the accusations are false and he has lost the battle with a demonic presence, that she may possibly have come into contact with

As tempted as you might be to check out this latest addition into the demonic possession sub-genre because of its talent pedigree (it’s produced by Peter Safran, one of the producers of ‘The Conjuring’ and written by the duo behind the same movie), ‘The Crucifixion’ is a lot more generic than you’re probably expecting it to be.

In a nutshell, this is the story of a sceptic who investigates an exorcism gone wrong and comes face-to-face with the demonic entity herself. That sceptic here is young New York Sentinel reporter Nicole Rawkins (Sophie Cookson), whose excuse for her ‘unbelief’ is the loss of her mother to cancer a few years ago. Although journalistic integrity would have it that she encounter the facts with an open mind, Nicole believes that it is the fault of the priest and four other nuns who had performed an exorcism on a fellow mentally ill nun named Adelina over the course of a few days that she had eventually died.

There is both fact and fiction to their tale, which is supposedly based on a 2005 incident in Romania.  The names have been changed, but the details of the case remain essentially the same. Whether the victim was in fact possessed or simply suffering from schizophrenia is as much a matter of the facts as it is one of faith – after all, if one doesn’t believe in God and/or the Devil, then that person is not going to believe that there is such a legitimate thing as exorcisms in the first place. That said, there is no such ambiguity here, as it seems patently clear throughout that the deceased was indeed taken by a demon who goes by the name of Agares.

Without the benefit of the doubt, ‘The Crucifixion’ therefore becomes a straightforward horror bereft of intrigue. The script by Chad and Carey W. Hayes has Nicole spend her days in town talking to the local Bishop Gornik (Matthew Zajac) who had stopped the exorcism (thus apparently dooming it), another local priest Father Anton (Corneliu Ulici), and the medical professionals who had cared for Adelina when she was alive as well as those who had performed the autopsy to determine her cause of death – but at least two out of three of the perspectives listed here are pointless if the conclusion is already that Adelina was possessed.

In between, Nicole has her own run-in with the demon herself, which come in the proverbial forms of hallucinations, voices and bugs. Unfortunately, up till the final climactic end where Father Anton has to perform an impromptu exorcism on Nicole herself, there is nothing really scary or significant that happens. It is telling in itself that director Xavier Gens resorts time and again to jump-scares in order to try to get you spooked, instead of establishing build-up and suspense like how ‘The Conjuring’ movies did.

But the fault isn’t just Gens’ alone, who to his credit, has a competent grasp of pacing and tone; instead, the movie is thus lacklustre because of a weak script that doesn’t have an interesting story to tell or characters that we should care about. Try though she does, Cookson can’t quite make us bother about Nicole, especially not when what we learn about her during the course of the film is how she develops an unexpected romantic interest in Father Anton than how the unexpected death of her mother had affected her so profoundly in the first place. There is little characterisation of the other supporting acts to speak of, but in failing to create a compelling lead in Nicole, the movie ultimately loses credibility.

Truth be told, ‘The Crucifixion’ is a rather weak excuse of a ‘demonic possession’ movie. It isn’t just how we’ve seen all that’s here before, but also how dull it manages to be even as it is familiar. Really, it doesn’t matter if you’re a believer or not – objectively, this is a dreary effort at an exorcism thriller whether seen from the eyes of faith or plain logical reason. Unless you really have nothing else to do this Halloween, don’t even bother crucifying your time here.

(As derivative and dull as 'exorcism' thrillers can get, 'The Crucifixion' offers little horror but regular - and increasingly frustrating - jump-scares) 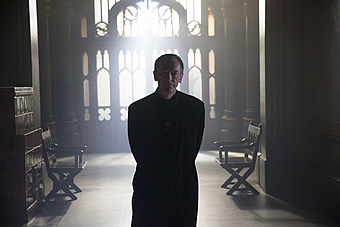 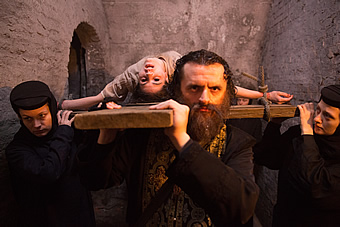 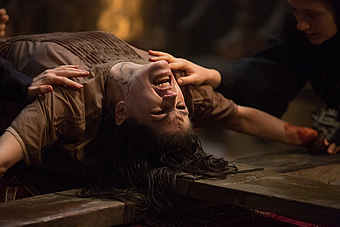