Synopsis: “The Conjuring: The Devil Made Me Do It” reveals a chilling story of terror, murder and unknown evil that shocked even experienced real-life paranormal investigators Ed and Lorraine Warren. One of the most sensational cases from their files, it starts with a fight for the soul of a young boy, then takes them beyond anything they’d ever seen before, to mark the first time in U.S. history that a murder suspect would claim demonic possession as a defense.

Two sequels and five spinoffs later, ‘The Conjuring’ franchise may truly have reached its creative nadir. It used to be that the main ‘Conjuring’ films were the gold standard of the extended universe, and the spinoffs were effective but workmanlike and otherwise forgettable; alas, rather than end the trilogy on a high, this third film falls short of its predecessors by ditching the spine-tingling slow-burn sequences that were a signature of the earlier two movies (remember the one where Lili Taylor was lured into the basement to play hide-and-clap with a ghost?) and resorting to procedure and Satanic cult worship for scares.

Again based on a true story that entangled the real-life paranormal investigators Ed (Patrick Wilson) and Lorraine Warren (Vera Farmiga), this one chooses the 1981 trial of Arne Johnson (Ruairi O’Connor), who was accused of stabbing his landlord to death and claims in his defence that he was possessed when he did it. His innocence is at no point in doubt; as the rip-roaring opening exorcism sequence shows, Arne was taken by the demon who had earlier possessed his girlfriend’s younger brother David Glatzel (Julian Hilliard), after he spoke directly to it and pleaded with it to let the young boy go in exchange for his soul.

Ed is witness to the exchange, but the sheer power of the demon causes him to suffer a heart attack amidst the mayhem and therefore unable to offer fair warning before the devil would make him [Arne] do its bidding. After convincing Arne’s lawyer to enter that unprecedented defence, the Warrens take it upon themselves to try to hunt down the source of the evil; in particular, they trace the demon earlier on to a witch’s totem placed below the Glatzels’ house, triggering a race against time to track down the witch and destroy her sanctuary before she claims Arne once and for all.

Their mission plays out over a series of encounters on the road, including that with a retired priest who used to investigate a cult known as the Disciples of the Ram and a diversion to help the authorities of Danvers, Massachusetts to locate a missing teenage girl suspected of causing the death of her friend under similar circumstances. Whereas the first two ‘Conjuring’ films were set around a single haunted house, this chapter has a much more expansive narrative, going from the possession of Arne Johnson to that of another teenage girl and finally to the sins of the Father in the form of a procedural.

While we would certainly have preferred that James Wan, who directed the earlier ‘Conjurings’ with preternatural skill, had returned for the sequel, his successor from ‘The Curse of La Llorona’ weaves the events ably together with adroit suspense. That said, director Michael Chaves cannot quite match Wan’s brilliant grasp of timing and misdirection, often settling into a predictable rhythm of breaking a quiet scene with an odd occurrence before the split-second addition of something specifically designed to make you jump in your seat. To his credit, Chaves does come up with a couple of smart scares (such as one involving a waterbed), but he isn’t quite as masterful as Wan in manipulating and subverting expectation to give you a real jolt in the spine.

Even more so therefore, the superb chemistry between Wilson and Farmiga elevates the material here. As the religiously devout husband-and-wife couple who risk life and soul to rescue others from evil, both actors are back in bracing form, bringing to their characters and to the movie much-needed human emotion and dimension amidst the horrors. There is even a sweet-natured romance thrown in, which pays off in surprising ways in the finale. In fact, we’d say that it is because of the steady pair that the movie ultimately manages to still come off better than the best of the spinoffs.

Don’t get us wrong – ‘The Conjuring: The Devil Made Me Do It’ is still a fine horror movie in its own right, but compared to the earlier two modern-day classics, this one feels a lot more pedestrian and therefore less impressive. It lacks the earlier films’ gift of build-up and surprise, and threatens to draw its storytelling circle too wide at times (even if it manages to rein it all in at the end), so those looking for the same tight focus on location and character will inevitably be disappointed. For those who are counting, this is the eighth film in the universe, and we suspect in order for the series to continue to have life within it, the next ‘Conjuring’ film will need to make sure it continues to be the high point in the series as well as in modern horror.

(A definite step down from the earlier two 'Conjuring' films, this latest chapter lacks the spine-tingling slow-burn sequences of its predecessors, even as it remains eminently watchable and suspenseful) 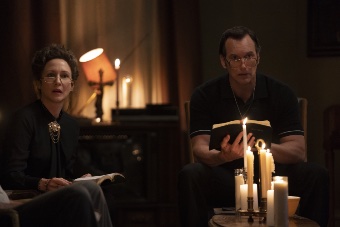 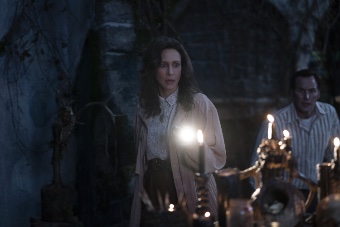