Synopsis: Ji-hyuck (KIM Woo-bin), a remarkably intelligent safe-cracker and con-artist with exceptional talent in every kind of fraud, holds hands with Goo-in(GO Chang-suk), his best friend and guy with top connections, and Jong-bae(LEE Hyun-woo), the youngest hacker in the field who can hack even the most impenetrable security system. The fantastic team rob a top-secured jewelry shop, and make headlines overnight. Keeping a close eye on them, Chairman CHO (KIM Young-chol), the black hand of the financial world, draw Ji-hyuck and boys into his grand operation, which is to steal, in just 40 minutes, black money in the sum of 150 million dollars hidden in Incheon Customs, which boasts of the top security system in North East Asia.

By now, Hollywood has pretty much defined a template for capers, one which director Choi Dong-hoon parlayed to both critical and commercial success in ‘The Thieves’ three years ago. Kim Hong-seon’s sophomore feature doesn’t stray much from formula, and so it is even more disappointing that it is this mediocre. Yes, that a caper is boring is almost criminal, and indeed ‘The Con Artists’ leaves its audience disengaged from start to finish, no matter Kim’s attempt at trying to keep his flagging action comedy pacey.

Rather than an ensemble, Kim gives too much credit to lead actor Kim Woo-bin’s character Ji-hyuck. First introduced as a safe-cracking whiz next to Go Chang-seok’s bumbling counterfeiter Goo-in, Ji-hyuck becomes the team’s only source of intelligence, devising a plan to stay ahead of his latest employer, the ruthless mob boss Captain Cho (Kim Young-chol). So clever is he that Goo-in need serve no other purpose than to be his comic foil, and his other associate, Lee Hyun-woo’s Jong-bae, no ostensible use even as a top hacker whom Ji-hyuck recruits to join his team. It’s one thing to be the Danny Ocean of this heist, but quite another to be Ocean’s Eleven all in one, which is what Choi has made Ji-hyuck out to be.

Anyhow, as far as set-ups go, Ji-hyuck gets into Cho’s crosshairs when the former robs the latter’s jewellery shop, making off with millions worth of diamonds. Cho uses that burglary to hold Ji-hyuck hostage in order to conduct a bigger heist, to the tune of a potential US$150 million dollars of black money protected in a highly secure facility located near the Incheon Customs. Needless to say, there is some shifting alliances and double-crosses thrown into the mix, culminating in a final showdown between Ji-hyuck and Cho that reveals the former’s vendetta to go much deeper and more personal.

To Choi’s credit, the scenes leading up to the heist itself pulse with some degree of suspense, especially as we learn of just how Cho had intended to ‘swap’ the cash with some worthless coupons he had printed at the timbre company which he had acquired just a few months back. But even in these earlier scenes, there is something missing. For one, the characters seem barely defined. Ji-hyuck is portrayed as somewhat of a loner who had a close father figure and is quite obviously interested in a girl who is some art curator, but these attributes don’t quite build into anything coherent, let alone compelling. Ditto for Cho, who comes off as a cartoonish villain incapable of reaching the kid of stature or notoriety which the film wants us to believe that he has.

Alas those looking for the big heist to provide some sort of payoff will also be disappointed. However the facility could be a top security facility is entirely above us, for it seems that our band of thieves break no sweat in breaking into it. Same goes for the cracking of the safe itself, which is over and done with too easily. The rest of the ‘bait and switch’ lacks the attention to detail that it needs to be convincing, especially as Kim clearly fumbles in juggling several threads at the same time - Ji-hyuck, Cho, Cho’s right hand man and the police.

That same shoddiness extends to the rest of the movie as well, as Kim goes through the motion showing how Ji-hyuck had stayed one step ahead of Cho all this while (as if we weren’t already fully aware of it). But what makes it an utter disappointment is how the film ends not with a punchline, but with a MacGuffin, which here is in the form of Ji-hyuck’s relationship with that father figure whom he only shares one scene with, but which we are eventually told was his very motivation right from the very point he chose to rob Cho’s jewellery store. There is no attempt to build any poignancy out of a supposed poignant one, which only serves to leave its audience wanting.

The same can be said of Kim’s performance – notwithstanding his star turn in the popular drama series ‘The Inheritors’, his acting here is frustratingly opaque, even more so because the entire film is built around his one character. Choi clearly plays to Kim’s fans here, but those who are not already converts will find little to be similarly enamoured. It would certainly do the film every good to spend more time on developing its two criminally underused supporting actors, Go and Lee, both of whose characters we end up being much more curious about than Kim’s.

Of all the qualities a caper shouldn’t be, perhaps the one that stands out is being dull, but that is exactly what ‘The Con Artists’ is. Its very title is a misnomer, for all it seems to care about is to glorify its lead star Kim Woo-bin, for which he (naturally) receives top billing. It doesn’t give enough for us to care about its characters, and it never delivers on a satisfying payoff, in particular given that its sleight of hand is really quite slight. In the end, what promises to be a caper turns out to be a sleeper, so you’ll be best advised to find your escapist fantasies somewhere else.

(A caper that isn’t as smart, engaging or witty as it wants itself to be, especially as it rests too heavily on the false laurels of its lead star Kim Woo-bin) 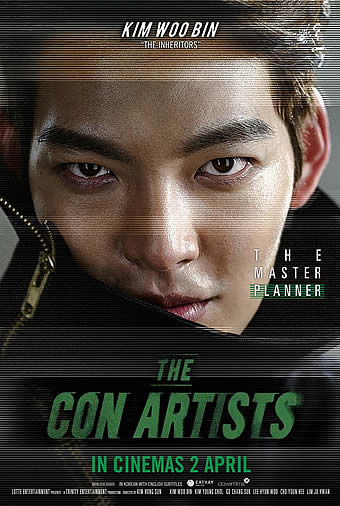