Synopsis: When long-term Congressman Cam Brady (Will Ferrell) commits a major public gaffe before an upcoming election, a pair of unscrupulous power brokers plots to put up a rival candidate and gain influence over their North Carolina district. Their man: naïve Marty Huggins (Zach Galifianakis), director of the local Tourism Center. At first, Marty appears to be the unlikeliest possible choice but, with the help of his new benefactors’ support and a cutthroat campaign manager, he soon becomes a contender who gives the charismatic Cam plenty to worry about. As Election Day closes in, the two are locked in a dead heat, with insults quickly escalating to injury until all they care about is burying each other. It’s a mud-slinging, back-stabbing, home-wrecking comedy from “Meet the Parents” director Jay Roach that takes today’s political circus to its logical next level. Because, even if you believe campaign ethics have hit rock bottom…there’s still room to dig a whole lot deeper.

If you aren’t a fan of comedies like Anchorman: The Legend of Rob Burgundy (2004), Talladega Nights: The Ballad of Ricky Bobby (2006) and Blades of Glory (2007), we are suggesting that you sit this one out. After all, not everyone subscribes to funnyman Will Ferrell’s brand of humour. Having first established himself as a comedian on NBC sketch show Saturday Night Live in the mid 1990s, Ferrell has since made a name for himself as one of the “Frat Pack” members, alongside fellow comedy actors like Jack Black, Ben Stiller, and brothers Owen and Luke Wilson.

Here, he teams up with up and coming comedian Zach Galifianakis (go check out “Between Two Ferns with Zach Galifianakis”, a series of videos on the “Funny or Die” website where celebrities are asked bizarrely inappropriate questions), where they play two Southerners vying for a seat in Congress to represent their small district.

We are glad the local movie distributor has decided to bring this comedy to our shores, considering how Ferrell’s last big screen outing Casa de Mi Padre was not screened here. As one would expect, there is a large dosage of crude humour in this movie. Add political humour to the mix and what you get is 85 minutes of crazy fun. The digestibly accessible runtime also means that the punchy tempo does not make you feel dreary by the time the film’s end credits come on.

There are portions of this comedy which shows us realities of modern day politics. Whether it’s the unscrupulous measure both parties go to just to make each other look bad (watch out for the viral campaigns the two men conceptualised to spite each other) or the somewhat pointless appearances at public events just to get that newspaper space, you’d be reminded of how dirty the political game can get.

Physical comedy is one highlight you can’t miss as well. Laughs are guaranteed at Ferrell’s unfortunate encounters with a baby and, well, without giving too much away, a star from the Oscar winning The Artist (2011).

What we also love about this recommended comedy is the supporting cast. We have John Lithgow (TV’s 3rd Rock From The Sun, Rise of the Planet of the Apes) Dan Ankroyd (Ghostbusters, Yogi Bear) and Brian Cox (Match Point, The Bourne Supremacy) hamming it up, indulging themselves in silly fun alongside Ferrell and Galifianakis. As campaign managers, Jason Sudeikis (Horrible Bosses, Hall Pass) and Dylan McDermott (TV’s The Practice, The Messengers) give their best shots at comedy.

The show inevitably belongs to Ferrell and Galifianakis. The chemistry between the two men is spot on, and the deadpan and straight faced expressions provide over the top laughs. This may not be a smart political satire (you shouldn’t expect that when jokes involving fireflies in butts and snake bites resulting in ridiculously swollen arms are involved), but the raunchiness is exactly what you’d look forward to seeing from the two men, who have previously made you holler in laughter with shows like Step Bothers and The Hangover.

If the abovementioned titles only made you cringe in disgust and contempt, we are strongly recommending you staying far, far away from this latest laugh a minute movie.

ANCHORMAN: THE LEGEND OF RON BURGUNDY (2004)
Back 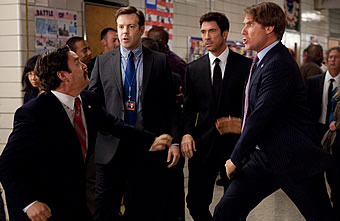 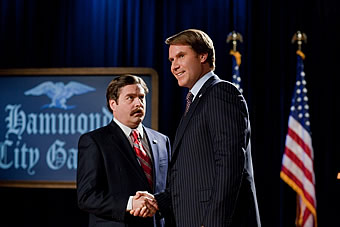