Synopsis: A young American named Greta (Lauren Cohan) takes a job as a nanny for an 8-year-old boy in a remote English village. To her surprise, Greta learns that the child of her new employers is a life-size doll. They care for the doll as if it was human, which helps the couple to cope with the death of their own son 20 years earlier. When Greta violates a list of strict rules, a series of disturbing and inexplicable events bring her worst fears to life, leading her to believe that the doll is alive.

The Boy is the newest January horror release, being directed by William Brent Bell, who previously directed other mediocre horror films like Wer and The Devil Inside. It is a tale that features a creepy doll that, maybe, is alive. Hearing about this movie, you are probably laughing with hysteria, making pre-judgments such as Annabelle rip-off, another bad January release. But I assure you. This movie is shockingly better than expected, at least for the first 2 thirds.

The Boy is about Greta, played by The Walking Dead’s Lauren Cohan, an American who takes a job as a nanny in a remote English village, away from an abusive boyfriend by traveling all the way to a distant corner of the British countryside. She soon finds out that the family's 8-year-old child is actually is a life-sized doll that the parents care for just like a real boy. After disobeying some rules, a series of unusual occurrences forces her to believe that the doll is actually alive.

As the concept of a haunted doll being highly unoriginal, due to its predecessors Chucky from Child’s Play and Annabelle from The Conjuring, The Boy’s plot comes off as a lazy rehash. However, unlike the critically panned 2014 Annabelle movie, this film actually manages to do what horror films are intended to do - provide the viewers with good scares. Major props to the director, William Brent Bell. A technical positive is evident consistently throughout the film, which is how the film manages to guide our eyes. Shots transition seamlessly. Bell could have taken it to a more clichéd route, with multiple cheap jump scares or using found footage, instead, he choses to use filmmaking techniques that are utilized in traditional horror classics. This led to the film bringing back old and familiar vibes. The film also has a creepy atmosphere for at least two thirds of the film. Due to his well direction, the film has suspense and all the scares work.

The film also has high production value for a low budget horror film. The shots are beautifully filmed, contributing much to the tension for the scares. This is credited to the cinematographer, Daniel Pearl. But the high production value is the ultimate reason. The premise of the film takes place in an old castle like building, leading to much intrigue in the plot.

Despite it being already a huge surprise at how well directed and cinematographed the film is, the script by Stacey Menear is for the most part actually good. For the first two thirds of the film, plot points do not come off as cheesy unlike other horror films made today. There is even a bit of humor placed in the film, which makes fun of itself. There is well-crafted dialogue that does keep audiences engaged at what is on the screen.

Speaking of dialogue, a major plus point is the actors working on the film. Cohan manages to make Greta relatable, while the other actors such as Rupert Evans and Jim Norton do a good job. A huge standout of the film is the boy, the doll itself - at first viewers were mocking its initial appearance but soon some were even covering their eyes when the doll is on screen.

However, despite the aforementioned praise for the first two thirds of the movie, it was the last third, the ending, which steered the film into disappointment. Not only was the edgy and creepy tone totally replaced by a rather unsatisfying and stupid one, it also erased much of the scare factor that was created before it. This left many chuckles at how nonsensical the ending was. Even if it did comply with the rules that the film sets, there is too much cliché and elements that lead to even more questions that deviates the film off course. ‘The Boy’ would have been a far more disturbing film if it did not sway from its original path.

Another negative, but minor, is being the overuse of nightmare sequences. Despite bringing great scares, it would have been better if they weren’t all taking place in someone’s head.

Overall, The Boy is not as bad as what is expected and shown from the trailers. It is a surprising gem in the dumping ground of release date, aka January, for horror movies or even movies in general. But for it to be a shining gem, the last third of the film must be erased. It is a very entertaining film and satisfies what a horror movie should be doing. 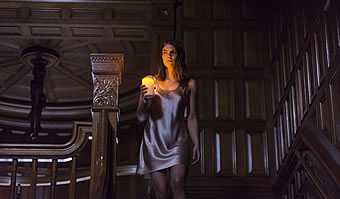