Synopsis: THE AWAKENING is set in 1921, in a post-war England where many of the bereaved seek solace in spiritualism.

Haunted by the death of her fiancé, Florence Cathcart (REBECCA HALL) is committed to debunking supernatural claims, using methodical and rational explanations. When she is asked to visit a boarding school in the countryside called Rookwood - to investigate the alleged sightings of a ghostly young boy - she feels compelled to take the job.

Once at Rookwood, she sets to work, laying traps and gathering scientific evidence. Gradually secrets begin to unravel and the mystery surrounding the ghost appears nothing more than a schoolboy prank. As Florence is set to leave, however, she experiences a chilling encounter that defies all reason. One of the schoolmasters, Robert Mallory (DOMINIC WEST), worries about Florence?s disposition in the aftermath. The incident leaves her scared and confused, but she is determined to get to the bottom of it and decides to stay on while the rest of the children go home for Christmas.

She is not alone, however, as three others stay on with her: Maud (IMELDA STAUNTON), the matron, whose initial request had brought Florence to the school; Tom (ISAAC HEMPSTEAD-WRIGHT), a young boy whose parents cannot care for him over the break; and Mallory, who, having recently fought in the Great War, is plagued by visions of the past.

Over the coming days the blurred image of a child-like ghost haunts Florence and she begins to doubt her resolve, increasingly unable to provide any logical explanation for the bizarre goings-on. As her bond with Mallory deepens, they are drawn to one another by their shared sense of loneliness and together they ready themselves to face their demons.

Styled in the manner of old-school British ghost movies, first-time director and co-writer Nick Murphy builds his debut around the age-old premise of a skeptic coming face-to-face with the very horror that she, in this instance, has so religiously debunked. The setting for her encounter is a sprawling mansion which used to be home to a wealthy but dysfunctional (aren’t they usually?) family before its conversion into a boarding school- where apparently the ghost of a child murdered years before has caused the recent death of a pupil and left the rest of the boys spooked.

Adopting a period setting of post-World War I, where both the War and influenza have claimed the deaths of more than a million Brits, Murphy imagines a backdrop of grief with phonies claiming to be able to communicate with the dead. It is in this context that our protagonist and self-proclaimed ghost hunter Florence Cathcart (Rebecca Hall) comes in- and the opening sequence shows Cathcart posing as a bereaved and assisting the police in cracking down on these swindlers, even though whether her actions were ultimately constructive for the mourning is questionable.

Cathcart’s vehement denial of the spiritual is challenged by Robert Mallory (Dominic West), a teacher at the aforementioned boarding school who invites her to visit and find out the truth for herself. Turns out Mallory was sent by the school’s matron, Maud (Imelda Staunton), who professes to be a fan of Cathcart’s books and her learnedness in an environment where girls were seldom sent to school. With science as her tool, Cathcart promptly sets up her elaborate equipment of chemical powders, trip wires and electromagnetic fields.

As you can probably imagine, Cathcart’s first night doesn’t go uneventfully, but her devices enable her to shed more light on the pupil’s death as well as to conclude that the boy she saw running around the compounds was no more than an ostracised boy bullied by his schoolmates to scare her. Nonetheless, that’s not the end to it, as the second and more terrifying half of the movie unfolds when all but one of the boys, Tom (Isaac Hempstead-Wright), leaves for home during their midterm break.

Besides the obvious conclusion that there is indeed the ghost of a young boy prowling the compounds, Murphy weaves an intriguing domestic tragedy into the mix and turns the horror from one that is supernatural to one that feels real and immediate, centred as it is around parochial expectations of male heirs in the family’s bloodline. It also happens to be intimately linked to Cathcart, and puts into perspective why she was invited in the first place as well as the disturbing and seemingly unrelated illusions she is often plagued with from time to time.

The twisty revelation has earned its fair share of detractors, but up-and-coming Brit actress Rebecca Hall is the reason it works. Better known as one half of Woody Allen’s ‘Vicky Cristina Barcelona’, Hall makes her character’s fear and trepidation keenly felt, especially when she realises that the very answer to the mystery may lie in the painful past buried in the deep recesses of her mind. Her supporting actors are equally solid, in particular Staunton (think Dolores Umbridge from the ‘Harry Potter’ movies) whose role turns out surprisingly complex and interesting towards the film’s final moments.

And all through the movie, Murphy keeps up a tense atmosphere that draws you in and keeps you hooked. Seasoned horror fans will probably recognise most of the scares before they come, but there are still some nifty setpieces- including one where Cathcart gazes in terror through the windows of a doll’s house modelled after the very one she is in. The cinematography from d.p. Eduard Grau is also notable, and a pivotal scene in which Cathcart relives her traumatic past is exceptionally well-shot.

Comparisons no doubt will be made to ‘The Woman in Black’, another similarly old-school styled British horror picture- though it’s hard to say which the better movie is. Instead, both offer its fair share of bone-chilling moments and taut atmospherics, while offering a story that’s probably been told in many other similar genre offerings before. Still, if you’re in the mood for a good mystery and the occasional jolt in your seat, you’ll find just what you are looking for in this supernatural chiller.

(Yet another old-school British horror pic after 'The Woman in Black', this supernatural horror offers its fair share of chills alongside taut atmospherics and an intriguing mystery) 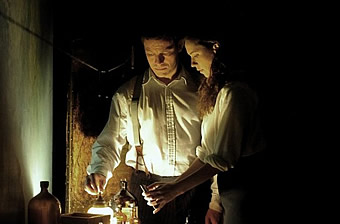 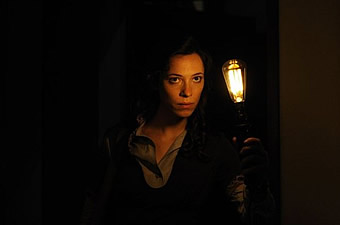 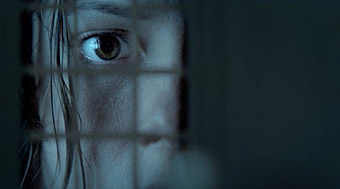 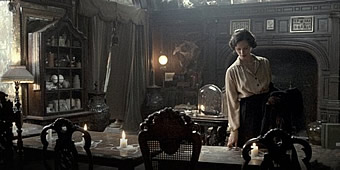