Synopsis: Captain Ahab (HA Jung-woo), who works for private military company Black Lizard, is tasked with carrying out a top secret mission for CIA. His mission is to infiltrate a secret underground bunker 30m below Korean DMZ and take out a target. The mission immediately derails when the target turns out to be none other than Supreme Leader of North Korea himself, who has incredibly high bounty on his head. Ahab and his 12 men go in for the jackpot against CIA’s wishes. Unbeknownst to them, another PMC squad is after the same target and Ahab has to work around CIA’s aerial strikes that put him and his men in immediate and present danger. The bunker is demolished and Ahab is in critical condition. When the Supreme Leader suffers a devastating injury, he has no choice but to team up with an elite North Korean doctor (LEE Sun-kyun) to not only save himself but his target and get out of the bunker in one piece!

Hats off to the South Korean filmmakers who never seems to run out of ideas on the political tensions between the North and the South. Directed and written by Kim Byung-woo and set five years into the future, Take Point is yet another action thriller depicting the uncertainty of the troubled two states. Throw in some political juggernaut from the US and China, and you have one hell of a loud, numbing flick that desperately tries hard to tell a meaningful story.

Ha Jung-woo last seen in the Along With the Gods series plays Captain Ahab, leader to a group of mercenaries from a private military company (PMC) who is being tasked by one of CIA agents, Mac (Jennifer Ehlefrom Fifty Shades of Grey) to abduct a North Korea General from a secret underground bunker near the DMZ who has plans to defect. As it turned out, it’s not the General who is in the meeting. In fact, it’s the Supreme Leader himself who is present. When a far stronger and heavily equipped PMC hired by China is also fast gaining on them to capture the Leader, Ahab must decide sacrificing his men or continue with the mission before everything went awry.

Since the entire movie took place in the underground bunker with hardly a scene that cuts to the outside world, the proceed of the story relied heavily on the exchanges between Ahab and Mac and countless scenes of newscasters on the TV screens. The audiences are led to believe that there are actually many conspiracies happening behind that leads to why Ahab is in such a danger predicament. It’s a case of bringing out the Supreme Leader alive or face death. Why the political career of the President of the United States of America is hanging by the thread and why China is secretly pulling the strings behind the operation? Kim’s screenplay tends to be overambitious, manipulating and hardly convincing in the way how things turned out.

It’s all confusion, meddling that all the crossfire between all parties seem intangible after a while. Even the endless barrage of gunfire sequences hardly pulls you into the action as Kim frequently edit and piece up angles shot from surveillance drones, CCTV and from the first-person perspective. This is not exactly a movie version of a videogame adaptation isn’t it?

And the most ludicrous of all is having our leading man, Ahab being stuck to the control room aka bathroom for the most part. You see he is suffering from a gunshot and to make things worse, his crippled robotic leg is rendered almost useless. Thus he is being relegated to being the controller- shouting orders and directions to his last surviving men via headsets and controlling surveillance drones. Veteran actor Ha Jung-woo attempts his best to portray a man who believes in leaving no men behind but with his beliefs contradicting reality, he is constantly in a dilemma until he met the doctor of the Supreme Leader, Yoon (Lee Sun-kyun), a selfless man who has no qualms sacrificing himself for the greater good.

It’s difficult to get excited over a movie liked Take Point. Sure enough, there are non-stop exhilarating but obnoxious action scenes to please gamers and action fans. However, Kim’s pretentiously depiction of the political ongoing makes it a challenge to thoroughly enjoy the flick.

(It’s basically a subtle message about uniting the North and the South against the superpowers. Take Note not Take Point!) 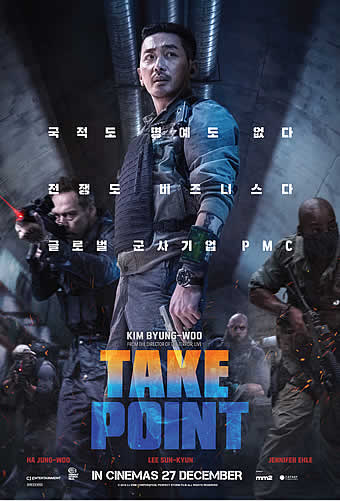