Synopsis:  After seven years of marriage, Suzzanna finally gets pregnant. Her husband, Satria, is out of town on a work trip when robbers break into their house. They attack Suzzanna and bury her body in the backyard. Strangely, Suzzanna appears the next day at home, as if the previous day’s events did not happen. Will she exact bloody revenge on her murderers?

Asian spirits frighten because their appearances always allude to a terrifying cause of death. In the case of the sungei bolong from Javanese folklore, it is a woman with long flowing hair which covers a bloody hole in her back. It is believed that they were those who got pregnant out of wedlock, and died having a miscarriage; or when in their grave, gave birth to a baby who came out their back, thus the hole. I know - yikes.

Buried Alive is based on 1981’s Sundel Bolong, starring Indonesia’s favourite scream queen Suzzanna Martha Frederika van Osh. The classic was a riot of effects, considered cheap by today’s standard, but left an indelible mark on viewers with its imagery. One scene even had the ghost feast on satay, before the vendors flee in fright after seeing meat and gravy drip out of her back.

To say this is a tribute is not an understatement. In one scene, an outdoor screening plays the original Sundel Bolong. In a few others, the spirit mysteriously swallows a jasmine flower after every kill, alluding to the rumours that the actress actually ate them to maintain her youth. It’s tidbits like these that don’t distract from the story, yet offering those in the know some easter eggs, that give Buried Alivean extra edge. That said, one adulation went too far.

Lead actress Luna Maya had to endure over three hours of prosthetics to increase her likeness to the late actress - an odd decision given that directors Rocky Soraya and Anggy Umbara, as well as producer Sunil Soraya picked her for her resemblance.

Maya struggles to act past her make-up, and if you thought someone had too much botox, I don’t disagree - the effect is the same. This is one literal stiff upper lip that makes the intense close-ups really uncomfortable to watch, especially with the excessive dubs of minor gasps and moans.

Maya’s soap opera roots also show. Her exaggerated body acting gives conflicting results. With its kitschy styling, the showy acting adds to a wonderful throwback experience. But in other scenes, usually the ones between husband Satria (Herjunot Ali) and herself, it is awkwardly cheesy.

Also somewhat questionable, are the goon characters that punctuate the show. There are two coming from the burglars who eventually bury Suzzanna alive, but her domestic helpers are also portrayed as half-wits. There are killer punchlines tucked within the banter, like the one where the three servants argue over a death shroud, but most of the goof feels disjointed from the narrative.

And while It remains a mystery why the characters sleep with the light on, Buried Alive boasts some of the best production values to be seen from the country in recent times, and an artful styling that comes from experience in campy horror films from the 80s. That scene with Suzzanna flying off with a severed head is gold.

The film adds itself as a strong candidate to Indonesian horror, and I greatly appreciate it leveraging upon local lore and superstition, than hitchhiking on western formulas or tropes. It is just a pity that the tribute prosthetic ultimately was the effect that distracted from the impact.

(Well-produced Indonesian horror that gets bogged down by a rubbery addition, that erases the build in some scenes) 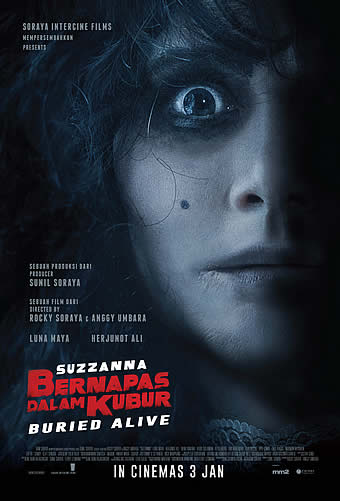 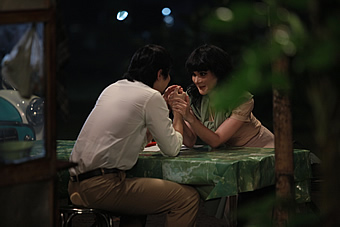