Synopsis: From the Director of FOURTH PORTRAIT and PARKING, SOUL is an unsettling thriller which takes an unflinching look at demonic possession. A-chuan is a quiet 30-year-old chef working in a Japanese restaurant. One day he abruptly collapses unconscious and is rushed to a hospital. He is then sent back to his father’s home in the mountain to recuperate, where he remains catatonic and mute, until one day…

Here’s an intriguing premise - a Taipei sushi restaurant chef collapses one day while at work, is diagnosed as having had a nervous breakdown, sent to live with his father up in an isolated mountain, and then murders his sister while claiming that his body is now being inhabited by a stranger. There are many ways writer-director Chung Mung-hong could have sliced such a setup, but his choice ultimately proves vacuous and alienating, offering little answers in a meandering psychodrama that isn’t as smart as it wants to be.

Consider this fair warning for those looking for some straightforward thrills - there isn’t any to be found here, despite some pretty gory scenes. Instead, Chung mounts a psychological thriller that attempts to meditate on life, death, and family, based not only on the aforementioned character of A-chuan (Joseph Chang), but also the effect that A-chuan’s actions have on his elderly father Wang (Jimmy Wong). Yes, this is as much A-chuan’s story as it is Wang’s, though the motivations of either one of them are left frustratingly ambiguous in Chung’s attempt to be arthouse cool.

Instead of reporting his son’s heinous deed to the police, Wang proceeds to cover up his daughter Aya’s murder, burying her beneath his orchid garden high up in the Lishan mountains. Wang also decides to keep A-chuan under lock and key in a shed near the garden, while lying to those who come poking around just where Aya is - including her husband (Leon Dai) whom he offs on the spot, A-chuan’s classmate-turned-policeman Hsiao Wu (Vincent Liang), and Hsiao Wu’s superior Yang (Tou Chung-hwa). It’s telling from Wang’s actions alone that he isn’t as simple as he may seem to be, and true enough, Chung saves that as a pivotal revelation which changes the nature of the relationship between father and son.

Those familiar with Chung’s previous works ‘The Fourth Portrait’ and ‘Doctor’ will recognise the filmmaker’s affinity for such father-son relationships, but his latest goes one step further by treading on the line between fantasy and reality. We’ll leave you to decide just what is which, including whether A-chuan is indeed demonically possessed or if he is simply repeating the sins of his father; it is apparent that Chung’s intention was never to paint the answers to these questions in clear strokes, but his deliberate lack of clarity here undermines what could have been a tense and engaging character study of psychosis.

What Chung does well though is to dress his movie up prettily. Doubling as cinematographer under the pseudonym Nagao Nakashima, Chung evokes a haunting atmosphere through his lensing of the mist-covered hills, deep vibrant colours of the vegetation within and tactful use of shadows in the night scenes. Chung’s control of the mise-en-scene is impressive, and probably why the film was chosen as Taiwan’s official entry for the Best Foreign Language Film at the Oscars last year.

If only then he had exercised the same grasp over his own script, which as it is, remains elusive and hazy. Wang exudes a chilly menace throughout, while Chang remains too clean-cut to convince, but ‘Soul’ isn’t made or broken by their performances; rather, as both writer and director, Chung bears the responsibility for a deliberately obtuse movie that borders on arty pretension. We warn you again - don’t go in expecting a mainstream horror; if you’re going to try to appreciate it, the best advice we can give is to go in with an open mind. 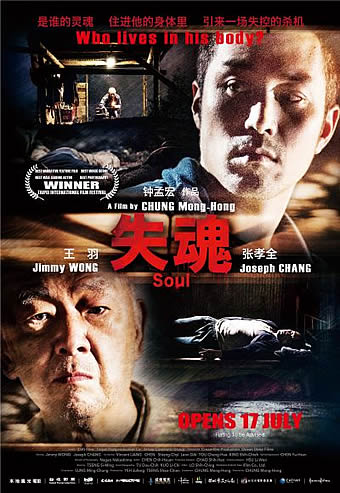