Synopsis: Skiptrace follows Bennie Chan (Jackie Chan), a Hong Kong detective who has been tracking notorious crime boss Victor Wong for over a decade. When Bennie’s goddaughter Samantha (Bingbing Fan) gets into trouble with Wong’s crime syndicate, Bennie must track down the man whose actions got her there: the fast-talking American gambler Connor Watts (Johnny Knoxville). Bennie soon discovers, however, that in bringing Connor back to Hong Kong he’s ensuring more than his goddaughter’s fate; Connor also possesses knowledge about Victor Wong that, if exposed, could finally bring the corrupt businessman to justice. As Bennie races against the clock to return with Connor to Hong Kong, the unlikely pair embarks on an entertaining and perilous adventure that spans from the mountains of Mongolia to the dunes of the Gobi desert.

No matter that it was filmed largely in China, ‘Skiptrace’ hews closer to the Hollywood action comedies that Jackie Chan was making for a predominantly Western audience in the early 2000s than the big-budget Chinese historical epics that he has been making thereafter. Like ‘Rush Hour’ or ‘Shanghai Noon’ therefore, Jackie is here accompanied by an American sidekick whose main and perhaps only purpose is to serve as his comic foil – and that honour this time round has been bestowed on ‘Jackass’ star Johnny Knoxville. Yet even though it plays completely according to formula by allowing Jackie and Johnny to bicker and joust together and against each other, there is something distinctly diminishing about their ‘odd-couple’ enterprise this time round, such that the Renny Harlin-directed film is never quite as exciting or amusing as it needs to be in order to be entertaining.

To be sure, it does begin on a high by introducing Jackie’s Hong Kong police officer Bennie Chan in the midst of a raid on a drug trade happening in one of Tai-O’s stilt houses. Recycling a gag from ‘CZ12’, Jackie has an unexpected run-in with a dog that causes his cover to be blown, and the ensuing melee sees Jackie spring quickly into action dodging bad guys while trying to apprehend the key persons in the exchange. It is nothing spectacular to be frank, but seeing Jackie do what he does best is always a treat. Oh, and so is the nostalgia one gets from watching Michael Wong onscreen, in a supporting role as Bennie’s superior Captain Tang who chastises him for the failed operation and for suspecting that the respectable businessman Victor Wong (Winston Chao) might be the criminal mastermind known as ‘The Matador’ whom Bennie vows to take down personally for causing the death of his beloved partner Yung (Eric Tsang in a glorified cameo).

Just as Jackie, Johnny’s character also gets an extended introduction that establishes him as the disarmingly charming hustler Connor Watts, who arrives in Macau with Russian gangsters on his heel for owing a debt to their boss Dima. Connor is twice unwittingly caught up in Victor’s affairs – first, via the stunningly gorgeous Samantha (Fan Bingbing), who is soon unveiled to us as none other than Yung’s daughter gone undercover to avenge her father; and second, by being at the wrong place and the wrong time to have seen Victor shoot dead a female with apparently incriminating evidence against the latter, which also explains why he opts to go with the Russians later on. It is this turn of events that sets Connor up as a prized witness for Bennie as well as a target whom Victor sends his henchmen (led by Leo Ku) to eliminate.

Bennie’s initial run-in with the Russians that kicks off the middle act is probably the most lively action sequence among the three elaborate ones that Jackie stages throughout the course of the movie. From the middle of a bowling lane where Bennie rescues Connor strung upside down, to the narrow cobble-stoned pavements of a Siberian town, and finally to the cramped assembly floor of a factory in the business of manufacturing Russian dolls, Bennie tries to evade the much heftier-sized Russians while keeping an eye on Connor to make sure he does not slip away. Jackie is as playful as ever in these scenes, whether stuffing Connor in a bin and rolling him down the pavements or using a life-sized Russian doll to evade the blows of a tough leather-clad female opponent dubbed the ‘Siberian Terminator’ (Eve Torres), but this is unfortunately also the point where it (sometimes literally) starts going downhill.

Because Jackie has taken it upon himself to be China’s unofficial ambassador to the world, ‘Skiptrace’ also carries with it his motivation to showcase the sights and cultures of the more native parts of China. And so, even though it defies narrative logic, Bennie’s trek across China with Connor back to Hong Kong will include a dinner-and-dance with a Mongolian tribe where Jackie will perform Adele’s ‘Rolling in the Deep’ (believe that!) as well as a stopover at a Yunnan village where the people happen to be releasing ‘kongming lanterns’ that evening and celebrating the ‘Mud Festival’ and ‘Hundred Family Feast’ in the morning. In between, Bennie and Connor sneak their way on board a train, drive a rickety two-seater vehicle into the Gobi Desert, row down a fast-flowing river on a raft buoyed by inflated pig skin and even spend a night in a cave spooning each other to keep warm.

Yet even with these opportunities for bonding, one never gets a real sense of camaraderie between the two travellers. That is partly because Jackie often takes the moral high ground chastising Connor for not being a ‘man of honour’, partly because Johnny spends most of his time scowling for being dragged against his will across China, partly because the script by first-time writers Jay Longino and Bendavio Grabinski lacks character depth, and also because Jackie and Johnny do not quite share enough chemistry to turn the antagonism between their characters into the sort of ‘love-hate’ relationship that the movie needs. As a result, Connor’s change of heart later on feels obligatory, be it a newfound sense of honour that motivates him to speak up for the truth or a renewed sense of loyalty towards Bennie to help a ‘brother’ in time of need.

Ditto the final setpiece set at a shipyard in Hong Kong – notwithstanding a late twist on the identity of ‘The Matador’, the action feels tired and uninspired, even with Jackie doing a lot of running around. His best sequences have always had an operatic grace and order to them, but Jackie’s last hurrah here lacks elegance and comes across haphazard – and is even overshadowed by a girl-on-girl showdown between Torres and Mainland actress Zhang Lanxin. That is even more disappointing considering how Jackie and his director Renny (of ‘Die Hard 2’ and ‘Cliffhanger’) are supposed to be pros at staging such high-wire acts, but seem content to go out in a middling way here.

Alas that sentiment is true of the movie as a whole – especially surprising given how Jackie has said he has taken 25 years to make this – which ultimately lacks the screen rapport (between Jackie and Johnny) so sorely needed to make the buddy-comedy pop. By the time he finally got this made, Jackie too seems exhausted, and those looking for his usual level of energy or inventiveness will surely go away empty. Even on the level of the Hollywood action comedies Jackie used to make, this probably ranks among one of his least, not as dire or embarrassing as ‘The Spy Next Door’ but not quite much better than ‘The Tuxedo’. This is no ‘CZ12’ for sure, and seeing as how Jackie has already lined up ‘Railroad Tigers’ for the end of the year, you’ll be better off waiting for that than this ‘Rush Hour’ reject neither fun nor thrilling enough to even justify a fourth instalment under the banner.

(Jackie Chan and Johnny Knoxville don’t share enough chemistry to make their ‘odd-couple’ comedy work – and unfortunately, the action hardly makes up for it) 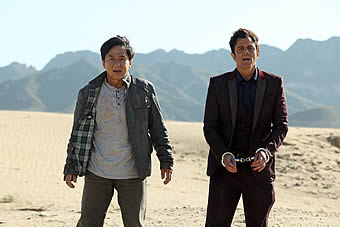 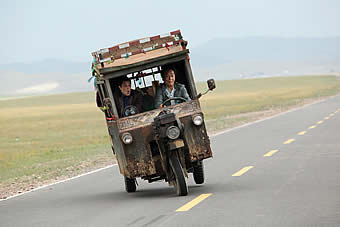 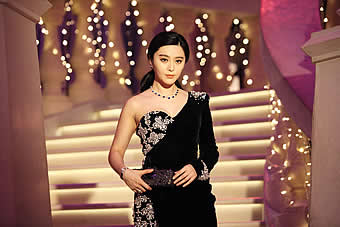