Synopsis: When Shaun decides to take the day off and have some fun, he gets a little more action than he baa-rgained for! Shaun’s mischief accidentally causes the Farmer to be taken away from the farm, so it’s up to Shaun and the flock to travel to the Big City to rescue him. Will Shaun find the Farmer in the strange and unfamiliar world of the City before he’s lost forever?

There are absolutely no pre-requisites to enjoy a show like Shaun the Sheep the Movie. After all, it’s the latest brainchild from Aardman Animation, the company behind Chicken Run and Wallace & Gromit.

Let’s start with a little history about Shaun before we delve further, shall we? Shaun the Sheep was originally a minor supporting character from the Wallace & Gromit television series but it became so popular that it had his own spin-off bite-size series. And now the unusually bright sheep with a flair for drawing (not necessarily the biggest in terms of size) has his very own full-length feature. Not bad for a virtually non-verbal character.

Free from the shackles of a big Hollywood studio like DreamWorks (the dreaded Flushed Away) and Sony Animation (the tedious CGI Arthur Christmas), Aardman is back doing what they do best in this often-hilarious adventure. Directed and co-written by Mark Burton (Gnomeo & Juliet), Shaun and his fellow sheep mates are tired of the mundane life at the farm and decide to have a “day off”. Of course, the plan went awry with the farmer ending up with amnesia in the big city. And now it’s up to Shaun, his gang of woolly friends and the farmer’s loyal dog, Bitzer, to save the day - provided they are not round up by the big bad containment officer, A. Trumper.

Even with the advancement of technology over the decades, Shaun the Sheep the Movie remains painstakingly low-tech (stop-motion being a manual labour-intensive process etc), which reminds us why we fall in love with the exquisite craft in the first place. A small facial gesture might take weeks to create in the studio and it’s all the more remarkable to watch them displayed endearingly on the big screen.

With original founders, Nick Park and Peter Lord sitting it out this round, the picture continues to deliver a handsome amount of fun gags and goofiness in the grand tradition of Aardman. For example, a delightful, laugh-out-loud sequence takes place in a fancy French restaurant and a sinister looking dog pound inhibited probably by the city’s most menacing animals. There’s also a nice, memorable music sequence - the hilarious baa-bershop quartet. Bear in mind there’s absolutely no celebrity voices - just grunts and growls and the occasional pop songs. In other words, it’s a very visual thing for the audience and somehow it works wonder for the entire 85 minutes.

Aardman Animation might have a close competitor in recent years - their American counterpart, Laika Animation, that is responsible for stop-motion hits such as Coraline, ParaNorman and Boxtrolls. Laika stuff, while not necessarily weaker, just happens to be slightly darker. However, Aardman’s titles are instantly charming in the way they handle the characters and infectious humour, very Mr Bean-like and perfect for everyone in the family. At the end, who wouldn’t mind a whimsical claymation full of British wit.

(Irresistibly cute and inventive, Aardman raises the baa once more!) 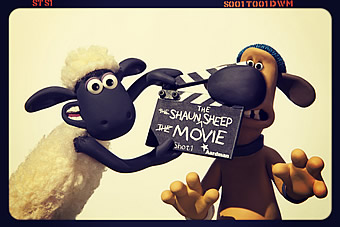