Mention of this film locally has quickly drawn reference to crispy pork belly (even from my editor), given how similar the two are when spelled out. But this is a film review and not a food review so all jokes aside…

On the name, director Lee Yong Zoo explained, “Emperor Qin of China was a man obsessed with the idea of immortality. He dispatched his trusted servant, Seobok, to search for the elixir of eternal life. I named this film after the servant because he represents humanity’s desire to overcome death, and the destined failure.”

Widely-anticipated for the epic sci-fi premise and A-list appearances by Gong Yoo and Park Bo Gum, Seobok has all the ingredients for a blockbuster. And judging by the design, the producers at CJ ENM and Studio101 are reaching for international attention too.

Following the story of former intelligence agent Ki-hun (Gong Yoo) who is tasked to become personal bodyguard for a top-secret specimen, the film explores the juxtaposition of two creatures in wildly different circumstances together.

One is a terminally-ill man who is afraid of dying. The other, Seobok (Park Bo Gum) is a cloned human who is immortal. Imagine the conversations those two might have!

So it is with some disappointment that Seobok for me doesn’t get its hands dirty in the theme. More often than not, the film skims the surface of the conundrum life and death brings, approaching it more wistfully than earnestly, and going all philosophical without much meat.

There’s some great moments here no doubt. During a scene by the beach as they wait out their pursuers, Ki-hun admits that he “is not sure whether I really want to live or am I just afraid to die.” It’s a great reflection, but the conversation kind of ends there, with the two looking at the ocean.

But what the script lacks in terms of depth, the actors make up for them in their acting, especially for Gong. Having lost significant weight for his role, the flawless actor delivers the troubled anti-hero with a fantastic performance rich with complexity. Even before his secret is uncovered, his defensive glances and weak posturing suggests a cowardly man unlikely to save the day.

Park delivers a weaker (though still decent) performance compared to his co-star, but this might have more to do with his script than his skill. As a clone who has unexpected superhuman side effects from his genetic modification, the young actor exhibits a talent in displaying heart-breaking vulnerability and animalistic manicism in his first screen protagonist role. A pity most of his screen time was milked for sympathy than actually letting us in on more of his person.

But Seobok still is a very impressive project. The action here is plentiful. The villains, deliciously easy to hate. The main themes of sacrifice, still very moving. The audience will no doubt be thrilled by the delivery of the epic fight scenes.

With a polished production and a standout score by Jo Young Wook, Seobok proves that good entertainment will always be timeless. 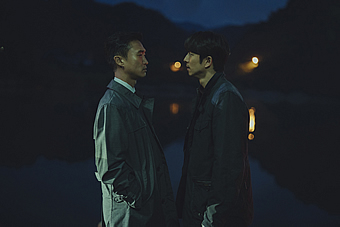