Synopsis: Three scouts and lifelong friends join forces with one badass cocktail waitress to become the world’s most unlikely team of heroes. When their peaceful town is ravaged by a zombie invasion, they’ll fight for the badge of a lifetime and put their scouting skills to the test to save mankind from the undead.

At one point in the horror comedy ‘Scouts Guide to the Zombie Apocalypse’, the chubby, dorky Augie (Joseph Morgan) steps in front of a zombie about to eat him and succeeds in distracting it by singing Britney Spears’ ‘Hit Me Baby, One More Time’, just because the latter happens to be wearing a Spears’ T-shirt and was probably a big fan before its turning. If this is the sort of humour that tickles your funny-bone, then you’ll have much to love about Christopher Landon’s spoof, which unabashedly milks its basic premise of three boy-scouts and a cocktail waitress battling a horde of hungry zombies in their small town for juvenile laughs and gross-out gags.

How else would you describe the sight of the horny wise-ass Carter (Logan Miller) getting his ass eaten out by his zombified elderly neighbour (played by Cloris Leachman)? Or that of Carter stopping to fondle a pair of zombie breasts? Or that of the earnest good guy Ben (Tye Sheridan) hanging on for dear life from a window by the rubbery penis of a zombie? Notwithstanding that the titular Scouts are a trio of tenth graders who happen to be the only three members in a sorry little troop led by the hapless David Koechner’s leader Rogers, there is no doubt that Landon – who co-wrote the movie with Carrie Evans and Emi Mochizuki – has gone all out to make sure that his zombie comedy is as gross and puerile as can be.

To his credit, Landon does in fact spend some time at the beginning detailing the relationship among the scouts to good effect. Though they have been scouts since their elementary years, Ben and Carter aren’t really interested in the merit badges or the sport in the first place; instead, they have stuck with it out of loyalty to Augie, who is still reeling from the death of his father two years ago. Alas with their junior year of high school approaching, Carter is keen to avoid social suicide by quitting the scouts, but with Ben’s persuasion, has agreed not to tell Augie until at least after their latest campfire outing. Carter however is much less persuaded to skip a big senior dance, and pleads with Ben to ditch their campout after fires out to go to the supposedly super-secret party.

Not surprisingly, it is at the abandoned warehouse where the party is held that the movie finds its climax, with our khaki-clad sophomores turning into unlikely heroes to save the day (or should we say, night). In between, they team up with a leggy, shotgun-toting cocktail waitress named Denise (Sarah Dumont) to blast their way through the slowly rampaging hordes of the walking dead – and oh yes, if you’re not quite taken by our three male leads, there’s always Dumont in a tank top and short shorts to keep your eyes glued to the screen. The strip club where Denise works, the county police jail cell, and Carter’s house are three of the major set-pieces where Landon stages the dirty, gross and perverted gags that you’ll either love or hate.

Indeed, this is the sort of film that is easy target for critics, who will likely pick it apart for what it is and dismiss it for what it isn’t or what it was never meant to be. In no way does Landon’s resume presage such an entry, but the filmmaker best known for writing three of the ‘Paranormal Activity’ sequels is not out to create a smart, subversive genre satire like ‘Zombieland’ than a true-bred adolescent male gross-out comedy complete with breast grab and penis yank. If you have to know, the relative unknown central actors display good camaraderie, and their story of tested friendship does make them more endearing; nevertheless, such are not the elements that you should be counting on in a movie like this, so check your expectations at the door and you’ll likely find this teen comedy as witlessly entertaining as you’d expect it to be.

(Gross, puerile and even mildly offensive - but really, why should you expect any less?) 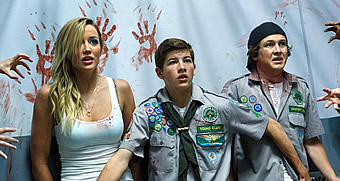 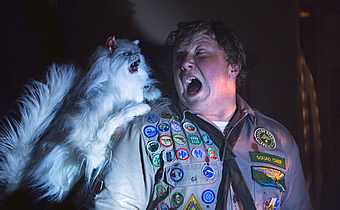