Synopsis: 1941. Since the Japanese occupation, China had become a wartime intelligence battlefield for the Allies and the Axis Powers. Iconic actress Jean Yu (Gong Li) returned to Shanghai, ostensibly to appear in the play "Saturday Fiction" directed by her former lover. But what was her true aim? To free her ex-husband? To gather intelligence for the Allied Forces? To work for her adoptive father? Or to escape from war with her lover? As she embarked on her mission and as everything spiralled out of control, Jean Yu started to question whether to reveal what she had learnt about the imminent Pearl Harbor attack...

Two years after it was unceremoniously yanked from domestic release, iconoclastic Mainland Chinese filmmaker Lou Ye’s arthouse spy thriller ‘Saturday Fiction’ finally finds its way onto the big screen. That alone would likely attract some curious audiences eager to find out why the infamous national censors took umbrage at this movie, although we would caution the casual viewer from simply thinking that it is some companion piece to Ang Lee’s ‘Lust, Caution’.

Despite boasting a star-studded cast including Gong Li, Mark Chao and Joe Odagiri, ‘Saturday Fiction’ is not intended for the mainstream; rather, Lou’s emphasis remains on the artistic, weaving two novels – namely, ‘Death of Shanghai’ by Hong Ying and ‘Shanghai’ by Yokomitsu Riichi – into a black-and-white drama filmed in digital, edited disjunctively and through a roving handheld camera. Together with Zeng Jian’s slick cinematography, Lou has fashioned a gorgeously evocative chamber piece that is great to look at but somewhat impenetrable to less artistically enamored viewers.

The setting is 1941 Shanghai, or more specifically a week before the Japanese attack on Pearl Harbour. There, within the part of Shanghai known as the ‘Solitary Island’ where the British and French concessions still retained wide autonomy (despite the Japanese controlling the rest of the city), the famous film actress Jean Yu (Gong) returns to star in the titular play at the Lyceum Theatre. Her director Tan Na (Chao) is delighted at reuniting with his former partner, but it suffices to say that things are hardly as simple as they look.

Demanding no less than utter patience from its viewer, the events which unfold shed light not just on Jean’s hidden agenda but also on that of the others close to her, including the play’s producer, an obsessive fan (Huang Xiangli) whom she agrees to let in for rehearsals, and a French father figure (Pascal Gregory). Although the pieces do largely fall into place over the course of the film, you’ll firstly need to be ready to let the dense plot befuddle you, particularly as every single character proves more deceptive than what he or she may first appear to be.

At the risk of stating the obvious, you should also know that the plotting hardly leaves any room for action right up till the very end, so those looking for gunfights for a change in momentum will have to wait for the finale. In the lead-up though, Lou packs the movie with plenty of hushed intimate exchanges and play-within-a-film scenes, setting the stage (pun intended) for the string of revelations over the latter half of the movie. Like we said, it demands patience all right, but those who do will probably find themselves rewarded at the end with a palpable lesson on identity, loss and betrayal.

If there is one thing that would keep you watching, it is Gong Li’s magnetic performance as the character around which the espionage unfurls. Reminding us yet again why she is the most luminous actress of the fifth generation of Chinese cinema, Gong owns the screen with her trademark sensitivity, and is simply mesmerizing transforming in the final reels into a gun-wielding firebrand. The other actors are competent in their own right, but Gong easily outshines and outclasses all of her fellow performers to reinforce her status as nothing less than a screen legend.

Truth be told, we wish there were a bit more urgency to the storytelling, but we’re glad we preserved till the very end. Like his other film ‘Shadow Play’, Lou uses a pivotal moment in the history of China to ruminate on how these events have ultimately had a bearing on the identity of postmodern China. Because Lou isn’t fond of being straightforwardly patriotic, that message may have been lost on the censors, which therefore resulted in its two-year hiatus; still, for the sheer joy of seeing Gong Li in a major film role, as well as to bask in its vivid depiction of wartime Shanghai, you’d find the wait was quite worth the while.

(For the patient viewer, this arthouse spy thriller will prove rewarding for its slow-burn byzantine plotting, as well as a simply magnetic performance by screen legend Gong Li) 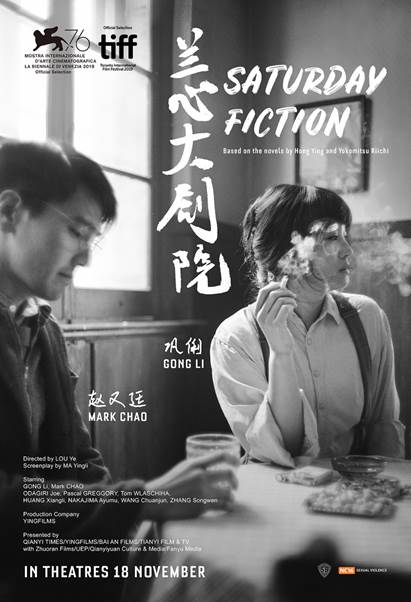