Synopsis: From the director of Chocolat and the Oscar-winning(R) screenwriter of Slumdog Millionaire comes the inspirational comedy "Salmon Fishing in the Yemen". When Britain's leading fisheries expert (Ewan McGregor) is approached by a consultant (Emily Blunt) to help realize a sheikh's (Amr Waked) vision of bringing the sport of fly-fishing to the desert, he immediately thinks the project is both absurd and unachievable. But when the Prime Minister's overzealous press secretary (Kristin Scott Thomas) latches on to it as a "good will" story, this unlikely team will put it all on the line and embark on an upstream journey of faith and fish to prove the impossible, possible.

You may not immediately take to a movie with such an odd-sounding and admittedly clunky title, but let that not deter you from catching this perfectly quaint and utterly endearing feel-good romantic comedy. Indeed, one should expect little less from screenwriter Simon Beaufoy, who is best known for writing the rousing ‘Slumdog Millionaire’ and the similarly uplifting British pictures ‘The Full Monty’ and ‘Miss Pettigrew Lives for a Day’- even though purists of the original Paul Torday novel may cry foul at the liberties he takes with the source material.

For the uninitiated, the 2007 novel was sharp political satire, its title intended to convey the very absurdity of the premise- that of a Yemeni sheikh who enlists the help of the British government bureaucracy to introduce the sport of fly-fishing to his homeland. The last thing on his mind was realism, and Torday opted for straight-out farce as he detailed how the politicians used that project to try to boost their own public image in the face of consistent bad news from the Middle East.

Presumably calculated to appeal to a more international audience, Beaufoy and director Lasse Hallstrom have defanged the satire in favour of a gentle crowd-pleasing comedic fable. Essentially, the pair amp up the romance between two instrumental players of the sheikh’s fantastical endeavour- the buttoned-up fisheries expert Dr Alfred Jones (Ewan MacGregor) and the lively consultant Harriet Chetwode-Talbot (Emily Blunt) engaged by the sheikh to make his dream happen.

True to the staid civil servant he is, Alfred initially pooh-poohs the idea, but some political pressure leaves him no choice but to put his head into realising what he politely terms ‘theoretically possible’. Together with Harriet, Alfred will overcome the attendant complications of the (pardon the pun) ‘upstream’ task- identifying a consistent stream of water for the fish, finding 10,000 North Atlantic salmon, and overcoming the government bureaucracies- even as the both of them find solace in each other’s company while navigating their own troubled personal lives.

It’s the well-worn cliché of opposites falling for each other while working side by side, but the familiar setup fortunately does not feel one bit stale in the hands of MacGregor and Blunt. There is genuine chemistry between the two stars, both of which are clearly relishing not just their own quirky roles but also each other’s mutual company. So often playing the charming rogue, MacGregor seems to be enjoying the change of pace playing an uptight character with a thick brogue that goes extremely well with his punchy one-liners. Blunt is disarmingly ravishing as always, and the easygoing rhythm between her and MacGregor is quite simply the movie’s most winning quality.

While MacGregor and Blunt fish for love in each other’s waters, Hallstrom brings into sharp focus the PR plays behind the scene, courtesy of the Prime Minister’s chief spin doctor Patricia Maxwell (Kristin Scott Thomas). Thomas’ character is the closest in tone to Torday’s book, and the British actress is in excellent form playing the sharp-tongued politician with acerbic disdain. Beaufoy rewards Thomas with some of the best lines in the movie, and Thomas’ astute delivery ensures that they lose none of the bite they are supposed to bring.

Despite its witty pleasures, Thomas’ bits are nonetheless jarring in a movie that revels in its geniality. Where satire once was, Hallstrom brings a message of faith and purpose, illuminated by the central task of bringing salmon fishing to the Yemen as well as the transformation within both Alfred and Harriet’s lives. Like Alfred’s unhappy marriage to an inattentive wife or Harriet’s worry over a boyfriend lost in action in Afghanistan, belief in what seems impossible seems to be the key- and Hallstrom’s speciality in such whimsical feel-good stories ensures that the message is conveyed both gently and yet persuasively.

Not that this tale doesn’t have its rough edges- a woefully underdeveloped and awkwardly inserted subplot about some terrorists who try to assassinate the sheikh and later on hijack his plan is seriously out of place- but Hallstrom knows that the hook here is the warm schmaltzy tale of love and hope blossoming in the unlikeliest of places through the most impossible of tasks. With delightful performances by MacGregor and Blunt, an inspirational story from Beaufoy and an assured affectionate touch from Hallstrom, what’s not to believe that salmon fishing is indeed possible in the Yemen?

(Boasting some winning chemistry between Ewan MacGregor and Emily Blunt, this sweet and quirky tale of faith and hope is delightfully quaint and utterly endearing) 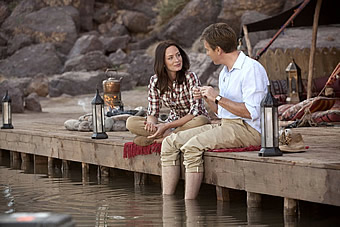 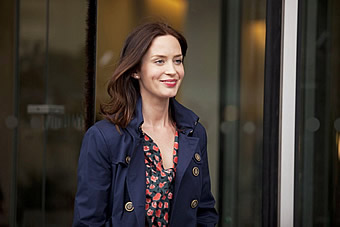 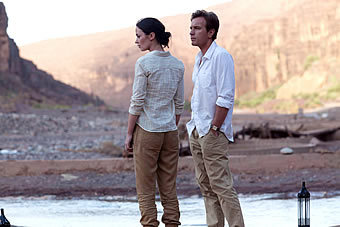 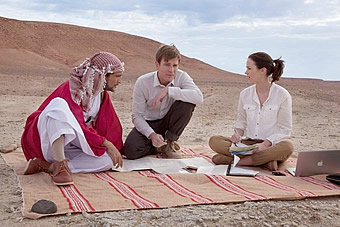