Synopsis: Kevin Hart and Ice Cube lead the returning lineup of "Ride Along 2", the sequel to the blockbuster action-comedy that gave us the year's most popular comedy duo.

Aside from the fact that it pairs two ‘black’ actors as mismatched partners, ‘Ride Along 2’ offers nothing that you haven’t already seen in previous buddy-cop action-comedies – and oh yes, that includes those which starred two ‘white’ actors, like Will Ferrell and Mark Wahlberg in ‘The Other Guys’. Worse still, it is a tired and witless sequel that seems content to rehash the formula of the original, so despite that Kevin Hart’s talkative cop wannabe Ben Barber is now a bona fide Atlanta rookie officer, the reason why Ice Cube’s glowering veteran detective James Payton agrees to bring him along on assignment is once again to get rid of the “dwarf”.

That assignment is excuse to relocate the action from their hometown to Miami, where they find themselves up against the successful businessman cum well-regarded philanthropist Antonio Pope (Benjamin Bratt). A suaver villain than the former’s Laurence Fishburne, Antonio is under that seemingly perfect façade a drug dealer and weapons smuggler, whose biggest mistake was to employ a greedy hacker named AJ (Ken Jeong) as his tech specialist. It is in pursuit of AJ that James and Ben have made the trip down to the Magic City, where they team up with Miami P.D.’s hottest female officer Maya (Olivia Munn) to weed out Pope and his entrenched cronies – including the city’s port commissioner – from the power structure.

Except for one car chase that sees Ben putting his ‘Grand Theft Auto-like’ video-game experience into action, the rest of the action set-pieces are as lazily executed as the script from two of the original’s credited screenwriters. There is a foot chase through the back alleys of Little Havana that is copiously edited to make Jeong look like he’s some mini-Jackie Chan. There is a shootout at a nightclub that is staged with little sense of continuity. And oh, the finale is yet another poorly choreographed shootout, this time at the docks where Pope foolishly chooses to implicate himself by showing up with a couple of henchmen next to containers of smuggled goods. Like we said, the action, like the plot, is largely by-the-numbers at best, which leaves only the comedy and chemistry between Hart and Cube.

Sadly, neither delivers as it desperately needs to. The lines from writers Phil Hay and Matt Manfredi are stale and half-baked, and repeat ad nauseum Hart’s clowning routine next to Cube’s growling presence. To both actors’ credit, they still give it their all, but their characters are so thinly defined that even their considerable talent struggle to make up for the none-too-funny scenarios and opposites-attract repartee. If it feels as if Cube has done the same thing but better, you’re right – Cube has done the no-nonsense serious-cop shtick to much, much more amusing effect in the two ‘Jump Street’ movies; and as for Hart, well let’s just say his stand-up comedies have more laughs than both the ‘Ride Along’ movies combined. As much as we love their odd-couple pairing, there is only so much that Cube and Hart can do to breathe life into the obviously strained proceedings.

If it’s more of the same you seek, then you may just find ‘Ride Along 2’ right up your alley; but anyone expecting at least that the filmmakers would try something a little different or better with the sequel will be most sorely disappointed. Certainly, even as a standalone movie, Tim Story’s buddy-cop action comedy flails and fails to breathe life into a formula that is as established as it is well-worn. Because we have seen what they can do, we know that ‘Ride Along 2’ squanders the potential of the Cube-Hart pairing that we saw better glimpses of even in its predecessor. When even they need Munn to ooze sex-appeal from time to time to bail them out, you know that this ride’s in trouble. 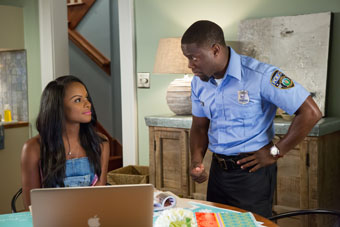