Synopsis: Way before he ever met Shrek, the legendary Puss In Boots goes on a heroic journey, teaming up with mastermind Humpty Dumpty and the street-savvy Kitty Softpaws to steal the famed Goose that lays the Golden Eggs. It’s the adventure of nine lifetimes!. Movie Review:

It’s not usually a good thing to let the cat out of the bag, but in the case of the swashbuckling feline ‘Puss in Boots’, it’s probably the best thing that DreamWorks Animation has done. When Puss first appeared in 2004’s ‘Shrek 2’, the dashing kitty stole the show from the titular ogre and his donkey pal- though in the subsequent two entries, the scene-stealing sidekick was not immune to the declining charms of the franchise. Thank goodness then that Pussy finally gets his chance in the spotlight without the distraction of the rest of the Shrek ensemble, this solo outing a lively spirited return to the playful allure of the character’s origins.

Taking more than a leaf from the Spaghetti Westerns, screenwriter Tom Wheeler casts Puss as the outlaw framed for a crime he did not commit. The reference to the genre is clear right from the beginning, as Puss casts a long, mysterious shadow at the door of a noisy crowded bar before walking in like the lone enigmatic traveller in a Sergio Leone western. But Puss is no laconic drifter- on the contrary, he is a smooth-talking Casanova with a lyrical Spanish accent, a Zorro-like feline character if you must know. Antonio Banderas is once again the voice of Puss, and the Spanish actor does a marvellously seductive purr with his accent. Truly, you’ll be hard-pressed to find another voice for Puss, Banderas effortlessly making the character his very own.

Like the ‘Shrek’ movies, Puss’ story borrows irreverently from the beloved fairy tales of Hans Christian Andersen and the Brothers Grimm. Here, Puss’ tale of adventure sees Jack and Jill (Billy Bob Thornton and Amy Sedaris respectively in full redneck mode) as a pair of hulking outlaws with thoughts of settling down and having a human baby; as well as Humpty ‘Alexander’ Dumpty (‘The Hangover’s’ Zach Galifianakis) as Puss’ erstwhile best friend turned enemy who recruits Puss to steal three magic beans that will help make good their past misdeeds. Oh and in between the mishmash of fairy tales is the magic beanstalk, the goose with the golden eggs and Mother Goose as a Godzilla-type which in the finale threatens the sleepy South-western border town of San Ricardo.

It’s a packed ensemble all right, every frame bursting with colourful characters and delightful action that will keep the tots entertained from start to finish. Director Chris Miller (who co-helmed the lacklustre ‘Shrek 3’) impresses in his sophomore directorial attempt, never letting the proceedings get too frenetic for their own good. Instead, the action-packed story wows with standout sequences such as Kitty’s pursuit of the sassy cat burglar Kitty Softpaws (Salma Hayek) across rooftops, balconies and alleys; Puss’ and Kitty’s daring canyon heist of the magic beans; their equally thrilling theft of the golden goose; and last but not least Puss’ courageous attempt to save San Ricardo and its townsfolk from imminent destruction.

There is plenty of visual pizzazz throughout the movie, and Miller’s choice of split-screens and slow-downs for certain action sequences enhances the storytelling. Adult auds will additionally enjoy the sharply drawn characters and witty one-liners. Rather than rest on Puss’ laurels, Wheeler has sketched exciting new supporting foils. Humpty, for one, is a fascinating blend of good and evil, a complex character with a heart of gold often overwhelmed by his desire for acceptance, his envy of Puss and his greed for (erm) gold. His clumsiness and his intentions (is he a good egg or a rotten one?) are some of the film’s running themes, and also some of its best moments.

The rest of the latter are supplied by Puss’ romantic interest Kitty, who shares great chemistry with Puss. The slick-fingered seductress proves to be a worthy match for the quick-witted Puss, as much on the job as on the dance floor- and one of the most entertaining moments in the film is a sizzling flamenco dance-off between Puss and Kitty (choreographed by Laura Gorenstein Miller of L.A.'s Helios Dance Theater). Banderas and Hayek ooze with as much hot-blooded romantic tension as possible in a child-friendly animation, the pair clearly having a hoot bouncing lines off each other.

There are however more winking adult moments, such as allusions to a feline one-night stand and catnip that Puss explains away as for his glaucoma. But these are likely to fly over the heads of younger audiences, who will no doubt be taken with the non-stop dazzling action scenes- complimented by Henry Jackson’s energetic score, which mixes Leone riffs smoothly with flamenco guitar. Fun, lively, amusing and irreverent, it’s everything we loved about the ‘Shrek’ franchise before it went stale- and cat or dog lover, you’ll be glad that this kitty finally got its own solo spinoff adventure. 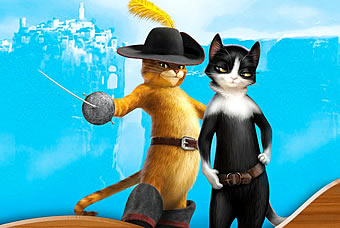