Synopsis: Ridley Scott, director of “Alien” and “Blade Runner,” returns to the genre he helped define. With PROMETHEUS, he creates a groundbreaking mythology, in which a team of explorers discover a clue to the origins of mankind on Earth, leading them on a thrilling journey to the darkest corners of the universe. There, they must fight a terrifying battle to save the future of the human race.

How thoroughly distressing it must be for Ridley Scott to watch one of his beloved creations desecrated by one filmmaker after another with each successively disappointing entry in the ‘Alien’ franchise, so much so that after a thirty-year hiatus from the science-fiction genre, Scott has decided once more to revisit the very series that has defined his entry into Hollywood. And what better way to return than to go all the way back, even before the point when the spaceship Nostromo first picked up that unknown signal from what seemed to be a desolate planetoid.

It should come as no surprise by now that ‘Prometheus’ is the first of a two-parter meant to explore the origins of the iconic extraterrestrial lifeform known simply as the ‘Alien’- but in doing so, Scott has also boldly attempted to uncover the very origins of human life. Where do we come from? Why are we here? Indeed, these are the big questions at the heart of the movie- though in the minds of ‘Alien’ fans, the more important question probably is this: How is the search for mankind’s beginnings related to the beginnings of another creature so far ahead in the chain of evolution?

Not many summer blockbusters have the gumption to play with such abstract ideas and concepts, so kudos to Jon Spaihts and Damon Lindelof for their ambition. Don’t expect however an easy answer at the end of the film- in fact, it’s likely that you’ll be left with even more questions than answers, a deliberate but undeniably effective ploy at whetting your appetite for the next one to come. Though not fully explored here, its thematic question of the nature of mankind’s creator- given our twin propensities for creation and destruction- is fascinating while it lasts and should serve well as intellectual fodder for the sci-fi geeks.

Nonetheless, it’s likely that they will be- like us- already geeking out at the similarities between this movie and ‘Alien’. In place of Sigourney Weaver is ‘The Girl with the Dragon Tattoo’s’ Noomi Rapace, the latter an archaeologist named Elizabeth Shaw whose discovery of similarities between ancient cave paintings from different parts of the world has led to the said life-finding expedition. Like Weaver, Rapace epitomises the strong-willed independent heroine- and nowhere is this more apparent than in a classic-in-the-making moment where Shaw climbs into an auto-surgery machine to remove a non-human foetus from inside her womb.

Similarly, Ian Holm’s Ash has found its equivalent here in Michael Fassbender’s android David, whose loyalties and humanness are just as necessarily suspect. Whereas Holm’s identity was kept hidden till halfway through the film, Fassbender’s is known right from the beginning- and that knowledge only makes you admire his class-act performance in human verisimilitude even more. Mirroring both his looks and diction after Peter O’ Toole’s in ‘Lawrence of Arabia’, Fassbender nails the portrayal of a half-human half-machine confused over its own identity, and is easily the standout among the ensemble cast.

Scott is fully aware that character is key for his audience to be invested in the adventure, so he avoids the obvious stereotypes in the rest of the supporting crew. Despite being Shaw’s academic and romantic other half, Charlie Holloway (Logan Marshall-Green) turns out to be on the opposite side of the fence in the debate between God and Darwinism. More than just another seen-it-all captain, Idris Elba’s world-weary Janek gets a nice heroic turn as things go from bad to bad-ass worse. And ice-queen Charlize Theron’s corporate rep Meredith Vickers turns out to be more than just another easy villainous target in a late twist that reveals much more to her background for Weyland Corporation, the company which had bankrolled the current voyage.

Just as in ‘Alien’, the dynamics between the various characters keep the pace humming and the tension rising- in particular when David’s agenda is finally revealed, together with the surprise appearance of Guy Pearce in almost unrecognisable makeup. Demonstrating his assuredness as a filmmaker, Scott juggles both the character dynamics and the story developments confidently. The first two-thirds of the movie basks in the same sense of eerie intrigue that made ‘Alien’ such a discomforting but utterly gripping watch, as Scott lets his audience acquaint themselves with the crew of the ‘Prometheus’ as well as the elaborately designed labyrinth of chambers and tunnels within which the imminent terror awaits.

The latter itself deserves special mention- Arthur Max’s set design is stunning, expanding H.R. Giger’s original designs of both the ‘Alien’ spacecraft to an entire subterranean world complete with a Mayan-temple like chamber that houses a humbling statue of a human head. Just as breathtaking are Dariusz Wolski’s epic vistas of the rugged planet, even more spectacular in 3D- demonstrating once again how the third dimension can be exploited to its full potential at the hands of filmmakers at the top of their craft. On top of it all is Scott, the once-commercials director continuing to impress as a visual storyteller, synthesising the cinematography, set design and art direction into one seamless and visually astounding whole.

Yet despite its strengths, it’s very likely that ‘Prometheus’ will still be greeted with some disappointment especially from fans looking for Scott’s return to the sci-fi genre to herald a seminal epic in the vein of ‘2001’. To be sure, it doesn’t reinvent the genre, even though its philosophical musings of creator and creation may suggest that it has something groundbreaking to offer. But it more than lives up to the legacy Scott had created with ‘Alien’, and this thoroughly gripping, edge-of-your-seat thrilling sci-fi horror breathes life once again into the ‘Alien’ mythology that no other entry since ‘Aliens’ has been able to.

(It isn’t the groundbreaking sci-fi epic some fans are hoping for it to be, but Scott’s return to the genre is a visually astounding, grippingly-told horror that thrills and intrigues as brilliantly as his original ‘Alien’ does) 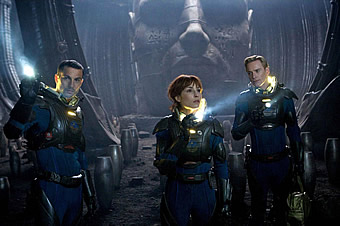 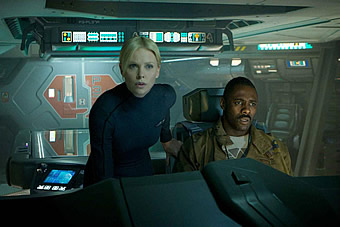 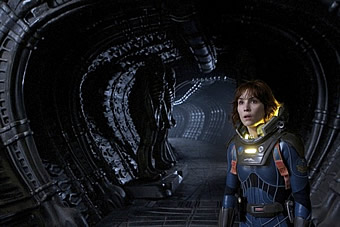