Synopsis: Keller Dover is facing every parent’s worst nightmare. His 6-year-old daughter and her young friend are missing, and as minutes turn to hours, panic sets in. The only lead is a dilapidated RV that had been parked on their street. Heading the investigation, Detective Loki arrests its driver, but a lack of evidence forces the only suspect’s release. Knowing his child’s life is at stake, the frantic Dover decides he has no choice but to take matters into his own hands. The desperate father will do whatever it takes to find the girls, but in doing so, may lose himself, begging the question: When do you cross the line between seeking justice and becoming a vigilante?

This writer will be honest with you – when he saw the runtime for this crime thriller film, he wasn’t exactly sure whether he would be able to sit through the entire movie without getting impatient and ending up fidgeting in his seat. After all, it has been a while since he watched a 153 minute movie. Looking at the cast list which includes Hugh Jackman, Jake Gyllenhaal, Terence Howard, Viola Davis, Maria Bello, Melissa Leo and Paul Dano, he told himself: this had better be good.

Academy Award nominated filmmaker Denis VIlleneuve (Incendies) directs a power ensemble to tell the story of a small town carpenter whose six year old daughter gets kidnapped on Thanksgiving. The unfortunate mishap also happens to his neighbour. With the two girls missing, a young, brash detective takes charge of the investigation and a series of incidents begin to unfold.

Like the critically acclaimed Incendies which was nominated in the Best Foreign Language Film category at the Oscars, this production is one that will have you at the edge of your seat, eagerly anticipating how the plot will develop next. What makes it even more gripping is how the filmmakers manage to weave in riveting dramatic moments which leave you pondering -  what does it take for one to lose his soul?

The Canadian film director and writer has a god sent ensemble to work with, and the main cast members deliver their career bests, without being too showy in their performances. The supporting roles played by Davis (The Help, Extremely Loud and Incredibly Close), Howard (Hustle & Flow, Iron Man) and Bello (World Trade Center, Grown Ups 2), you can see how they allow each other to shine whilst holding their own grounds. Be it Davisand Bello’s grieving mothers or Howard’s conflicted father, each of these fine actors will leave an impression on you. Dano (There Will Be Blood, Cowboys and Aliens) takes on the role of a crime suspect and gives a shockingly disturbing performance, while the always reliable Leo (The Fighter, Olympus Has Fallen) plays his caregiver.

Gyllenhaal has come quite far in his career since we first saw him in 2001’s Donnie Darko, and the range of roles he has tackled is nothing short of impressive. This time, he plays a weary crime fighter and don’t be surprised if he picks up acting nominations and prizes come awards season. Jackman is no Jean Valjean (Les Miserables) or Wolverine (X Men series) here, he disappears into the role of a common man who takes matter into his own hands when the system feels him. Driven by desperation, the Australian actor’s performance will have you wondering how far you would go to protect your family. This Jackman is not the buff beefcake you are familiar with – we are almost certain his performance will be duly recognised at the upcoming awards season.

Aaron Guzikowski pens the masterful script for Villeneuve’s first English language film, and the story is a thought provoking one. Award winning Roger A Deakins’ (The Assassination of Jesse James by the Coward Robert Ford, No Country for Old Men) cinematography is also a highlight in this highly recommended film, as every shot exemplifies the chilliness and loneliness of the movie’s setting. As the film’s end credits roll, you’d be left suitably disturbed by the emotionally powerful haunting human drama.

(Grippingly haunting, this emotionally absorbing drama is definitely one of the year’s best movies) 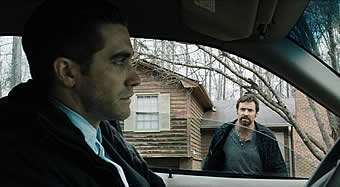 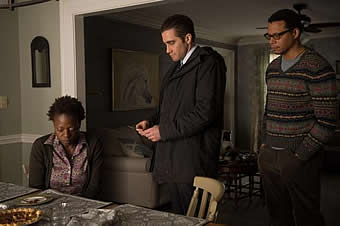 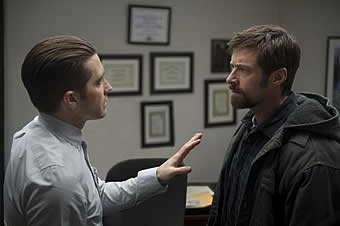 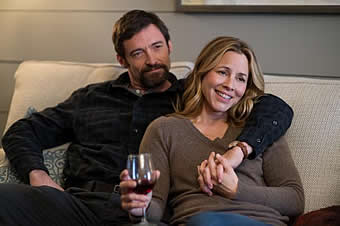 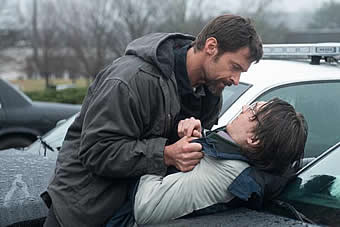 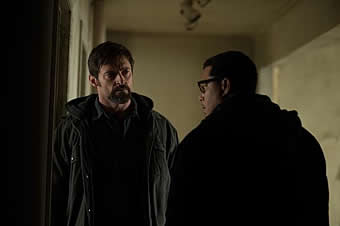