Synopsis: "Priest" is set in a world ravaged by centuries of war between man and vampires. Paul Bettany is Priest, a legendary warrior priest during the last Vampire War, who now lives in obscurity among the other human inhabitants in walled-in dystopian cities controlled by the Church. But when his 18-year-old niece is abducted by a murderous pack of vampires in the desolate wastelands outside, Priest breaks his sacred vows and ventures out to find her and seek vengeance upon those responsible, especially their brutal leader (Karl Urban). Priest is joined on his crusade by his niece's boyfriend, Hicks (Cam Gigandet), a local outpost sheriff, and Priestess (Maggie Q), a member of his former legion of vampire-killers who has otherworldly fighting skills.

Oh Paul, how in the world did you end up being the strange man/messiah whenever Hollywood approaches you to play along? Seems like even those rippling abs didn’t batter any eye for a more serious role in LaLa land. Not that Priest isn’t a serious film, helming from the much acclaimed Korean comic mister Hyung Min-woo, a story long told about an ancient war between man and vampires fought viciously by the legendary Warriors who were now hidden behind walled cities of The Church after much toll disappeared into the dark. But all is about to break loose when the savages abducts the niece of Warrior Priest. Upon being shun by the Church of the savages existence and not helping with his cause, he breaks his vows to find and save her with the help of the wasteland sheriff. Simple enough story isn’t it? That’s the reason why the film is a merely 88 minutes roller coaster. Doesn’t beat around the bush much and goes straight to the point. Sounds like how all film should go about raking its hair but unfortunately, it is also it’s demise.

Pretty much in stock of 16 volumes, dating back since 1998, the dark post-apocalyptic sci-fi western horror thriller that sets in an alternate world would have been an awesome satire to envelope us pretty much how Underworld did with medieval ages with modern times but unfortunately, the story takes a new route and pathed us a new way of an unknown timeline but still retain the western schlock of horror. Knowing Korean on how they love the theme of revenge, basing it on the movie atmosphere abound from the theaters, Priest, from its Comic form is basically a revenge storyline, avenging the death of his love one to all who were involved in the pact. A lone ranger going across the western desert, stopping at each city to dwell and fight the foe at hand and proceeding to the next. Very typical Korean action drama huh? Well i would have taken this storyline hook line and sinker anytime but alas, Hollywood ain’t so accustom to how Asians deal with violence.

Violence - A major draw on the film if done correctly. Much to how its drawn on the bounded papers of into the hands of the graphic novelist/comic dwellers, director Scott Charles Stewart, known for his previous work, Legion, (oh wait, that’s where I've seen this visually enticing spectre before. What a rip-off. Can you actual rip yourself off?) knowningly decided to strip off almost all of its uber violence of in hopes to get a lower rating to garner more appeal to the masses. Sadly the only visual cue of what shred of blood that can be seen are the muted dark liquid sprayed across the wall ( or was it because of the 3D glasses causing the visuals to be darkened?) and the entertaining illustrated intro, unfolding to tell the history of it all. Rippped heads, mangled body and all. It just too bad the whole film didn’t follow on the style of that nature.

Not that the set-up of Priest was anything to jeer about. Impressively stunning and apt was how the set was presented. Post-apocalyptic. Check. Western influence. Check. With a touch of modern application. Check. Would have loved to have more of such range as the duo went from one town to another and explore the era that unfolds. Its always such a joy to see a marriage of 2 genre that normally go together, end up being so awesomely spectacular, just like how they did Wild Wild West, with Will Smith or the up coming action flick Cowboys and Aliens.

All round of applause for all the roles presented throughout the film. With cast like Paul Bettany, Karl Urban, Cam Gigandet and Maggie Q, its hard not to diss about them, although the latter did feel much a cause for a proper gender balance for the whole scene. It’s rather important that such film, being in a realm of fantasy that one must not take oneself too serious. Luckily for all, roles were played out with such vigour and comic determination that it fit the bill and made the viewing so much more bearable.

Will this be a trend of genre that we’ll face in time to come? Has western attire made  a come back to the silver screen again with a twist? From the looks of it, it very well may be the case and i for one welcome it with open arms. But with such re-introduction of something good, hopefully it’ll be a more complete output to a new era. The one gripe i had with Priest is its running time and true enough, the film played out very much like a quick introduction of whats more to come in the future. A teaser if you may, to ease you into the world of apocalyptic western, gothic horror which if not played well will make the audience feel alittle cheated of the real story behind every character. Alot of questions are left unanswered or rushed to fill in in order to proceed with the storyline. Pray that the sequel that may come be fully fleshed out.

Oh, by the way, you should know that this is a post-production 3D conversion. You know what to do right?

(Won’t win any originality awards but it’s a definite popcorn entertainment. Let the fight between clergymen and vampires begin!) 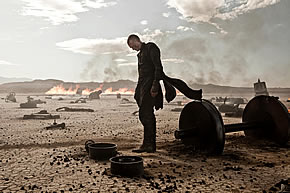 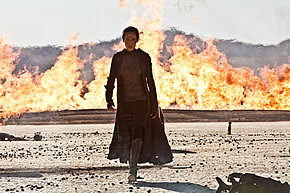 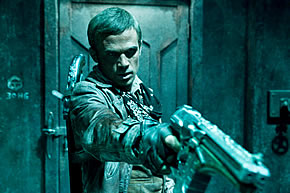