Synopsis: In the fast-paced, high-adrenaline action thriller “Point Break” a young FBI agent, Johnny Utah (Luke Bracey), infiltrates a cunning team of thrill seeking elite athletes --led by the charismatic Bodhi (Edgar Ramirez). The athletes are suspected of carrying out a spate of crimes in extremely unusual ways. Deep undercover, and with his life in imminent danger, Utah strives to prove they are the architects of a string of inconceivable crimes. The film is replete with the most daring athleticism ever seen in a motion picture. These action adventure feats are performed by elite athletes representing the world’s best in class in big-wave surfing, wingsuit flying, sheer-face snowboarding, free rock climbing, and high-speed motorcycling.

Raise your hands if you are craving for some 80s classic action remakes?

Like it or not, Hollywood is bent on shoving all these remakes down our throat despite the dismal box-office results of Total Recall (2012) and Robocop (2014). The latest to jump on the bandwagon is the reboot of Point Break, the long gestating project, which saw the likes of Jan De Bont and Gerald Butler attached and dropping out over the years. Back in 2008, Singapore was tipped to be one of the shooting locations but this had obviously been dropped as well.

Following the likes of the Hemsworth brothers, Sam Worthington and many more that came before them, the latest import from Down Under, Luke Bracey (The Best of Me) plays Johnny Utah (a role originally played by Keanu Reeves), a young FBI agent being assigned to infiltrate a gang of thrill-seeking criminals led by the charismatic Bodhi (Edgar Ramirez from Wrath of the Titans and Deliver Us From Evil). Believing all the wrongs they are doing are for the sake of nature, Bodhi and his gang go round the globe committing robberies and employing extreme sports to escape from the authorities.

This re-creation of the 1991 cult favourite basically retains the original idea and screenwriter Kurt Wimmer (Total Recall 2012, The Thomas Crown Affair 1999) does very little to tamper with it. Seriously very little. As you can see from Wimmer’s resume, the man has enough experience to reimagine classics for the contemporary audience or so we think. Instead of plain surfing, the current version showcases every extreme sports ever created on earth, and that includes motorcycling, wingsuit flying, snowboarding, free rock climbing and more and that by far is the only biggest departure from the original.

The original was a huge success, and till today, fans can still recall the iconic President masks' robbery sequence, skydiving and surfing stuntwork as well as Kathryn Bigelow’s incredible vision in delivering a macho thinking man action movie. Point Break 2015 on the other hand is more comfortable delivering adrenaline-driven action sequences than philosophy. Director Ericson Core who started his career in cinematography (The Fast and the Furious) and previously helmed the sports movie, Invincible, has the eye to shoot a couple of heart-racing sequences but he is pretty much out of his depth here. It’s cool to take a heist movie, repackage it and bring it to a higher level but we probably have seen too much of it especially in the recent Fast & Furious instalments to find the so-called grounded in reality, life-threatening stunts as performed by true professionals to be really exhilarating.

The experience of watching a movie is different from watching sports taking place on TV. Point Break aims to be an adrenaline-driven movie but ends up as a soulless picture with footages of extreme sports inserted in between. It sort of muddles the entire watching experience as the minute goes. You will never find any of the onscreen characters worthy of your time because Wimmer’s script and characters are wafer-thin. In the Patrick Swayze version, Bodhi is sort of a mystic, Zen-like creature but right here, the character of Bodhi only turned out to be some baloney sportsman who uses nature as an excuse to carry out his beliefs. Not only the story has let him down, we feel pity for the miscast Edgar Ramirez as he simply is not a match for the charismatic Swayze.

On the other hand, Reeves’ acting wasn’t that fantastic to shout about back in 1991. The pre-Speed fame star was an embarrassingly stiff young actor so Luke Bracey apparently got lucky. Warm Bodies star Theresa Palmer took on the token female role, English actor Ray Winstone plays field agent Pappas, a role originated by the wacky Gary Busey while Delroy Lindo plays a FBI instructor, a role probably given to Laurence Fishburne if he is not too busy.

On the bright side of things, Point Break features a series of lavish, well-shot action sequences that took place at far-flung locations in Venezuela, Austria and Italy. We can’t deny it indeed looks pretty breath-taking on the big screen; unfortunately this is the sole aspect of the remake that is noteworthy. While we applaud the movie’s attempt in bringing messages of eco-terrorism and radical environmentalism to the masses, the messages in the end are tragically buried under all the gigantic waves and action set pieces. The movie spends the entire duration delivering one exhausting sports sequence after another that any sign of a decent story is non-existent by the time Utah abruptly bids farewell to Bodhi. 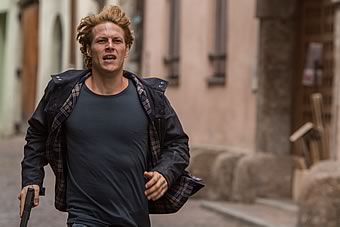 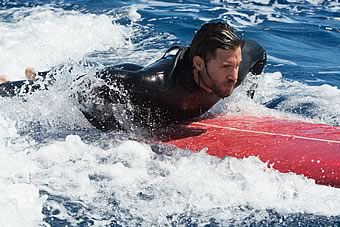