Synopsis:  Peppermint is an action thriller which tells the story of young mother Riley North (Jennifer Garner) who awakens from a coma after her husband and daughter are killed in a brutal attack on the family. When the system frustratingly shields the murderers from justice, Riley sets out to transform herself from citizen to urban guerrilla. Channelling her frustration into personal motivation, she spends years in hiding honing her mind, body and spirit to become an unstoppable force - eluding the underworld, the LAPD and the FBI- as she methodically delivers her personal brand of justice.

Like ‘Taken’, ‘Peppermint’ has as its lead protagonist a parent who decides to take justice into her own hands; although in this case, the motivation isn’t so much to rescue a loved one than to seek justice for the death of loved ones. Oh yes, as an extended flashback at the start of the film informs us, our anti-hero Riley North (Jennifer Garner) has had to endure the pain of seeing her husband and young daughter gunned down in a drive-by shooting, followed by the ignominy of a corrupt law and order system which lets the murderers walk away scot-free. So after a five-year disappearance, Riley is back in Los Angeles to exact her own brand of vengeance on those who have wronged her – not only the crooked cops, prosecutor and judge, but the very head of the drug cartel (Juan Pablo Rosa) who had ordered the killing in the first place.

As much as the occasional cutaways to TV news anchors debating the moral basis of Riley’s actions, this is less a socially conscious drama than it is a revenge thriller that sees the former ‘Alias’ and ‘Elektra’ female star return to ass-kicking mode. While Liam Neeson had the help of some buddies in ‘Taken’, Garner is essentially a one-woman army who is solely responsible for breaking into a store to steal military-grade weapons and ammunition, then staking out her victims one by one, and then taking them out in cold blood. The decade since 2005’s ‘Elektra’ hasn’t dulled her physicality and agility, and she more than convinces in the extended action show-pieces – there is one set in a piñata store, another at the drug lord’s mansion at night, and the pièce de résistance in the slums of downtown Los Angeles’ Skid Row area.

Alas the same cannot be said of her transformation from grieving wife and mother into hardened vigilante, which frankly comes off a lot less compelling than it needs to. Part of that has to do with writer Chad St John’s script, which doesn’t give enough attention to her grief and subsequent emotional evolution; part of that also has to do with director Pierre Morel (who was also the director of the very first ‘Taken’), who takes for granted that Garner’s natural appeal will translate to us rooting for her character; and part of that has to do with Garner herself, who doesn’t quite summon enough depth to her portrayal of Riley for us to connect to her character’s agony, bitterness and resolve that are fundamental to that transformation. Without a deeper sense of empathy, we can’t quite say that we can cheer her on as she blazes her path of vengeance against her enemies.

It is also for this reason that ‘Peppermint’ doesn’t rise above the trappings of a routine B-action movie. From ‘Taken’ to ‘From Paris With Love’ to ‘The Gunman’, Morel has more than enough experience to ensure that the movie flows efficiently from scene to scene, and keeps up a reasonably exciting pace throughout. But without a hero whose emotional struggle we can truly identify with and/or get behind, the film lacks a much-needed visceral hook. It doesn’t help that the rest of the characters are too simplistically sketched – whether good cop or bad cop or ruthless criminal – such that Riley isn’t ever drawn into some sort of dilemma as judge, jury and executioner. Whilst conveying urgency, having the proceedings unfold largely over the course of a single day (i.e. the fifth year anniversary of the shootings) also makes it less realistic, especially since she seems to be able to get from one killing ground to another relatively effortlessly.

It is clear from the ending that there is intention for ‘Peppermint’ to be the start of a series, just as ‘Taken’ had spawned a trilogy (though of diminishing returns, we might add). Still, it is hardly likely that those ambitions will come to fruition, seeing as how this supposed franchise starter barely stands out in a long line of revenge thrillers. Garner definitely possesses the physical chops for such a role, but she as well as the filmmakers need to dig much, much deeper for Riley to be notable. As it stands, Riley is as pedestrian as it gets, with perhaps the exception of a scene where she hits back literally at a snobbish mother who had caused her and her daughter some consternation. So too can be said of the movie named after her nickname, which is no more than an average B-actioner that is at best disposable time-wasting entertainment.

(As average as revenge thrillers get, this 'Taken' wannabe lacks a compelling hero for us to root for) 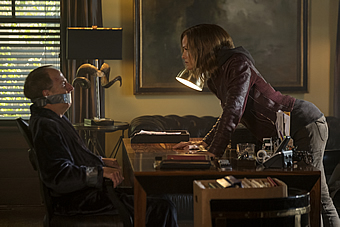