Synopsis: In this sequel, in which Kevin James reprises the role of Paul Blart, the security guard is headed to Las Vegas to attend a Security Guard Expo with his teenage daughter Maya (Raini Rodriguez) before she departs for college. While at the convention, he inadvertently discovers a heist—and it’s up to Blart to apprehend the criminals.

There was a time not so long ago when wholesome comedies like ‘Paul Blart: Mall Cop’ ruled the box-office roost – and that was also a time when comedians such as Tim Allen, Steve Martin, and even Adam Sandler were top draw. Sadly, humour in the cineplexes these days seems to be synonymous with vulgarness, so much so that every single movie feels compelled to out-gross its predecessor whether in language or antics. And so even though it has only been six years since Kevin James’ New Jersey security guard rode his Segway into the hearts of audiences, this sequel and its brand of family-friendly humour feels dated.

Yes, you would do well to remember that ‘Paul Blart: Mall Cop’ was never a ‘Bridesmaids’ or ‘The Hangover’ or ‘Horrible Bosses’ or ‘Ted’; rather, the mustachioed, huffy-puffy police academy washout was always meant to be an ‘aw-shucks’ underdog story. Sure, his insulin condition meant that he kept falling on his face or colliding with heavy objects, but Paul Blart was also at his core a hardworking man who took pride in his job and also a loving father to his half-Latina daughter Maya (Raini Rodriguez). For many audiences who made it a $183 million hit, that seemed good enough, so you can’t blame James (who also returns to co-write with Nick Bakay) or director Andy Fickman for sticking with formula.

So even though the setting is now the Wynn Las Vegas & Encore Resort where a security officers’ trade convention is underway, it is the same Paul that we are reunited with, who we learn in the opening minutes has been beset by a string of bad luck. Not only did his wife leave him after six days of marriage, Paul’s mother (Shirley Knight) was also shortly after killed by a milk truck. For that same reason, Maya doesn’t dare tell her father that she has been accepted to UCLA, for fear that he will feel even more alone and isolated; instead, she agrees to accompany him to Vegas, where he believes he has been invited to deliver the keynote speech.

A huge reason (and we’re not just referring to the size of James’ girth) for Paul’s popularity is his geniality, and the first half of the movie is perfectly content to coast by on that. In addition to his signature Segway, Paul gets to fumble with other non-lethal James Bond-type gadgets, such as a glue gun, one that spits marbles and another that releases beanbags. Never mind his wife who left him whom we don’t even get to see – Paul easily wins the attention of the hotel-casino’s gorgeous manager Divina (Daniella Alonso), who seems enamoured by his confident masculinity. There are no laugh-out-loud moments, just pleasant chuckles along the way, and a generous dose of James’ Everyman appeal that, at its very least, is never ingratiating.

Like the first movie, Paul gets to display his MacGyver-style instincts by foiling a criminal operation in progress. This time, however, Paul is also out to save his daughter, who is taken hostage after a wrong turn leads her to stumble upon a group of criminals stealing priceless artworks on display in the hotel. The ensuing cat-and-mouse game pits criminal mastermind Vincent (Neal McDonough in yet another stock villain role) and his goons against Paul and some of his fellow security buddies (including Loni Love, Gary Valentine and Shelly Desai) whom he first makes the acquaintance of at the trade convention. And just like its predecessor, the fun here lies in watching James attempt to be an action hero, sliding across floors, dodging bullets and Taser-ing his opponents.

And so, even though the laughs are not new or particularly inspired, this undemanding sequel to ‘Paul Blart: Mall Cop” does offer mild amusement so innocuous we cannot imagine it hurting anyone. If you like your laughs risqué, look elsewhere. But if you’re looking at something pleasant enough to bring the whole family to, well we can think of many worse ways than to spend one and a half hours with Paul Blart. Frankly, we cannot find anything to dislike about it, and that may in fact be the best compliment one can pay to this slick but forgettable rehash. 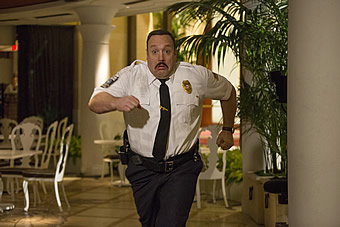 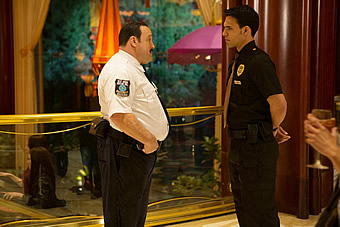