Synopsis: From the beloved novels by Michael Bond and producer David Heyman (HARRY POTTER), PADDINGTON tells the story of the comic misadventures of a young Peruvian bear who travels to the city in search of a home. Finding himself lost and alone, he begins to realize that city life is not all he had imagined - until he meets the kindly Brown family who read the label around his neck that says “Please look after this bear. Thank you,” and offer him a temporary haven. It looks as though his luck has changed until this rarest of bears catches the eye of a museum taxidermist.

Can you believe it has taken more than half a century for Michael Bond’s beloved literary creation Paddington to make it to the big screen? That’s not necessarily a bad thing in and of itself, as recent Hollywood bastardisations of ‘Garfield’ and ‘Marmaduke’ have proved; but those who had similar reservations of this live-action computer-generated adaptation can definitely heave a huge sigh of relief. With spot-on casting and much delightfully oh-so-British charm and wit, producer David Heyman (of ‘Harry Potter) and writer/director Paul King have made an utterly winsome family film that is as in tune with the sensibilities of modern-day children as it is with the nostalgia of those who have grown up (and old) with the character.

King and his co-writer Hamish McColl have kept the basics of Bond’s London-set stories: a small Peruvian bear with a soft spot for marmalade is found and adopted by the middle-class Brown family at Paddington station, hence inspiring the family to give him the name by which he would be known by. But to cater to the inquisitiveness of modern-day audiences, there is a more elaborate prologue than Bond’s books ever had, explaining how Paddington came to learn the language, the manners, and not forgetting to love the marmalade. So, instead of London, we begin in darkest Peru, where through a black-and-white ethnographic-styled documentary, we learn of how an English explorer came to befriend the natives and promise them a similarly warm reception should they ever come to visit the English city.

It is with that same hope many years later that Paddington makes the transatlantic voyage after his home is decimated by an earthquake, finding himself at the titular train station after hiding in a packet of mail. There is but one key difference – rather than the hospitality he was expecting, he comes to find London “a strange, cold city” where hordes of busy people in their winter coats shuffle and jostle him by while paying him no attention. Except for the gentle and kindly Mrs Brown (Sally Hawkins), who offers to take Paddington in for the night, much to her uptight but lovable husband’s (Hugh Bonneville) chagrin, who has made it his nature to risk-analyse every single scenario for the ostensible sake of their two children, teenage daughter Judy (Madeleine Harris) and son Johnathan (Samuel Joslin).

As it turns out, Paddington’s first few minutes in the home of the Browns prove his fears right, the former’s mishap in the “facilities” on the top floor the classic stuff of Bond’s books. But Paddington needs a roof over his head as much as the Browns need a catalyst to break the monotony of their lives, and so through the joyously funny slapstick and pratfalls, one bear will melt the frost at the heart of a family while trying to track down the explorer who had brought London to Peru in the first place. Oh, and to make this adventure big enough for the multiplex, King throws in a nefarious plot for good measure, with Nicole Kidman giving a evil taxidermist named Millicent who wants to stuff the bear her best Cruella de Vil impersonation.

Indeed, it’s quite brilliant how King manages to retain so many of the distinguishing characteristics of Bond’s books by working them into the well-balanced plot while throwing in a couple of nice surprises along the way. The elderly housekeeper, for instance, gets more than a touch of ‘Mrs Doubtfire’ thanks to its star Julie Walters, who is now also a distant relative of the Browns and fills in a nice backstory to illustrate the transformative effect of parenthood on the former hippie/ rocker before he turned into the Mr Brown we are now acquainted with. The Browns’ mean and bad-tempered neighbour Mr Curry (Peter Capaldi) best known for being a penny-pincher also gets to be part of the action, seduced by Millicent into helping her kidnap the new arrival. Yes, fans of Bond’s creation will certainly love the nostalgic trappings that King lovingly preserves (and we’re not just talking about the orangey kind that Paddington loves), most prominently how Paddington comes to acquire his signature look of a duffel coat and red hat.

There is also plenty of visual spectacle for the young and young-at-heart. Paddington’s pursuit of a pickpocket provides an excuse for a wildly inventive action sequence that sees him go from skateboarding to kite-surfing. Millicent’s initial attempt to kidnap Paddington is given a touch of ‘Mission Impossible” and guileless slapstick. In between the more obvious setpieces and the action-packed climax, there are also perfectly amusing bits such as one where Mr Brown infiltrate the fictional Geographer’s Guild HQ by donning drag and fanning off the flirtations of Simon Farnaby’s sleazy security guard.

Those more acquainted with British cinema will recognise Farnaby as King’s lead in his feature filmmaking debut ‘Bunny and the Bull’, but besides Farnaby, King has assembled a veritable ensemble of British acting and comedy talent – such as “Sightseers” duo Steve Oram and Alice Lowe, Jim Broadbent as an antiques dealer and Matt Lucas as the cab driver who delivers Paddington and the Browns to their Notting Hill house. It’s a delightfully British affair from start to end, from the humour to the characters to even the depiction of London as a melting pot of cultures, where on no less than three occasions, King relies on calypso songs performed onscreen by Tobago Crusoe and his band to enliven the atmosphere.

Not that it already isn’t lively enough on its own, mind you. The pacing is more effervescent than we’ve seen in any live-action family film in a while, and the Wes Anderson-inspired art direction lends it a rare touch of elegance. What doubts there were of Whishaw’s voicing of Paddington (who replaced Colin Firth at nearly the last minute) should also be firmly put to rest, for the young(er) actor’s delivery captures the bear’s childlike yet noble character perfectly. No matter that it is arriving more than half a century since Bond’s lovingly hand-drawn picture books, this handsomely mounted, beautifully crafted and exceedingly well-made film is old-fashioned and fresh, hilarious and meaningful, and quite possibly one of the most enjoyable family romps you’ll see this year.

(Witty, inventive and bursting with charm, this live-action CG adaptation of Michael Bond’s classic literary creation is a perfect holiday film for the whole family)

THE ADVENTURES OF TINTIN: THE SECRET OF THE UNICORN (2011) 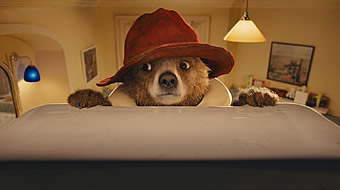