Synopsis: When legions of monstrous creatures, known as Kaiju, started rising from the sea, a war began that would take millions of lives and consume humanity's resources for years on end. To combat the giant Kaiju, a special type of weapon was devised: massive robots, called Jaegers, which are controlled simultaneously by two pilots whose minds are locked in a neural bridge. But even the Jaegers are proving nearly defenseless in the face of the relentless Kaiju. On the verge of defeat, the forces defending mankind have no choice but to turn to two unlikely heroes-a washed up former pilot (Charlie Hunnam) and an untested trainee (Rinko Kikuchi)-who are teamed to drive a legendary but seemingly obsolete Jaeger from the past. Together, they stand as mankind's last hope against the mounting apocalypse.

As far as summer blockbusters go, ‘Pacific Rim’ has probably the most unabashedly uncomplicated premise - giant robots versus giant monsters. How much you enjoy Guillermo del Toro’s robot-monster smackdown ultimately depends on whether you expect the movie to be any more than that. If you did, then you’re probably going to walk away disappointed at how simplistic this apocalyptic spectacle will turn out to be; but if you’re satisfied simply with watching huge-ass monsters and robots go up against each other, then you will enjoy every bit of this epic (and yes we do mean it literally).

Indeed, the draw of del Toro’s monster of a movie has always been to witness the monumental series of battles between massive lizard-like monsters (referred to in the movie by the Japanese word ‘Kaiju’ as a tribute to the science fiction films from the country which featured such giant beasts, e.g. Godzilla) and 25-story high robots (known as Jaegers, or ‘hunters’ in German) operated by humans. And in this regard, let us assure you that nothing in your expectation will prepare you for what del Toro has managed to accomplish onscreen -  not even comparing it to a ‘Godzilla’ meets ‘Transformers’ movie does it any justice.

Let’s start with the basics. First and foremost, the action is shot cleanly, meaning none of them shaky-cams nor extreme close-ups that diminish the scale on which it is unfolding. It is also coherent - thanks to some impressive work from del Toro regular Guillermo Navarro as cinematographer and John Gilroy and Peter Amundson as editors - rather than just a mashup of scenes that don’t flow well into one another. We’ll add one more before we start gushing - it is also beautifully choreographed, with just the right mix of medium and wide shots to place you right into the heart of the action.

If that description above seems too clinical, then how about this - these setpieces are superb; in fact, they are worthy of every superlative that you can think of. Working on a gargantuan scale, del Toro executes the action with magnificence, whether the fleeting shots of the destruction of the Golden Gate Bridge at the beginning or the more detailed sequences in the middle and at the end - in particular, a simply jaw-dropping one begins at sea just off the waters of Hong Kong and then continues seamlessly inland where both the port and the very city centre gets decimated by two Jaegers battling two Category 4 Kaijus.

It isn’t just about how colossal it gets; it is also the sheer mesmerising quality of the images, starting from the amazing level of detail of the Jaegers and the Kaijus. Even though it seems to be raining a little too conveniently every time one of these battles happens out at sea, there’s no denying just how real and majestic each of them feels. On the other hand, the cityscapes are arresting in their neon hues, and the combination of the futuristic look with which del Toro paints these familiar cities with the bioluminescent appendages and venom of the Kaijus make for a particularly appealing visual palette.

Now that we’ve finished with the savoury bits, it is only fair that we get to the (ahem) less than wieldy parts, which is in actual fact just about everything else we have yet to talk about. At first, the science-fiction mythology sounds rather intriguing - instead of coming from the skies, the threat to our planet came from a rift deep within the Pacific Ocean, a portal through which the Kaijus emerged and necessitated an equally massive response in the form of the Jaegers. Ditto the functioning of the Jaegers, which given their size, have to be operated by two pilots who sync up their minds via the neural handshake, otherwise known as the “drift”.

But del Toro and his fellow screenwriter Travis Beacham (who is also credited with this original story) uses these elements too mechanically. The rift is no more than an excuse for an underwater climax where the Jaegers aim to close the portal from which the Kaijus emerged, a resolution not quite different from that in ‘The Avengers’. More significantly, the melding of minds isn’t quite exploited for enough dramatic possibility, particularly given its significance in enabling our two lead pilots, Raleigh Becket (Charlie Hunnam) and Mori (Rinko Kikuchi) to bond so seamlessly with each other.

Equally clunky is the characterisation, which has as much poignancy as a piece of metal. Raleigh’s scarred Jaeger pilot, still reeling at first from the death of his brother Yancy (Diego Klattenhoff), heals too quickly for us to make much of an emotional connection. Mori’s own traumatic near-death experience as a child that continues to haunt her also rings hollow and is equally quickly forgotten. Idris Elba plays his Jaeger commander Stacker Pentecost in suitably macho fashion, but is largely one-note and engineered simply to deliver the rallying cries at suitable intervals - like the oft-heard “Today, we are cancelling the apocalypse” in the trailers.

Amid the self-seriousness of it all, a pair of mismatched scientists - Charlie Day looking like JJ Abrams and Burn Gorman channeling Dr Strangelove - that bicker non-stop as an attempt to inject levity are just plain irritating. Only Ron Perlman’s underworld criminal Hannibal Chau proves the more memorable supporting character - with the rest of the ensemble cast like Max Martini and Rob Kazinsky playing a father-son Aussie pilot team and Clifton Collins Jr as Stacker’s technical right-hand man essentially filling up stock types.

No thanks to the plotting and character issues, the pacing of the movie sags considerably after a prolonged prologue establishing the necessary backstory of the robots-versus-monsters war and Raleigh’s own past. It only picks up at the halfway mark when the deep-sea monsters finally clash again with their mechanical counterparts, which will either be stimulating enough (if you’re an adolescent fanboy) to make you wet your pants or leave you numb. Our opinion? It is del Toro’s most ambitious, most imaginative and probably most groundbreaking movie ever, but we wish there were more of the warmth and idiosyncrasy that have defined some of his best work.

(Every bit as jaw-droppingly awesome and exhilarating as this clash of the titan robots versus monsters promises to be, but clunky in every other aspect that’s not about spectacle) 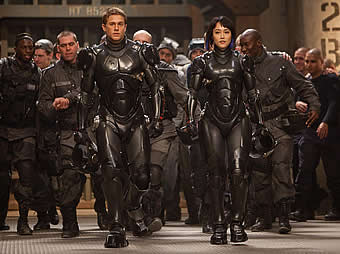 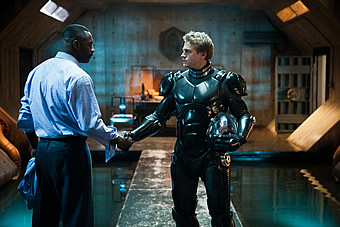 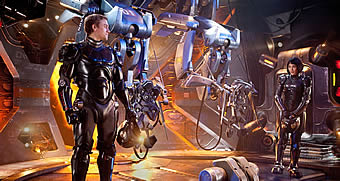 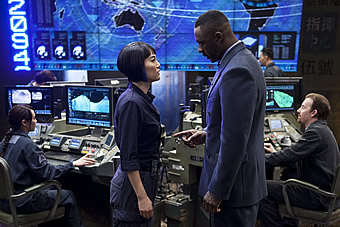 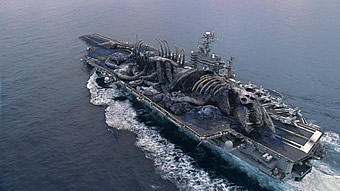