Synopsis: Manson Law (Lau Ching Wan), a celebrated stockbroker in Hong Kong is injured in a car accident. The police, led by Inspector Jack Ho (Louis Koo), discover a military surveillance device in the car wreck. Meanwhile, the wiretapper Joe (Daniel Wu) is unveiling his extensive plan that targets the mysterious financial conglomerate, the Landlord Club. The fate of these three men soon intertwines in the cat-and-mouse game that may bring down the entire stock market.

Louis Koo, Lau Ching Wan and Daniel Wu reunite with director/writer duo Alan Mak and Felix Cheong in this unrelated sequel to Overheard, the 2009 financial-theme crime boiler. While the three actors played police buddies who got embroiled in a stock exchange fiasco in the original, “Overheard 2” has Koo playing a police inspector Jack who is investigating a car crash that involves celebrity stockbroker Mason Law (Lau Ching Wan). Koo and his team found a high-tech military surveillance device in his wrecked Ferrari while at the same time, a mysterious dangerous man named Joe (Daniel Wu) might hold the answers to all these happenings.

Without giving much of the plot away, “Overheard 2” continues to revolve around the world of illegal stock fixing and we are not talking about some sleazy scumbags hidden behind monitors. The stock market if you believe is apparently influenced by a few prestige and enormously rich old men known as part of the “Landlord Club”, and well Joe’s wiretapping ways is part of a grander scheme it seems to expose their mischiefs.

After their embarrassing take on the period piece, “The Lost Bladesman”, Alan Mak and Felix Cheong is back in familiar territory. The duo famous for creating the “Infernal Affairs” trilogy developed a more constant and intense effort as compared to the first. Firstly since our three protagonists are now playing against each other, some of the heavy dialogue-laden exchanges in the original between the leads are missing here and what’s in place is a few genuinely well-executed action sequences that will keep you glue to the seat. Check out a bombing scene on a busy street and a motorbike chase to prove my point. Secondly, subplots are kept to the minimum and the script is focused tightly on the landlord club and the involvement of Jack, Manson and Joe without going to hyperdrive melodrama.

Koo in his 899th screen appearances for the year takes on a salt-and-pepper look as a cop who places justice and morality above anything else. His performance as a cop and suffering husband of Michelle Ye’s character easily stood out in the entire movie. Lau (one of my favourite HK actors of all time) who is less prolific in recent years however is being sidetracked given his character is half the time a passive dude. Wu of course is perfect as the skillful ex-military man (though never really confirm, he is mentioned using military devices and he is photographed with his mom wearing a green overall with a “Singapore” tag on it!) out for revenge. He looks great, fights well and rides a mean motorbike.

It’s not just the main cast members you will find in “Overheard 2”, apparently HK veterans such as Kenneth Tsang, his wife Chiao Chiao snagged a role too and TV familiar faces, Samuel Kwok, Lok Ying Kwan, Woo Fung and Kong Ngai appeared as members of the “Landlord Club” as well giving the movie a huge boast in casting.

So far, this year has been quite a lackluster one for HK exports where comedies generally filled up the empty slots. “Overheard 2” turns out to be a taut, intense crime thriller which Alan Mak and Felix Cheong is renowned for. These guys have proven they have matured with their filmmaking without ex-partner Andrew Lau and what a surprise, this title actually passed with flying colors surpassing the original.

(A taut and suspenseful ride surpassing the original "Overheard") 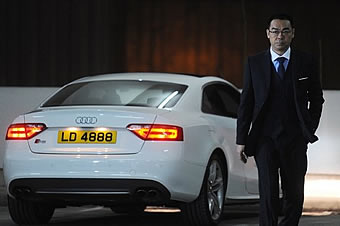 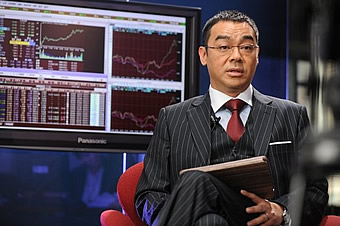 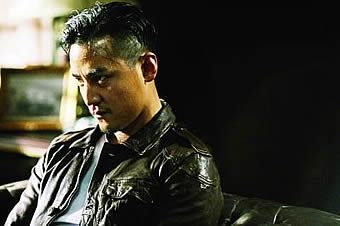 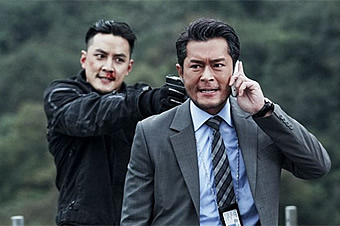