Synopsis: The Golden Triangle has become synonymous with the drug trade. Not only is it one of the largest drug manufacturing regions of the world, it is an untamed, lawless land as it sits at the intersection of Myanmar, Laos and Thailand. Two Chinese commercial vessels are ambushed while traveling down the Mekong River in the waters of the Golden Triangle. 13 sailors are executed at gunpoint, and 900,000 meth pills are recovered at the scene. This brutal massacre sets the scene for the tragedy that’s about to unfold. The Chinese government immediately reacts by sending a band of elite narcotics officers - led by Captain Gao Gang (Zhang Hanyu) - to the Golden Triangle to uncover the truth and find the mastermind behind the murders. Tea field owner and Golden Triangle-based intelligence officer Fang Xinwu (Eddie Peng) also joins the investigation, discovering that the seized drugs were planted there by the henchman of a notorious drug cartel named Naw Khar. The governments of Thailand, Laos, Myanmar and China immediately launch a joint task force to apprehend Naw Khar, but the road to justice is paved with dangerous and deadly obstacles along the way…

As well-intentioned as his inspirational youth cycling drama ‘To the Fore’ may have been, we’d much prefer Dante Lam’s character-driven yet action-packed cop dramas ‘The Stool Pigeon’, ‘Beast Stalker’ and even the under-appreciated ‘That Demon Within’. It should therefore be relief to his fans that Lam is returning to familiar territory with his latest, based upon the Chinese government’s response to the real-life incident often referred to as the ‘Mekong River Massacre’ in which a special narcotics investigation was assembled to enter the Golden Triangle (that lies between the borders of Thailand, Myanmar and Laos) to arrest the notorious drug lord Naw Khar and his compatriots responsible for the killing of 13 Chinese fishermen and crew on board two merchant vessels. And true enough, Lam does not disappoint – not only does ‘Operation Mekong’ represent his return to large-scale hyper-kinetic action cinema, it is his most ambitiously action-packed movie ever and will quite likely be one of the best action movies you’ll see this year.

True to its title, the focus is on the covert operation led by Captain Gao Gang (Zhang Hanyu), a no-nonsense hard-nosed anti-narcotics officer handpicked by the Home Affairs Minister. Except for an opening prologue that tells of the devastating impact of the drug habit in Chinese society and introduces the Golden Triangle as a key producer of the narcotics, there is no attempt at social commentary. Nor does the film try to portray the politics involved, aside from mentioning the multi-national task force that was set up among China and the three aforementioned Southeast Asian nations in the days following the massacre to conduct joint patrols of the Golden Triangle and the titular river. Whether to avoid becoming propaganda or risk becoming a flashpoint in complex geopolitics, Lam and his four co-writers steer clear of the vagaries surrounding the unilateral move by the Chinese government to sanction its officers sent under the guise of the multi-national task force to bring the criminals to face trial back in China than in any of the other countries.

Brought to the fore (pun intended) instead is the intricacies of the operation, as Gao’s elite squad teams up with locally based intelligence officer Fang Xinwu (Eddie Peng) to identify the location of Naw Khar’s base deep in the jungles of the Golden Triangle Special Region. That entails trying to rescue one of Naw Khar’s men Yan Taung Pha responsible for setting up the deal that led to the massacre, which inadvertently exposes Xinwu’s informant Gong Chai; when that fails, posing as a rich businessman looking to use Naw Khar’s drugs to complement a new casino venture; and by doing so, getting closer to Naw Khar’s inner circle, in particular his son Naw Htuu, to extract that crucial piece of information in order to apprehend Naw Khar. In between, Gao and his men will cross paths with a smarmy middleman Pierre played by Carl Ng (son of Richard and star of ‘Point of Entry’) as well as a notorious drug dealer Xing Deng wanted by the Chinese authorities from before played by veteran Hong Kong martial arts actor Ken Lo.

Each one of these three new leads is opportunity for Lam to stage a high-octane action set-piece (with impressive direction by Tung Wai) – first, a breathless foot chase through a claustrophobic market and a busy train station that turns into a jaw-dropping car chase complete with gunfights and RPGs; then, a shootout in a crowded mall which ensues in mass chaos and a tragic outcome for one of Gao’s men; and finally, the all-out assault on Naw Khar’s jungle lair that culminates in a spectacular boat chase along the Mekong River. Lam’s insistence on realism, whether in terms of sets or props, ensures that every one of these elaborate sequences looks, sounds and feels real and thrilling. Coupled with that is his flair for build-up – prior to the mall shootout for instance are gripping parallel theatres of events, one led by Gao masquerading as businessman Mr Qian meeting Naw Khar’s number-three Ya Ta and the other led by Gao’s man Wenfeng trailing the bag of money used for the exchange – which accentuates the tension and sheer white-knuckle suspense of each major sequence.

Compromised in the process is character detail or development, which frankly is somewhat of a pity. The most we learn about Gao aside from his solid leadership of his team is through a few occasional scenes where he looks at videos of his young daughter and one where he shares with Xinwu that the tolls of his job have led to his divorce years earlier. Xinwu gets a tragic backstory with Xing Deng which leads to questions about his ability to remain objective during the operation, but that little history hardly builds to anything compelling. The rest of Gao’s team are defined only by their unique skills – one’s a tech expert, one’s a linguist, another’s an excellent tracker – as well as by their Greek God-code names, e.g. Poseidon, Aphrodite, Icarus or Panoptes. There are also no shades of good and evil here, such that Gao and his men are uniformly heroes whereas Naw Phar – depicted as an over-the-top villain who snorts heroin and laughs when his child soldiers blow their own brains out playing Russian roulette – is unquestionably to be despised.

There is never any doubt that Lam has set out to make a wall-to-wall action movie, and on that count, he succeeds tremendously. Mind you, this is not some Hollywood B-movie, but one where every gunfight, car chase and explosion is choreographed with panache, adding up beautifully to a single movie that has nary a dull moment. Unlike his peers who have taken on similar subjects (such as Johnnie To in ‘Drug War’ or Derek Yee in ‘Protégé’), Lam isn’t taken so much by the fallouts of the drug business or its victims – notwithstanding the brief nod to the limbless villagers punished for disobeying Naw Khar’s orders – as he is on the complexities and minutiae of the clandestine operation that helped bring to justice one of the biggest criminal kingpins in the Golden Triangle. If you accept ‘Operation Mekong’ on its terms, you’ll find this one of the most exhilarating movies of the year, an accomplishment which cements Lam’s reputation as the foremost Hong Kong director for big-scale action cinema.

(Easily one of the most exhilarating movies of the year, ‘Operation Mekong’ boasts spectacularly real and thrilling action set-pieces that represents some of its director Dante Lam’s finest work) 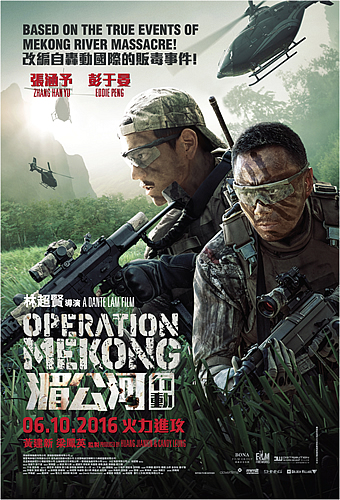