Synopsis: In the early 20th century, labourers from all over the country were rushing to the flourishing city of Shanghai. Ma Yongzhen (Philip Ng), a youthful man from Shangdong, arrived at this prosperous city working as a dock labourer. He moves to Shanghai in the hope of becoming rich. But ends up using his kung fu skills to survive and against the evil Japanese.

At a time when the hopes and dreams of every martial arts movie junkie seem to rise and fall with the coming and going of a Donnie Yen film, the pedigree behind ‘Once Upon A Time in Shanghai’ reads like a wish come true. Leading the cast is the Wing Chun practitioner cum action choreographer Philip Ng, the wushu and Jackie Chan Stunt Team-trained Andy On and last but not least the no-need-for-further-introduction Sammo Hung; but perhaps even more astounding is that the action is directed by none other than Yuen Woo-Ping, who is undoubtedly a legend in his own right.

And indeed, the fight scenes are nothing short of impressive. Together with veteran action star cum choreographer Yuen Chung Yan, Yuen Woo Ping demonstrates why he is the grandmaster (pun intended) of martial arts direction. Every scene exhibits a spontaneous fluidity, one move leading to another ever so effortlessly and gracefully, and the result is balletic and beautiful in its own right. It certainly helps that the Yuens are working with real-life martial artists; despite weeks and even (in the case of Tony Leung) months of training, there is nothing quite like seeing true blue actors trained and raised on martial arts going at each other and complementing each other’s styles at the same time.

Intended as a showcase for the Hong Kong-born, American-raised Ng, the multi-talented 28-year-old doesn’t disappoint in the action department. The film opens with him standing up for a little girl against a group of bullies en route to Shanghai, and right from the start, Ng recalls the form, physique and intensity of Bruce Lee. He gets his first real opponent to speak of in his duel with Andy On, the ferocity and swiftness of their mutually matched blows astounding to watch. And then there is of course the extended climax, in which he takes on a trio of venerable martial arts actors including his choreographer Chung Yan, Chen Kuan-Tai and Fung Hak-On, before moving on to a younger and equally well-matched adversary in budding Mainland actor and wushu-trained Mao Jun Jie.

Those looking for Ng to have a showdown with Sammo Hung however will have to wait for another movie - both of them are cast as the good guys, with Hung playing the village head of that which Ng becomes a part of and whose younger daughter he eventually falls in love with. We might as well caution you too that Hung doesn’t show off much of his prowess here; in fact, while he may receive equal billing with Ng and On, he is pretty much a second-degree supporting act, that ‘alliance of kung fu masters’ between Hung and Yuen Woo-Ping that the poster speaks of quite misleading in our opinion. But even with that notable omission, the action here is among some of the best we have seen in recent years in a period martial arts movie, and more than lives up to the hype that fans must have had since the announcement of the collaboration between Ng and Yuen one and a half years ago.

Next to the fighting, the rest of the movie plays like a companion piece to scriptwriter and producer Wong Jing’s ‘The Last Tycoon’. Like the latter, this one is also set in Shanghai in the 1920s and 30s, the ‘City of Dreams’ which attracted many from other provinces in China seeking fortune and fame. Like the latter too, there is an underworld element to the story, this time in the form of Andy On’s Long Qi (or literally ‘Dragon Seven’ in Mandarin). And finally, like the latter, there is a strong whiff of patriotism, as Ng’s labourer Ma Yongzhen and Long Qi join forces to defeat the Japanese spies infiltrating the city with an insidious agenda to take over it. Jing’s script may not be compelling, but it provides an engaging enough narrative glue to hold the action scenes together.

Amidst it all, it is perhaps easy to forget that there is a young director Wong Ching-Po at the helm. A rather unlikely choice given his filmography, Wong’s contributions here are evident in the surprisingly artful touches the film boasts. You have to credit Wong not only for giving the movie a classy feel, but also for reining in the possible excesses of Wong Jing’s script - after all, a similar clichéd love story spun between Ng and Jiang Lu Xia as well as On and nightclub singer Michelle Hu Ran avoids the melodrama of ‘The Last Tycoon’ no doubt because of Wong’s restraint.

Yes, this is probably one of the rare martial arts films that you can call elegant, and we’re not talking about the action choreography. But of course, the attention here is on the up-and-rising star Philip Ng, his magnetic and perhaps even more charismatic co-star Andy On, as well as the esteemed Yuen Woo-Ping. If it isn’t obvious enough, the fights are nothing less than thrilling, building up to an exhilarating finale that you’ll want to watch and savour more than once. As a remake of the 1972 film ‘The Boxer from Shantung’ in which Chen Kuan-tai played the titular character, it is also a splendid throwback to the old-school action movies which the Hong Kong film industry was founded on. But even if that little nugget doesn’t tickle your fancy, you’ll still find this a fine period action movie that more than lives up to its pedigree. 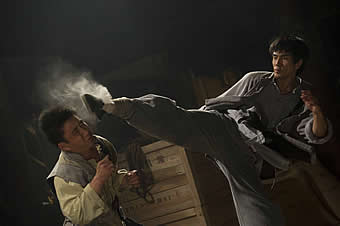 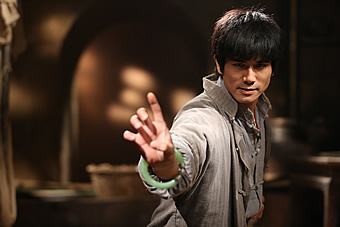