Synopsis: A chaotic love story of a man and a girl who keep falling for each other in the wrong place at the wrong time over and over as if God enjoys playing tricks on them and won’t easily give them a break to be together.

At first glance, ‘OMG! Oh My Girl’ is yet another story about a boy and a girl who spend an entire movie struggling to get together. Said boy and girl is Guy (Wongravee Nateetorn, also known as ‘Sky’) and June (Plearnpichaya Komalarajun, also known as ‘June’) respectively, who start off as high-school acquaintances that share a serendipitous meet-cute over a $1,000 note one day. Despite only a brief conversation there and then over how to split the note, Guy and June gradually hit it off as good friends, although it doesn’t take a genius to tell you that their relationship isn’t quite just platonic.

Guy realises he has feelings for June when one of his best friends Phing successfully wins her attention using his lame trick of going right up to her and texting her ‘I like you’. Alas, even though Phing and June quarrel much and break up every now and then, Guy cannot quite find the right opportunity to profess his love for June. That is despite a couple of further meet-cutes, including an encounter with a cockroach in front of a stationery store and an evening walk through knee-deep waters that will see June retrieve a slipper in place of Guy’s missing shoe.

By the halfway mark when Guy and June both graduate from high school, June would in fact have hooked up with guitarist Pete (Pachara Chirathivat, also known as ‘Peach’), after making each other’s acquaintance that very night Guy and June had their aforementioned evening walk. Though he tries to move on by dating a work colleague followed by a talent acting in one of his production company’s videos, Guy cannot quite put June down, not least when he has an unexpected run-in with her one day and is drawn back into their high school social circles.

Director and co-writer Pong Thitipong Kerdtongtawee keeps the proceedings droll and breezy for most of the first two acts, with tongue-in-cheek voiceovers, fourth-wall breaks and even the best use of a fart joke we’ve heard in a while. Pong also lets the gentle, unaffected chemistry between ‘Sky’ and ‘June’ grow and blossom over the course of the film, especially in their quieter, one-on-one scenes together, so that you’ll slowly but surely root for Guy and June to get together by the end of it. The supporting acts also deserve due credit, including Guy’s three sisters and the unlikely couple of Guy’s goofy best friend Tah and June’s icy roommate Lex.

But ‘OMG! Oh My Girl’ truly comes into its own in the last act, where Guy has to decide whether to make a last-ditch attempt to win June’s heart following Pete’s marriage proposal. Than take the easy way out, the movie examines the sometimes painful consequences of following through on feelings, as true and genuine as they may be; in particular, it is noble that the film makes a deliberate decision not to cast Pete as a jerk, casting him instead as a perfectly nice guy who is sincerely in love with June.

Should Guy come clean on how he feels towards June, knowing fair well that he could break up a happy couple? Should June now be honest about her feelings about Pete, knowing fair well that doing so would break Pete’s heart? Indeed, it is in this last act that the film boldly examines the complications of how love could lead to hurt and heartbreak. It is also wise enough not to spell out what to take away from the chain of events, recognising that its viewers will likely form our own judgments of Guy and June’s choices based on our own experiences and even principles.

So even though it starts out like any other teenage/ young-adult rom-com, ‘OMG! Oh My Girl’ has surprising layers of depth and nuance, offering food for thought for anyone reminiscing about the one who got away. Pong has good instincts about tone and balance, such that even when things get real especially in the last act, the film never gets overly maudlin or melodramatic. There is ultimately a lesson here about the importance of serendipity, or the lack thereof, in how love with the right person at the wrong time could have its own unintended repercussions. Go in with an open mind and an open heart, and let yourself be won over by its honest study of love, life and longing..

(An amusing, affecting, and surprisingly insightful exploration of how love needs serendipity, without which the right person at the wrong time would end up with its own unintended repercussions) 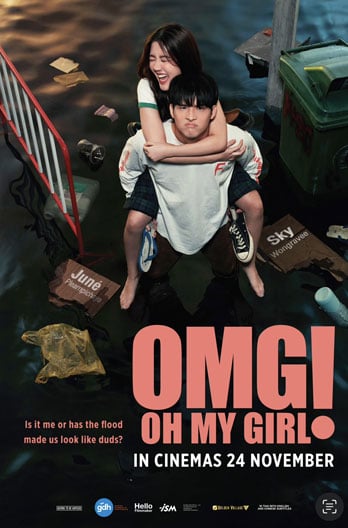