Synopsis:  Billion-dollar company Jones & Sunn is going public. Chairman Ho Chung-ping (Chow Yun Fat) has promised CEO Chang(Sylvia Chang), who has been his mistress for more than twenty years, to become a major shareholder of the company. As the IPO team enters the company to audit its accounts, a series of inside stories start to be revealed. Lee Xiang(Wang Ziyi), a new hire at Jones & Sunn, brings with him youthful ideals and dreams. Within the neoliberal market, the logic of intrigue rules, complicated by entanglements of love-hate relationships, which weaves a power play and a pathos-laden tragedy inside the office.

At a ripe old age of 60, Hong Kong’s gangster noir master Johnnie To seems to have mellowed. In place of hard-boiled male-driven films like ‘The Mission’, ‘Election’ and ‘Exiled’, To has preached about the corruptibility of money in ‘Life Without Principle’, broken his cardinal rule against sequels in favour of a sappy slapstick rom-com in ‘Don’t Go Breaking My Heart 2’, and is now doing a full-fledged musical about corporate politics. ‘Office’, adapted by Sylvia Chang from her own hit play ‘Design for Living’, is probably the most uncharacteristic Johnnie To film we have seen to date, though it is also hardly one of his best, be it from a critical or commercial standpoint.

As with her play, Chang stars as the high-powered CEO named Winnie of the lucrative company Jones & Sunn that is about to launch its IPO. Established early in the narrative is that Winnie used to be the Chairman’s secretary, and that their relationship goes beyond that of a mentor and a mentee. Indeed, it is an open secret among the company’s rank and file employees that Winnie is Chairman Ho Chung-ping’s (Chow Yun Fat) lover, and it is also hinted later on that his comatose wife (Mimi Kung) whom he visits regularly in hospital with a bouquet of flowers has never quite gotten over his affair. On the other hand, his bright Harvard-graduate daughter Kat (Long Yueting) has just joined the company as an ordinary employee, in order to give her an opportunity to prove her worth to her fellow colleagues.

Though Winnie was a pivotal lead character in the stage version, Chang’s screenplay instead cedes more time to three other characters – her vice CEO David Wang (Eason Chan), a bold but impetuous go-getter who has been using the company’s money to dabble in stocks; the company’s financial controller Sophie (Tang Wei), who has just been dumped by her fiancé back in China because she keeps putting off their marriage in fear that it would affect her career progression; and last but not least, Li Xiang (Wang Liyi), an eager bright-eyed new employee whom Winnie favours to David’s resentment and who has a thing for the Chairman’s daughter Kat. Their collective fates unfold against the backdrop of the looming Lehman crisis in 2008, with profound ramifications on both the company and its employees.

Commendable though it may be for Chang to reduce her role in order to give voice to the other characters occupying different strata of the company hierarchy, the absence of a lead character unfortunately makes for several under-developed subplots that don’t quite flow or blend into each other. David comes off as the most fully formed character of the lot, but his tryst with Winnie and subsequent manipulation of Sophie in the midst of her emotional meltdown lacks credibility. Ditto for Li Xiang’s attraction towards Kat, which isn’t given a raison d'être beyond love at first sight. But most lamentable is the relationship between Chung-ping and Winnie, which has been condensed into a handful of scenes with both exchanging knowing looks at each other during some corporate event or with Winnie staring wistfully at pictures of Chung-ping on her desktop.

Without enough time to properly develop these intricate workplace relationships, To struggles to find the right tone for his blend of office drama and satire. On one hand, the musical numbers strike a comic note on the grind of the everyday work life; on the other, the rest of the film want to portray in all seriousness the different corporate archetypes, whether the over-achieving newcomer, the brash yet insecure senior management executive, or the shrewd but Machiavellian head honcho. That uneasy balance falls apart in the third act as To tries to build towards a finale that is meant to bring both reckoning and closure for the characters, what dramatic resonance in the proceedings sadly undercut by the frivolity of some musical numbers that seem awkwardly inserted to lighten the mood.

These flaws however do not diminish the film’s technical accomplishments, of which there are many. For one, the US$6.3 million set designed by William Chang on which the whole film was filmed is impressive to say the very least, especially the open-concept office space comprising one floor of orderly rows of tables and chairs and two converging staircases leading to the upper floor where the CEO’s office is. Much thought has also been put into the visual design, which aims for a clean-cut minimalist look that either does away with opaque walls altogether or makes them transparent. In that respect, the staging (pardon the pun) feels almost as if we were watching actors on a stage, performing in a series of interconnected cells defined by thin metal bars and brightly lit florescent tubes.

That’s not to say To’s direction has been similarly constrained. Aided by his veteran cinematographer/ collaborator Cheung Siu Keung, To’s cinematic flair remains undiminished despite the theatrical nature of the sets, most significantly in a number of tracking shots both within and outside the confines of the office building. To also gets the best out of his actors, including a nuanced performance from Chan who goes from self-confident to insecure to plain desperate and whose duet with Tang Wei is probably the most memorable number. Speaking of singing, the ensemble pieces are probably better choreographed than sung, especially since To’s supporting regulars like Eddie Cheung and Stephanie Che are better actors than singers. And though Chow doesn’t sing a single note, it is a delight to see him and Chang on screen together more than two decades after ‘All About Ah Long’, their chemistry evident even in the few scenes they share.

As unique as ‘Office’ may be amidst To’s oeuvre, it will likely not be remembered among one of his best. That has largely to do with Chang’s script, which tries to balance too many characters at the same time and ends up being unwieldy in the process. It also lacks the clarity of purpose and voice as his best films, unable to decide if it wants its audience to take away a serious moral message like ‘Life Without Principle’ or simply be entertained like ‘Don’t Go Breaking My Heart 2’. It ends up doing neither well, and instead coming off better as a technically accomplished exercise full of style but somewhat lacking in substance. Oh yes, it is pretty to look at, but it is ultimately also pretty empty inside.

(A clear example of style over substance, Johnnie To’s musical-drama is visually impressive but narratively empty) 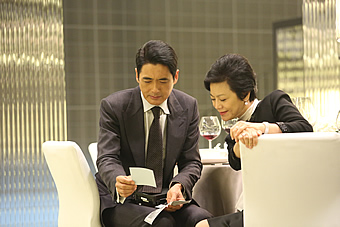 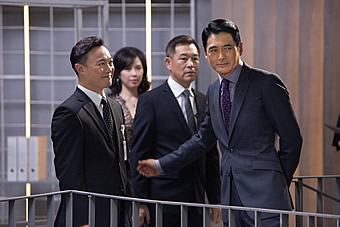 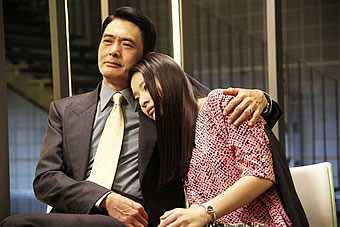 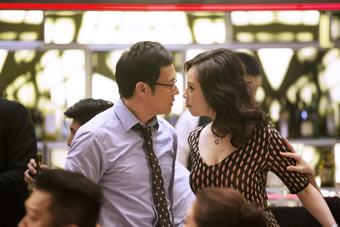