Synopsis: NIGHTCRAWLER is a thriller set in the nocturnal underbelly of contemporary Los Angeles. Jake Gyllenhaal stars as Lou Bloom, a driven young man desperate for work who discovers the high-speed world of L.A. crime journalism. Finding a group of freelance camera crews who film crashes, fires, murder and other mayhem, Lou muscles into the cut-throat, dangerous realm of nightcrawling – where each police siren wail equals a possible windfall and victims are converted into dollars and cents. Aided by Rene Russo as Nina, a veteran of the blood-sport that is local TV news, Lou blurs the line between observer and participant to become the star of his own story.

If there is one actor we want to see nominated at next year’s Academy Awards, it is Jake Gyllenhaal. Since ‘Donnie Darko’, the actor has made a career out of portraying obsessive, eccentric characters with a maniacal edge, and there is no doubt watching him as the sociopathic freelance TV news cameraman Lou Bloom that Gyllenhaal has reached the very peak of his craft. Recalling Robert De Niro’s Travis Bickle, Gyllenhaal is simply mesmerising to watch in a performance equal parts intense and unsettling, even more so given his physical transformation for the role that is borne out in his alarmingly gaunt, wild-eyed look.

There is a restlessness that one can sense from Gyllenhaal just by paying attention to his eyes, which is exactly the spirit of veteran writer Dan Gilroy’s directorial debut. Indeed, ‘Nightcrawler’ shares a lineage with Martin Scorcese’s ‘Taxi Driver’ in its character-driven portrayal of a disturbed, isolated individual who roams the streets of the city at night in search of purpose. Like Travis, Lou is caught up in his own self-delusional ambition and regard, as evidenced from the misplaced sense of self-confidence he exhibits while asking for a job from the owner of the scrap yard to whom he is selling illegal metal obtained from cutting wire fences – “I’m not hiring a f**king thief,” says the guy.

But the low-life lying petty criminal we first know Lou as finds purpose when he chances upon a fiery car crash one night and runs into cameraman Joe Loder (an excellent Bill Paxton) for the aptly named production house Mayhem Video. Joe explains how his business works: he and his partner are among a fiercely competitive group of freelance videographers who prowl the streets of Los Angeles for any and every incident that they can film and sell to ever-hungry local TV stations. So goes the dictum “if it bleeds, it leads”, and these opportunists go exactly for what would yield the most mayhem and malfeasance that they know the stations would bid for in order to claim an “exclusive” to draw in the ratings.

Lou is instantly entranced, and goes about setting up his business by acquiring a camcorder and a police scanner, as well as a hiring an intern, a down-and-out guy named Rick (Riz Ahmed) who would ask little when told by Lou to do his bidding. From a dying carjack victim to a cyclist killed by a drunk driver to gunshots in a quiet neighbourhood, Lou shows no qualms poking his camera right into the faces of his subjects. His in-your-face footage is exactly what the equally hungry Nina (Rene Russo) is looking for; the news director at a low-rated TV station, the sensational videos he brings her not only boosts her station’s ratings, but also more importantly her career.

“Think of our newscast,” Nina tells Lou, “as a screaming woman running down the street with her throat cut.” And Lou takes his “job” deadly seriously, changing up from a blue Toyota Tercel to a fire-red Dodge Challenger so he can outrun his competition and investing in higher quality cameras and scanners for the same intent. To up himself to the next level, Lou goes from just filming a scene to positioning his subjects in order to get a better shot and finally to trespassing the scene of a home invasion/ triple homicide. Mind you, this is a character with no moral centre and no capacity for empathy, and Gyllenhaal doesn’t make him any more savoury.

It is admittedly a daring choice for a character study, particularly because right up till the end, Gilroy doesn’t present any redeeming quality about Lou to make him any more likeable or, for that matter, to explain just why he turned out this way. Instead, he digs into his character’s psychopathy, creating a personality that is compelling and repelling at the same time, but one that is absolutely fascinating in his utter lack of compassion or self-awareness. Most notably, Gilroy sets up an electrifying dynamic between Lou and Nina, as the former reveals himself to be even more manipulative than his older wile when he proposes to take their vendor-client relationship to the next level over dinner. Despite the age differences, Russo (or Gilroy’s wife in real life) is a shrewd complement for Gyllenhaal, the pair generating some erotic tension despite the obvious age differences which the latter’s character gladly acknowledges.

Gilroy’s movie also works on other levels, most prominently as a damning critique on the sensationalistic appetite of today’s news media outlets. Comparisons will no doubt be made with the classic Hollywood film to delve into the subject, i.e. ‘Network’, but much as he takes a satirical approach with how Lou talks about growing his ‘Video Production News’ business in terms of projected growth curves, Gilroy intends for his film to be a searing indictment of contemporary journalism, where ethics are so easily shoved aside in the pursuit of numbers. And thanks to Robert Elswit’s sleek visuals, it also inherits the DNA of Michael Mann’s ‘Collateral’, where the mixture of film (in the day) and digital (at night) lends the lonely canyon roads and shadowy corners of the real Los Angeles an ethereally edgy feel.

Besides Elswit, (Dan) Gilroy gets good help from his family – his twin brother, John, is the editor; while his older brother, Tony (of ‘Michael Clayton’ and ‘The Bourne Legacy’) is a producer – for a gripping film that delivers as a character study, a psychological thriller and a damning critique of the consequences of the 24-hour TV news business. But ‘Nightcrawler’ works so beautifully precisely because of Gyllenhaal’s performance; it is on his shoulders that the entire film rests, and Gyllenhaal delivers with extraordinary conviction. 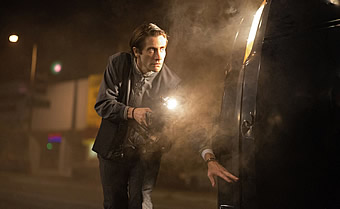