Synopsis: For decades, all forces in the martial world had been fighting for two legendary weapons, the Dragon Saber and the Heavenly Sword. Xie Xun, the “Golden Lion King” of the Ming Sect, had made countless enemies in seizing the Dragon Saber. His god-brother Cuishan (Louis Koo) was coerced by the Six Major Sects to expose Xie Xun's location and ends up dying under Emei Sect Master No-mercy’s Heavenly Sword…

Anyone who knows Wong Jing will know that the quality of his works varies wildly; that said, the 1993 martial arts epic ‘Kung Fu Cult Master’ starring Jet Li, Sharla Cheung, Gigi Lai and Chingmy Yau is one of his better regarded works, even though his decision to turn the righteous Zhang Wuji into an smug hypocrite probably did its box office performance in. Whether to seek vindication or otherwise, ‘New Kung Fu Cult Master’ sees Wong Jing remake his earlier movie, and at least in the first parter, make amends for his previous narrative choices which fans of the classic Louis Cha novel vehemently disliked.

Like the original, this remake opens with a prologue detailing the enmity between the Six Major Sects (comprising Shaolin, Wudang, Emei, Kunlun, Kongtong and Mount Hua) and Xie Xun (or Golden Lion King of the Ming Sect), which results in the latter’s sworn brother Zhang Cuishan (Louis Koo) fleeing to seclusion with his wife Yin Susu (Rebecca Zhu) and their son Wuji. Years later, the family make an ill-fated return to Wudang to visit Cuishan’s master Zhang Sanfeng (Donnie Yen), as they are confronted with the Six Major Sects demanding that Cuishan reveal Xie Xun’s location and hand over Susu. By the end of that fateful evening, Cuishan would have sacrificed himself to save Susu and Wuji, while both Susu and Wuji would have been heavily wounded by the Xuanming duo through their ‘Xuanming Divine Palm’.

So that audiences won’t feel deceived by the top billing of Yen and Koo, Wong Jing devotes close to half an hour just detailing the aforementioned back-story, with Wuji eventually returning to the Ice Fire island with Susu to learn the legendary Great Yang stance. Wuji returns to the Central Plains to avenge his parents as a young adult (Raymond Lam), where he encounters the feisty Xiao Zhao (Yun Qianqian) from the Ming Sect and stumbles upon a dastardly plot by Princess Zhao Min (Janice Man) to sow discord between the Six Major Sects and the Ming Sect in order to stir up a deadly battle and eliminate them once and for all.

Spanning close to two hours, the plotting is dense yet engaging, delineating the ascent of Wuji to the throne of the 34th Chief of the Ming Sect, the downfall of each of the Six Major Sects at the hands of Princess Zhao and her henchmen, and the climactic fight involving the fabled Dragon Saber and Heavenly Sword. Despite this being a remake, those who remember the 1993 original will be pleasantly surprised at how Wong Jing reinvents his earlier adaptation to retain certain familiar elements (such as how Princess Zhao poisons the elders of the Ming Sect, or how Xiao Zhao steps in to buy time when Emei Sect leader Meijue shows up) while changing up other details to keep things fresh and interesting (like how Wuji confronts not the Xuanming elders but a pair of Zhao Min’s right hand men called Ah Cat and Ah Dog at the end).

Sharing directorial duties with his cinematographer Keung Kwok-man, Wong Jing displays a far greater attention to detail here than in his usual solo works. Instead of rushing through the twists and turns, Wong Jing lets each scene build up nicely, giving the various characters space to work through the scene, and letting one scene flow coherently to the next with proper continuity. In the meantime, Wong Jing also tones down his typical excesses, and while there are occasional indulgences (such as how Xiao Zhao throws herself at Wuji), the tone is otherwise perfectly balanced between drama, romance and comedy.

This is also credit to the stellar ensemble which Wong Jing has assembled for this production. Despite his age relative to others who have played the role, Lam redeems himself suitably as Wuji, bringing a heretofore unseen maturity and thoughtfulness to the character. Man, Sabrina Qiu (as Zhiruo of Emei Sect) and Yun cannot quite match up to their predecessors Cheung, Lai and Yau respectively, but at least are never ingratiating. On the other hand, it is a joy seeing veterans Jade Leung (as Miejue), Alex Fong (as Left Emissary Yang Xiao), Felix Lok (as Eagle King) and Raymond Wong (as Bat King) spar with one another; ditto for extended cameos by such eminent martial arts actors as Shi Yanneng (as Cheng Kun), Louis Fan (as Ah Dog) and Yen, who is a worthy successor to Sammo Hung as a more pensive Sanfeng.

Quite frankly, we had not much hope for ‘New Kung Fu Cult Master I’, partly because the trailers do not do justice to the thought and effort put into the production and partly because (well) it is Wong Jing after all. Yet we were more than surprised at how engrossing and exciting it turned out to be, an evidently significant step-up from the earlier 1993 cult classic. It comes as no surprise that it ends on a cliffhanger (with Wuji promising a fleeing Princess Zhao that he will follow her to Dadu to rescue the members of the six sects she had kidnapped); and thankfully, unlike the sequel to the 1993 original that never happened, we will get to see the concluding next chapter that we are left eagerly awaiting for.

(Aided by a stellar ensemble, including a solid Raymond Lam as Zhang Wuji, this engrossing, exciting and utterly enjoyable remake of his 1993 cult classic sees Wong Jing at his filmmaking best) 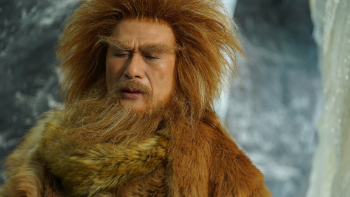