Synopsis: Returning stars Seth Rogen, Zac Efron and Rose Byrne are joined by Chloë Grace Moretz for Neighbors 2: Sorority Rising, the follow-up to 2014’s most popular original comedy. Nicholas Stoller again directs in a film that follows what happens when the will of parenthood goes against the bonds of sisterhood. Now that Mac (Rogen) and Kelly Radner (Byrne) have a second baby on the way, they are ready to make the final move into adulthood: the suburbs. But just as they thought they’d reclaimed the neighborhood and were safe to sell, they learn that the new occupants next door are a sorority even more out of control than Teddy (Efron) and his brothers ever dreamed of being.

Sequels often seem too eager to reprise the (winning) formula of their predecessor, without realising that the same jokes ain’t quite so funny the second time around; and yet those who try to reinvent the wheel also risk falling out of favour with fans of the original, who are ultimately expect a fresh, yet familiar, helping of the same. Accomplishing that balance isn’t quite so easy, which is just one reason why ‘Neighbours 2’ is a surprising achievement. While reprising the template of the original in having middle-aged Seth Rogen and Rose Bryne’s homeowners/ newfound parents take on loud, obnoxious teenagers right next door, this sequel that manages to be just as, if not more, raucous and outrageous is even funnier, more poignant and we dare say, even better than the original.

Instead of Zac Efron’s perfectly ripped Teddy Sanders and his other Delta Psi frat-boys, Mac (Rogen) and Kelly (Bryne) find themselves up against a sorority led by Shelby (Chloe Grace Moretz) and her similarly non-conformist new friends Beth (Kiersey Clemons) and Nora (Beanie Feldstein). Irked by the rule that sororities on campus are not allowed to host parties and appalled by the ‘rape culture’ at misogynistic frat parties, Shelby decides to search for a house outside of the university grounds to start a new sorority she eventually names ‘Kappa Nu’, a search that brings her to the very house where Delta Psi used to reside. Their timing however couldn’t be more unfortunate – in anticipation of their second child, Mac and Kelly have just sold their house to a mixed-race couple, who have a 30-day escrow period to make sure the place is in order before confirming their purchase.

Shelby finds an unexpected ally in Teddy, whom we learn has been struggling to adjust to life after college. Not only does he find that his abs have become no longer relevant at  Abercrombie & Fitch where he works, his best friend and roommate Pete (Dave Franco) wants him to move out after coming out of the closet by announcing that he is about to get married to a man. Teddy’s still sore about the previous confrontation with Mac and Kelly – not least because it left him with a criminal record that has made it difficult for him to find employment – and finds purpose assisting Shelby work out the sums to pay rent by showing them how to run a party to also attract more like-minded females to join Kappa Nu. It is also Teddy who coaxes Shelby not to acquiesce to a 30-day truce which Mac proposes.

And so just like that, the battle lines have been drawn between the two houses yet again, though Teddy will switch sides halfway when the Kappa Nus hold an executive meeting over Instant Messaging (IM) and oust him for being “an old person”. Somewhat surprisingly, the gags you probably already know about – including that of the Kappa Nus dressed in bikinis throwing themselves on top of Mac’s car – are as brief as they have been glimpsed in the trailers. Indeed, there is more up the sleeves of returning director Nicholas Stoller and his team of screenwriters (including original scribes Andrew Jay Cohen and Brendan O'Brien, and Rogen and Evan Goldberg) than you would expect, ranging from a marijuana heist at a tailgate party to an iPhone sabotage that leads to a series of misplaced texts and false alarms.

Just as amusing as these high-farce set pieces are the high-profile cameos by Lisa Kudrow and Kelsey Grammar, the former as a hard-assed college principal whom Kelly makes the mistake of trying to bribe with a couple of dollars and coins and the latter as Shelby’s dad whom Mac and Kelly call in to rein in his ‘wayward’ daughter. That ‘Neighbours 2’ turns out more engaging than the sum of these parts is credit to the attention and detail that Stoller pays to each one of the key characters – namely, Mac, Kelly, Teddy and Shelby – none of whom he conveniently fits into the mould of hero or villain. In fact, you’ll be pleasantly amazed at how your sympathies shift during the course of the movie, so much so that you’d wish that they could all just put aside their differences and get along with each other at the end of the day.

Amidst the laughs, there is also a thoughtful and sometimes thought-provoking lesson on sexism. On the surface, the very establishment of Kappa Nu seems like a modern-day feminist movement, its genesis rooted in the rebellion against the archaic rules of the Greek system that persist till today. And yet, along the way, Stoller and his eminently male screenwriting team call out the hypocritical pitfalls of such empowerments, especially as Kudrow’s college dean points out to Mac that ‘there is no such thing as reverse sexism’. The subtext here is a little less straightforward, but those looking for a more forthright comedy of low-brow pleasure will find much to laugh and holler at in this authentically ribald sequel. Oh yes, fans of the original will be glad to know that even though the gender is different, the gross-out sensibilities remain intact, and this is as perfect a sequel as you would expect.

(As gross and low-brow as its predecessor, this sequel tops the original with better character work and a surprisingly pointed message on female empowerment) 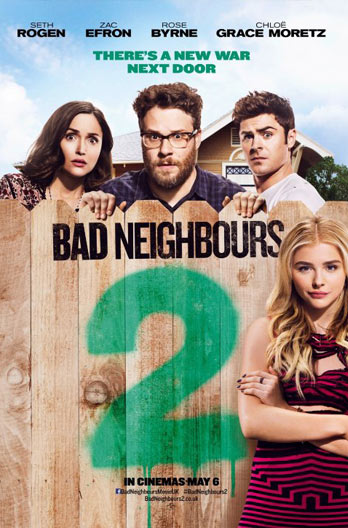