Synopsis: A sequel to the 2001 movie "My Sassy Girl" - Gyun-woo can't forget the sassy girl. One day he meets the love of his life again and marries her. However, he goes through a honeymoon which no man would ever dream of.

My New Sassy Girl (2015) is one which prides itself as the sequel to the immensely successful movie My Sassy Girl (2001). It stars the same male lead, Cha Tae-hyun as Gyun-woo. Playing the role of the new sassy girl is Victoria, member of Korean girl group f(x). Borrowing the fame and success of ‘My Sassy Girl’, My New Sassy Girl had a promising start but certainly did not live up to the standards of its predecessor.

Gyun-woo reunites with his childhood sweetheart in an unexpected encounter and they quickly got married as she came back to fulfil the promise she made to him when they were young. Determined to win the girl of his heart, Gyun-woo changes his outlook on life and goes through transformation to woo her. Even after successfully going through the trials to get married, they still needed to work out many differences. Could love eventually win?

The narrative of the movie is one that is rather predictable and lacks depth. The development of the story was hasty, and it did not help that the onscreen chemistry between Tae-hyun and Victoria is nearly zero. Albeit Gyun-woo still aced as the comedic, happy-to-go guy. But because of the shallow plot, even the element of ‘romantic-comedy’ was also absent.

The supporting roles also didn’t help to beef up the plot. Although each of the side characters had distinct personalities, they did not have a crucial part to play with regards to the storyline. They were there pretty much for ‘decorative’ purposes, especially true in the case of Mina Fujii, who played the role of a Japanese co-worker.

Perhaps the only interesting part of the movie was seeing how the Chinese and Korean cultures are cleverly mixed. From the exchange of calligraphy and idioms between the sassy girl and her mother-in-law to extending the filming location to scenic places in China, the cultural flavors mixed into the movie did up the entertainment value by a bit.

If you had pinned some hopes of getting a good laugh out of this rom-com, you might be in for disappointments. My New Sassy Girl probably did not outdo its predecessor with the cheesy lines and unexciting plot. Even the element of ‘sassy’ was largely missing in this one. 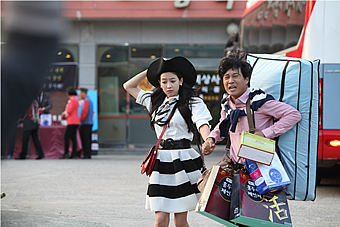