Synopsis: Set in the 1950s, My Love Sinema details one man’s never-ending pursuit of his passion for movies and films. It tells the story of Kheong (Tosh Zhang), a young, starry-eyed 20-year-old who moves to Singapore from a kampung in Malaysia, to train as a film projectionist. There, he meets Lee (Jeff Wang), who becomes his mentor and teaches him about life, girls and dancing. At the cinema, Kheong also encounters Wei (Cheryl Wee), a young Chinese teacher who finds herself torn between her obligation as a dutiful daughter and her feelings towards Kheong. As their affection towards each other grows, they face various obstacles that prevent them from being together. A riveting story of courage and hope, this nostalgic film chronicles life’s triumphs and disappointments and inspiring audiences to stay true to their passions.

Mostly, it is either filmmakers or film aficionados who look back with dewy eyes on the era of film – as opposed to digital – which makes ‘My Love Sinema’ a hard sell based on the former alone. Oh yes, writer-director Tan Ai Leng’s feature filmmaking debut brims with unabashed love for the by-now (at least in Singapore) by-gone method of cinematic projection, channeled through the enthusiasm of its 20-year-old protagonist Chan Chee Kheong (Tosh Zhang) learning the trade of a film projectionist in the 1950s. In those days, not only did projectionists have to learn to splice separate boxes of film reels together to make one complete feature film screening, they also had to learn to repair them if they were broken, especially after repeated screenings. It is these skills that Ah Kheong pleads Brother Lee (Jeff Wang) to teach him, readily agreeing to buy the latter a gramophone so that Lee will agree to be his ‘shee fu’ (aka master).

Yet, like we said at the beginning, such nostalgia isn’t quite so widely shared with the general public, given how digital projection has delivered cleaner images and crystal-clear sound for what many would say is an overall improved cinematic viewing experience. So, with some influence from her local filmmaking background in ‘That Girl in Pinafore’ (where she was first assistant director) as well as recent period-set box-office hits like ‘You Are the Apple of My Eye’ and ‘Our Times’, Tan has wrapped her love for film around a romance involving Ah Kheong and a sweet young girl named Ho Xiaowei (Cheryl Wee). And because it would be too straightforward to have them simply fall in love and live happily-ever-after, Ah Kheong finds his love for Wei up against the wishes of her well-to-do family and (gasp!) her influential businessman-fiancée Peter Shi (Zen Chong) – thank goodness then that Ah Kheong’s mentor Lee has also been in a similar predicament before and can lend some wise words of advice.

Unfortunately, what is supposed to make it endear to a wider audience is often stilted and unconvincing, no thanks to a contrived story and stiff performances from its leads. The poor-boy rich-girl treatment is hardly new, and what makes the difference between those that work and those that don’t are the situations between the leads, not just the meet-cute encounters between them but also how the conflict between their affair and their families plays out. The former comes off largely ‘blah’, save for one that sees the two come closer to each other than expected while taking down the makeshift screen for a community movie screening; indeed, in order to ensure that the movie remains accessible to the teenage demographic, a supposedly intimate scene between the couple in a small hut in the woods where they take shelter amidst a torrential downpour fades to black all too soon.

To be sure, it isn’t just their passion that’s lacking; the same can be said of the love rivalry between Ah Kheong and Peter. Played poignantly, their enmity can reinforce just how much Ah Kheong loves Wei and the lengths he is willing to go to be with her; played perfunctorily, it is no more than cliché and worse, laughably cringe-worthy at times. The latter is often the sentiment one gets watching Peter confront Ah Kheong for ‘stealing’ his fiancé, whether through his local policemen proxies who accuse the latter of being an activist or directly at gunpoint after thwarting their attempt to elope to Kuala Lumpur. One gets the sense that Tan can’t quite decide if she should simply go all-out mopey and melodramatic with the soap-opera proceedings or keep them restrained, resulting in an awkward ‘middle ground’ that will satisfy neither the Korean drama-loving crowd or the more arthouse-inclined niche.

Just as clumsy is the narrative structure that Tan has chosen to unfold her period-set romance, told from the perspective of Ah Kheong in his old age to a trio of documentary filmmakers in present day – hence the glorified cameos of Tay Ping Hui, Dennis Chew and Cherry Ngan. Without revealing any spoilers, let’s just say it causes the film to have one unsatisfactory sad ending and another artificially positive one, and for no discernably good reason except to have further cameos from Richard Low and 70s Hong Kong actress Cora Miao. Instead of a coda to link past to present, the movie would have been better served if it had spent more time fleshing out the former, especially in providing a raison d'être why someone from a privileged background such as Wei would associate herself with the anti-colonial student movement to protect the Chinese schools.

As it is, Wei remains a flat character whose inner motivations remain muddled, and it doesn’t help that Wee – who makes her big-screen debut here – is too impassive to embody Wei’s struggle from being trapped in a life subscribed for her by her father. Similarly, Tosh (Zhang) seems unusually subdued in his first leading role, so much so that we hardly feel his passion for movies that first motivates him to leave his village to come to town or his stirrings for the girl who has supposedly captured his heart. Together, Tosh and Wee fall short of being a swoon-worthy couple for us to be enraptured by their love for each other or their determination to be with each other despite the odds. Whereas, it is Taiwanese star Wang who steals the show in a supporting role as the coarse but good-hearted Lee, whether channeling Bruce Lee’s macho mannerisms or stripping to his boxers to dance the cha-cha.

Just as she does for her love of film here in ‘My Love Sinema’, Tan’s message through the journey of her two lead characters is a well-intentioned one to not give up fighting for one’s dreams and ambitions – hence the oft-repeated Chinese proverb ‘kill me, or slay me, I will fight till the end’. Yet both are likely to be lost on her audience, because as sincere as this period romance-drama is, it is told with a certain impassiveness that leaves us unable to identify with the characters or their convictions. That said, its Ipoh-based shooting locations does provide a lush evocative atmosphere for the period setting, and those who lived through the era will no doubt feel more than a tinge of nostalgia for a time when life was simpler and purer. Pity then that the film’s earnestness isn’t quite matched by its competence, which remains an invariable flaw no matter seen in which medium, film or digital.

(As well-intentioned and earnest it may be, 'My Love Sinema' flickers due to a stilted romance at its centre, contrived plotting and wooden performances) 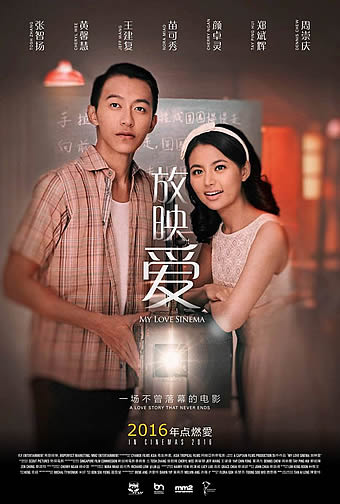 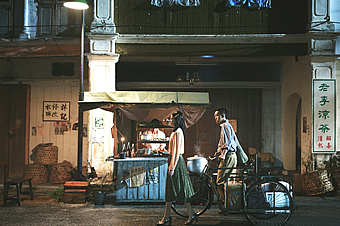