Synopsis: What starts out as a lavish train ride through Europe quickly unfolds into one of the most stylish, suspenseful and thrilling mysteries ever told. From the novel by best-selling author Agatha Christie, "Murder on the Orient Express" tells the tale of thirteen strangers stranded on a train, where everyone's a suspect. One man must race against time to solve the puzzle before the murderer strikes again.

If you haven’t yet encountered Agatha Christie’s parlour-car trick of a novel of the same name, you’ll be one of the few lucky ones who can still enjoy Kenneth Branagh’s big-screen adaptation of it as a whodunnit. But we suspect for most, the pleasures of watching Branagh re-stage Christie’s book after a fondly remembered 1974 Sidney Lumet version will lie in the telling of the story, rather than in the revelation at the end of it all, which his writer Michael Green stays faithful to its source material about. We might add that Green has chosen to retain the rest of the twists and turns in Christie’s busy plot machinations, which further reinforces why those who have encountered this tale before will find its joy instead in how it unfolds. And in that regard, Branagh has mounted a handsome old-fashioned piece of cinema that older audiences will come to find both familiar and pleasurable.

Just as Lumet did, Branagh has assembled a spectacular list of stars to accompany him on his ride. Oh yes, Branagh himself plays the lead role of Christie’s famed Belgian sleuth Hercule Poirot, who is on vacation on board the luxury train when a fellow passenger named Edward Ratchett is found dead with multiple stab wounds. No less than Johnny Depp plays Ratchett with his signature gangster air, and the list of suspects include Josh Gad’s shifty assistant Hector MacQueen, Penelope Cruz’s bitter Spanish missionary Pilar Estravados, Michelle Pfeiffer’s flamboyant man-hunter Caroline Hubbard, Willem Dafoe’s racist Austrian professor Gerhard Hardman and Judi Dench’s scowling Princess Dragomiroff. Of worthwhile mention too is Daisy Ridley and Leslie Odom Jr as a pair of secret lovers, a doctor and a governess, who in this iteration are portrayed as an inter-racial couple.

It shouldn’t come as a surprise that Ratchett isn’t just the shady art dealer that he claims to be, and for the matter are the other passengers on board the Orient Express who they say they are. Poirot’s investigation will uncover that they are all somehow connected to the kidnapping and subsequent murder of the adorable three-year-old daughter to American heiress Sonia Armstrong, a high-profile investigation then which had led to the wrongful prosecution of the family’s nurse when in fact it was later established that the killer’s identity was one Lanfranco Cassetti. A large part of the intrigue is finding out just who these twelve possible murder suspects are in relation to either the Armstrong family or the people implicated in its aftermath, which by extension explains too their plausible motives for killing Ratchett – and mind you, each one of them will turn out to have some reason or another for wanting him dead, challenging Poirot as well as the viewer to decide who’s lying and why.

Ensuring that every single character has a compelling reason to be part of the narrative was going to be a tough juggling act for any director, and Branagh doesn’t entirely succeed in that regard. The story is told from Poirot’s point of view, and because of their sheer number, most only get one or two pivotal sequences with him. The ones mentioned above at least manage to leave a lasting impression, but others that get even shorter shrift include veteran actor Derek Jacobi’s valet Edward Masterman, Manuel Garcia-Rulfo’s Italian car salesman Beniamino Marquez, and Sergei Polunin and Lucy Boynton’s Count and Countess Andrenyi. The way Branagh films how Poirot moves from character to character to interview them after the murder also gives the impression that these individuals are just sitting around waiting for their turn, which hardly seems likely if and when one knows of the truth of their culpability.

But to Branagh’s credit, his film does move at a brisk clip, which helps to gloss over some of the coincidences and unnecessary convolutions that Christie has herself admitted was a bit of an eye-roller. It may sound like vanity that Branagh’s Poirot gets the bulk of the screen time, but the actor-director does make the detective an intriguingly idiosyncratic character to watch – first and foremost of all by his intellect and mental agility; second, by his neurotic quirks, such as requiring that his boiled eggs at breakfast are exactly the same size; and third, by his impeccable waxed moustache, that does take some time to stop getting distracted at. As director, Branagh does bring to bear the sets, costumes and vistas for a sleek-looking film, complemented by his frequent collaborator Haris Zambarloukos’s interesting use of wide shots and overheads occasionally in order to lift the visuals out of its claustrophobic carriage confines.

On the whole though, Branagh’s version of the ‘Murder on the Orient Express’ is still a satisfyingly told murder mystery. The knotty storytelling pulls you in, and so do the A-listers who each make the best of their limited supporting roles. This Poirot, notwithstanding the unnecessary addition of a love interest, is also one of the more fully realised incarnations of Christie’s creations – and we’re not referring to the moustache, mind you. So yes, there are pleasures to be had whether you’re encountering this tale for the first time or if you’ve seen it before. It’s not perfect, especially a third act that feels rushed and muddled, but this is a rare throwback to the kind of escapist entertainment that used to be the stuff of blockbusters before the modern era of CGI and superheroes. So come now, all aboard the Orient Express!

(Not all the characters end up belonging as much as they should, but Kenneth Branagh's incarnation of Agatha Christie's classic detective novel as well as her famed protagonist Poirot is still an intriguing, sleek and ultimately satisfying murder mystery) 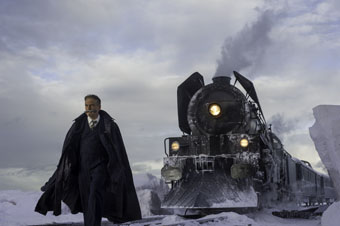