Synopsis: Acclaimed filmmaker Niki Caro brings the epic tale of China's legendary warrior to life in Disney's "Mulan" in which a fearless young woman risks everything out of love for her family and her country to become one of the greatest warriors China has ever known.

As earnest a reimagining of the classic tale as it gets, Disney’s live-action adaptation emphasises these three noble aspects of a plucky young girl who takes the place of her father to serve in the Imperial Army.

Gone are the musical numbers of the earlier 1998 animated version; gone too is Eddie Murphy’s jabbering dragon Mushu, as well as the “animal sidekick” Cri-Kee. These, to director Niki Caro, are unnecessary distractions in a story that would be better placed as inspiration for female empowerment.

There is no doubt that is the objective here, which takes a surprisingly character-driven approach to acquainting us with its titular character. Significantly expanding the first act to delineate the dynamics within the Hua family, the plotting illustrates the tension between Mulan’s loyalty to her family and to her own self; on one hand, she is called to demonstrate honour as a daughter to her family by being a good wife, and yet on the other, she knows she is ultimately a warrior by heart.

She is put to the choice when the Emperor (an almost unrecognisable Jet Li) issues a decree for each family to offer up a male conscript into the Imperial Army, in order to do battle with the invading Rouran tribes. You would know that Mulan chooses to put on her father’s (Tzi Ma) armour and join the army, disguising herself as a man so that her commanding officer Tung (Donnie Yen), second-in-command Sergeant Qiang (Ron Yuan) and fellow soldiers would not suspect otherwise.

With neither Mushu or Cri-Kee, it is up to Mulan and her interplay with these other recruits to hold the rest of the first hour together; among them are Honghui (An Yoson), a confident equal who becomes a firm ally, as well as Yao (Chen Tang), Ling (Jimmy Wong) and Chien-po (Doua Moua). Other than a one-on-one with Honghui, where Mulan (or Hua Jun as she goes while trying to mask her identity) demonstrates her inner ‘chi’, these warm-up scenes are frankly less engaging than you’d be expecting them to be, especially if your comparison is the earlier animation.

It is only in the second half that ‘Mulan’ truly soars. A forward offensive led by Commander Tung against the Rourans evolves into a thrilling horseback battle between Mulan and a small group of Rouran soldiers, before culminating in a mountain-set battle that is quite simply jaw-dropping. Liu handles the action as capably as she does the emotions in the earlier part of the movie, and proves without a doubt that she has been cast perfectly in the role.

By the time we get to the finale set in the Imperial City itself, you’ll be in awe at the sheer breathtaking scope of Caro’s vision, which recalls the wide-canvas historical epics of Ang Lee (think ‘Crouching Tiger, Hidden Dragon’) and Zhang Yimou (think ‘Shadow’). It is spectacular all right, with dizzying, gravity-defying wuxia action on rooftops, on stilts and even on a beam suspended in mid-air balanced at its centre; and thanks to Mandy Walker’s crisp cinematography, every glorious moment is beautifully captured.

But besides its visual splendour, ‘Mulan’ also gains surprising emotional depth in its heroine’s scenes with the shape-shifting Xian Lang (Gong Li). Though it may seem like she would be just another insignificant supporting character to Jason Scott Lee’s glowering Rouran chief Bori Khan, Xian Lang emerges at the end bearing poignant similarities to Mulan herself, as women whose innate gifts were (at least initially) rejected and scorned. Li is a consummate performer in every regard, playing Xian Lang with as much grim ferocity as tragic sadness.

Indeed, Mulan’s journey remains at the heart of the film, and the extent that her story leaves you moved and stirred is ultimately Caro’s credit. This is the New Zealander’s biggest project to date, and she handles it with absolute confidence. Together with production designer Grant Major, Caro breathes energy, colour and symbolism into the storytelling, giving the film both scope and intimacy. Like we said, this is a story of rising to confront who you really are, and Caro makes every one of those three oft-repeated words – ‘loyal, brave and true’ – felt in her earnest and rousing remake.

As far as Disney’s live-action remakes go, ‘Mulan’ belongs unreservedly in that group of successes such as ‘Aladdin’, ‘The Jungle Book’ and ‘Beauty and the Beast’. Than the animation itself, this adaptation draws more from the 5th or 6th-century Chinese poem ‘The Ballad of Mulan’, eschewing all manner of frivolity to deliver a sombre, grounded and realistic imagining of a woman who ventures into battle in her father’s place disguised as a man. It is a tale ripe for retelling in the current zeitgeist, and ‘Mulan’ gets the message across with sweeping and swooping intensity.

(Breathing energy, colour and symbolism into a familiar tale, this live-action remake is an epic in its own right, with as much intimacy as it has sweep) 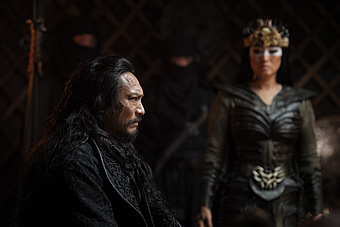