Synopsis: Mr. Peabody, the world’s smartest talking dog, has invented a time machine he calls the WABAC, which enables Peabody and his adopted human son Sherman to witness world-changing events first hand. But when Sherman breaks the rules of time travel, our two heroes find themselves in a race to repair history and save the future.

To the uninitiated, it may come as a surprise that “Mr. Peabody & Sherman” is based off a slapstick cartoon in the 60s about a genius dog and his “pet boy”. Billed as a “cartoon for adults”, it straddled both target groups of kids and parents. Director Rob Minkoff (“The Lion King” – but don’t expect anything similar) dusts off its vintage origins and repackages the cartoon for the big screen in 2014. This time round, Mr. Peabody (Ty Burell) is a genius dog who has proven himself worthy of being an adoptive parent of the human boy Sherman, after graduating from Harvard, riding a Vespa, mastering a myriad of musical instruments, excelling at every sport and even manipulating the space-time fabric to invent a working time machine, known as The Way Back. Young and impressionable, Sherman (Max Charles) is sprightly and eager to please. The two travel back in time to learn the truth about historical events by coming face-to-face with the people who made history – not just what’s in the history books or Wikipedia.

But all that academic theory being drilled into Sherman doesn’t necessarily prepare him for the school of hard knocks, which in Hollywood movies is often really just school: jealous classmate Penny (Ariel Winter) cruelly makes Sherman a lunchtime spectacle after he overrides her contribution in class with a dubious claim that contradicts common knowledge (courtesy of The Way Back). Ridiculing him for his abnormal parentage, the incident turns ugly when Sherman bites the girl’s arm and ends up under the disciplinary spotlight. With the right to his son’s custody being questioned, Mr. Peabody invites Penny and her parents over to their home in a bid to persuade them to settle things informally. Sherman does his best to appease Penny, ultimately turning to the last resort of defying his father’s explicit warning not to use The Way Back.

What follows is a journey through time as Sherman and Penny stumble into roadblocks at every turn (Egypt, Italy, France, Greece, throughout the ages), only to be saved by Mr. Peabody’s formidable wit and knowledge. LeonardoDa Vinci, Shakespeare, Marie Antoinette and Agamemnon all make appearances. Apparently able to calculate and extrapolate events using the laws of science, the genius dog may inadvertently sow the seeds of ambition in more than a few young minds to become future scientists or engineers. Penny eggs Sherman on, encouraging him to push his boundaries, ignore his dad’s orders and mostly find his footing on his own; and is criticised for being a negative influence. Screenwriter Craig Wright’s script, delivered with impressively quick comic timing by the main voice actors, expels scientific theory at rapidfire speed. It’s laced with so many puns that it would probably keep the kids entertained enough, but the not-so-young-at-heart may be less impressed by how painfully predictable some jokes are.

While Mr. Peabody is clearly exaggerated – overachieving in every sense, made more unbelievable by the fact that he’s a beagle – Sherman is angled to play off that by being the nonplussed everyman. Or is he? He’s also the smartest kid in the classroom. Perhaps it’s to show that even when you’re smarter than a typical grade-school student, you can’t touch Mr Peabody’s epic genius? Either way, it’s hard to identify with the boy, a character development flaw that hinders the film’s ability to touch the audience emotionally.

On the whole, it isn’t easy following on the heels of “The Lego Movie”, a much lauded advertisement for a company selling brick toys that succeeded in delivering a message while entertaining the kids (and adults). While equally vivid in colour, this pales in comparison somewhat by not having a clear message to deliver. Still, the film is entertaining and clever enough to amuse the kids for a couple of hours – and therefore a good choice for parents or caretakers looking to spend some time indoors.

(While lacking somewhat in emotional quotient, “Mr. Peabody & Sherman” kills two birds with one stone by thrilling the young ones while hopefully impressing on them the usefulness of science and maths in everyday life) 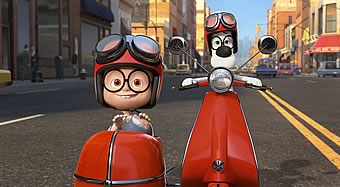