Synopsis: When ISIS took their homes, families and city, one group ofmen fought to take it all back. Based on true events, this is the story of the Ninevah SWAT team, a renegade police unit who waged a guerrilla operation against ISIS in a desperate struggle to save their home city of Mosul.

Instead of having the typical white Americans saving the world, Mosul tells the story of a group of brave Iraqis trying to take back the place they once called home in this action thriller written and directed by Matthew Michael Carnahan (writer of World War Z, State of Play, The Kingdom).

Although shot in Morocco, Hollywood’s favourite stand-in place for the Middle East, the story is set in Mosul, Iraq. Once a thriving metropolis, Mosul is now in a war-torn state controlled and destroyed by ISIS (named as Daesh in Arabic) invaders. A small Nineveh SWAT team led by Major Jasem (Iraqi actor Suhail Dabbach) is out to drive or specifically kill the Islamic fighters who are bent on destroying everything along their way.

When a young police officer, Kawa (Adam Bessa) managed to survive a shootout with the ISIS which took the life of his uncle, Kawa is offered the chance to join the SWAT team by Jasem. Being the latest recruit, Kawa is curious as to what mission they are taking upon next. But no one in the team seems interested to make any small talk with Kawa perhaps the team is worried that he might be an ISIS infiltrator after all.

Is Kawa a traitor in the end or is Major Jasem planning some major mysterious secret mission behind? Mosul doesn’t really have a clear cut storyline but Matthew Michael Carnahan manages to deliver a hard-hitting movie via a series of carnage-filled action sequences and mostly through the perspective of newbie Kawa. The action is often harrowing, highly realistic and best of all, there’s no shaky-cam in sight.

The SWAT team only takes men who experienced death in their respective families and Kawa happened to meet their criteria. Throughout their journey, Kawa learnt that their team never offers any mercy to the fallen enemies. It’s either silting their throats or letting them suffer a terrible death. Even then, Kawa couldn’t bring himself to take a selfie with the deceased. While Major Jasem might seems liked the no-nonsense commander, he cares for his fellow teammates as much as he cares for the place he was born and raised in. In a much later scene, we see Jasem trying his best to get two orphaned young brothers to safety.

Besides Kawa and Jasem, another memorable character belonged to Waleed (Jordanian actor Is’haq Elias). The sometimes quick-tempered, impulsiveness teammate whose constant secret conversations with Jasem is finally unveiled in the finale. However, Carnahan never glorifies the team’s killings nor state the true intention of his movie. All the while, the story is never about honour, it’s more about survival and slowly building Mosul to its original state.

Produced by the Russo brothers and shot entirely in Arabic, Mosul fares like a typical war movie set in the Middle East except this time, we are seeing it from the other perspective. Comparing to Carnahan’s previous written works, this one is less political-inclined. It’s generally an American movie led by a group of mostly competent Arabic cast with an anti-war theme.

(A competent well-made war movie with a somewhat subdued message) 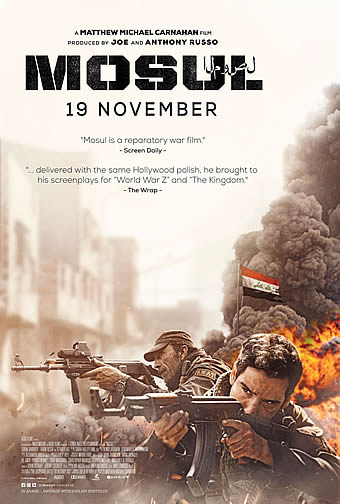