Synopsis: In a fantasy world far, far away, monsters ruled the land. Then came human’s all-out war in an attempt to seize the land. In its final days, they outwitted the monsters and succeeded in driving them into the dark mountains. Ever since, monsters were forbidden to step into the land again. If they were found, they would be captured and exterminated. For all these years, the two races have lived in their separate worlds, until the birth of a new monster king who would reshape the balance of power and bring in the new world order.

A long time ago in China, humans co-existed with monsters before, in typical human fashion, the humans decided to wage war to banish the monsters... Or so the film starts.

The reviewer admits that she is not a huge fan of films that combine live action and animation. These films, or those which were memorable anyway, tend to be filled with too-fake CGI, and horribly awkward acting, where the actors attempt to interact with something obviously not there. That said, Monster Hunt was strangely enjoyable, even for someone who usually shies away from such films.

The premise of the film is atypical but predictable - girl meets boy, girl saves boy from getting eaten by monsters, boy gets pregnant and gives birth to radish, before the both of them travel to a restaurant. Before the film even starts, the audience can sort of guess - girl and boy falls in love with each other, and they create a family unit with the radish. Which sort of happens, although thankfully not in an overly sentimental and corny way.

But first, the animation. Helmed by the co-director of Shrek the Third, and the supervising animator of Shrek and Shrek 2, Raman Hui, one would expect that the animation in the film would be a departure from the typical Chinese animation (think martial arts flicks from the 90s and early 2000s). Hui does not disappoint, blending the animated monsters with the live action elements impressively well - which was a huge relief, given the central position these monsters have in the movie. The transition from human to monster (as the monsters were literally hidden in human skin) was also done smoothly and, to a certain extent, believably, when other films typically over-dramatise the whole process. In all, the animation was a huge breath of fresh air in the Chinese animation scene, and ticks all the boxes in that area.

The story's protagonist, Tianying (Jing Boran), is the good-natured mayor of Yongning Village, After being saved from becoming food for fleeing monsters Zhu Gao and Pang Ying (played and voiced by Eric Tsang and Sandra Ng respectively), Tianying is forced to abandon his village while heavily pregnant, and travels with Xiaolan (Bai Baihe) towards Shuntian City.

Jing's comedic performance as the peaceable and naïve male protagonist with a Tragic Back Story does not win the hearts of the audience from the start. However, while acting out the standard scenarios of pregnancy and motherhood (eating absurdly sour food, breastfeeding, etc.), Jing somehow convinces and endears the audience with his waddling and maternal instincts. Which could have been easily overplayed as well, but was avoided by Jing.

In contrast to the helpless Tianying, Xiaolan is independent and boyish (while also having a Tragic Back Story), with a tendency of biting off more than she can chew. Xiaolan is oddly likeable despite being a mercenary second-rate monster hunter, perhaps due to Bai's impish smirks and her portraying the character as a typical tsurundere, for a lack of a better word.

The gender subversion between Tianying and Xiaolan does come as a surprise due to the male-dominated Chinese society, and it comes to a sudden halt at a later part of the film, as Tianying becomes the hero of the hour while Xiaolan is reduced to a damsel in distress. It is a disappointment but A+ for effort while it lasted, I guess.

Despite the good-looking and complementary main cast, and the many cameos from bigger stars, such as Tang Wei and Yao Chen, the highlight of the film no doubt does to the monster baby who Tianying gives birth to. Unexpectedly cute, the baby radish gets increasingly likeable as the story progresses, growing onto his surrogate parents and the audience despite looking distinctly unbaby-ish. The saddest sound, and scene, of the movie was probably the baby radish crying for the first time - which is almost sure to break any parent's heart.

The show does come full circle at the end, but leaves too many questions and storylines unexplored. Who exactly is Tianying's father? Is his grandmother senile for real? Can Tianying really become a monster hunter? Will we ever see the monster baby again? Thankfully, with the movie's strong showing in the Chinese and international box office, we can probably expect a sequel (or three, given that the main cast has been signed on for the next three movies), which hopefully provides more answers while maintaining the high quality of animation and avoiding the clichés which sequels tend to fall into.

(Monster Hunter is the perfect example of a predictable yet enjoyable film, with the breakout star a baby radish which stole our hearts from its first squeak)

THE SORCERER AND THE WHITE SNAKE (2011)
Back 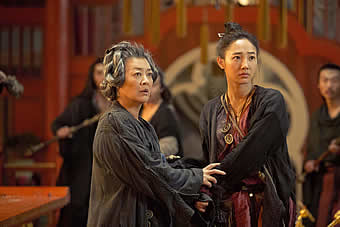 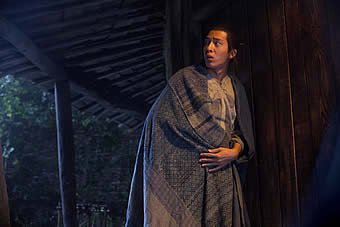 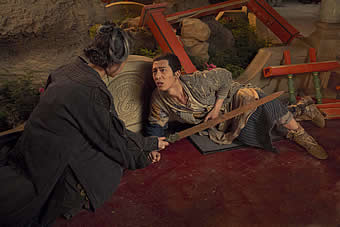