Synopsis: Since ancient times, the earth has been home to aliens called MEOW. They come from a faraway planet and have transformed themselves into cats, living in every corner of the world. With their adorable appearances and clever minds, MEOWs easily became the beloved pets of humans, and are served with an endless supply of food. Some MEOWs are uninhibited, living like mafia bosses; some MEOWs are smart, they treat human like minions, and live like royalty in their homes; some MEOWs are…

If you’ve ever wondered whether your family cat is really an alien from another planet, then ‘Meow’ is the movie for you. No seriously, ‘Meow’ imagines an alien planet of the same name whose feline inhabitants have been dispatched by their King to Earth for thousands of years to colonise mankind, although none have so far proved successful in their respective missions as a result of being pampered by their human hosts. Their latest attempt comes in the form of a Meowian warrior called Pudding, who is sent to Earth with a Secret Weapon in order to rally the rest of his kind. Some bad weather upon his descent however causes him to lose the Weapon and adopt the form of an orange tabby cat in order to survive in Earth’s environment, albeit in much chubbier and oversized form. And last but not least, a mix-up sees him being renamed Xixili and adopted by former-soccer-star-turned-hopeless-businessman Go-lee Wu (Louis Koo), who has agreed to babysit the cat as a favour for a potential client.

Sure enough, its absurd premise has led to much online brickbats, some of which have been lobbed at its lead actor Louis Koo as well as its director Benny Chan. But face it, is the idea of a giant, adorable alien cat any more ridiculous than say three talking, singing and dancing chipmunks? Or say a couple of talking dogs a la ‘Marmamuke’? Or better still, a fat, free-spirited orange cat whose name happens to rhyme with ‘Garfield’? Sure enough, ‘Meow’ belongs in that category of family-friendly live-action comedy films – and in our opinion, one of the more entertaining, hilarious and heart-warming ones we’ve seen. Oh yes, the man-sized feline Xixili is funny and likeable all right, but the movie’s charm also belongs to its human characters – besides Go-lee Wu, his highly-strung wife/ aspiring actress/ power mum Pearl Zhou (Ma Li) and their two children comprising an older son Yoho Wu (Andy Huang) with filmmaking ambitions and younger daughter Yoyo Wu (Jessica Liu) who suffers from a congenital skeletal anomaly in her right leg.

As conceived by writers Ho Miu-kei and Poon Jun Lam along with script consultant Chan Hing-kai, ‘Meow’ is as much about Xixili learning about the beauty of family as it is about this family of four uniting around one another. So it will go that Xixili will become intertwined with Go-lee and Pearl’s familial and marital challenges, the latter precipitated by the former given how gullible and even naïve Go-lee is – not just in his failed business ventures, but also in how he ends up chalking a two-million debt by agreeing to be guarantor to a shady individual (Lo Hoi-pang in a cameo) and then falling prey to an elaborate scam led by three career criminals (played by the ‘Grasshopper’ trio).  A fangirl crush that Yoyo’s PE teacher (Michelle Wai) has on Go-lee and a chance meeting with a former schoolmate Boss Liu (Louis Yuen) that used to have a crush on Pearl further complicates their already financially strained husband-wife relationship.

The busy script juggles two other subplots – first, the bond between Xixili and the family through a couple of amusing sequences including one where Go-lee tries to teach Xixili to play fetch and another where Yoyo brings a heavily disguised Xixili into a parent-teacher meeting; and second, Xixili’s call of duty in his capacity as Pudding, which he (unsurprisingly) abdicates after being moved by the display of family love. Amidst the character dynamics are a couple of genuinely amusing sequences – a few where Koo gladly hams it up trying to pacify Xixili; a series of endorsement shoots driven by Xixili’s accidental fame, especially a ‘Journey to the West’ spoof that has Xixili as the Monkey King, Pearl as Xuanzang and Go-lee as a demon; and last but not least Xixili’s fruitless meetings with the elder Meowian warriors turned tamed kitties who had come to Earth before him. As you may expect, it all culminates in a melodramatic but undeniably effective finale where Go-lee and Pearl rallies behind Yoyo and her fierce determination to break free of her physical impediment.

Yup, originality isn’t exactly the film’s strong suit, what with obvious elements from ‘Men in Black’ and ‘Forrest Gump’. Still, the veteran Chan, in a marked departure from the action genre he’s made his name in (think ‘New Police Story’ or ‘The White Storm’), keeps the tone light and the pace brisk so that the movie on the whole remains enjoyable and engaging. Rather than compare to his other films (and he’s made some bad ones like ‘City Under Siege’ mind you), Chan’s contribution is better appreciated in how ‘Meow’ could have been much worse under a lesser director. Chan also brings along here his regular collaborator Koo, who throws himself dignity be damned into the role, and assembles an equally game cast in Mainland comedy actress Ma as well as lovely child actors Liu and Huang. There is real chemistry among them as one dysfunctional family, and you’ll no doubt be rooting for them by the time the saccharine-dripped climax comes along.

It must also be said that ‘Meow’ represents a technical achievement of sorts for Chinese cinema in the CGI work behind Xixili. Comparisons to Hollywood are unjustified, given the size of the budgets no less, but Xixili is unexpectedly well-animated particularly in the close-up shots emphasising his luxurious orange fur. And if it isn’t obvious by now, let’s just say that we were pleasantly surprised by ‘Meow’, which could have easily turned out messy, infantile and embarrassing as many have unfairly criticised it to be. Like any of them Hollywood live-action family films, this is surely intended to be family-friendly entertainment – and on that account, is just as, if not more, delightful than ‘Alvin and the Chipmunks’, ‘Marmaduke’ or ‘Garfield’. That’s still not enough for it to qualify as a family classic, but for a weekend family outing to the movies, ‘Meow’ will have the kids grinning in agreement.

(More delightful than we expected this to be, 'Meow' is family-friendly entertainment with some wacky laughs, consistent cheer and a heartwarming affirmation of family love) 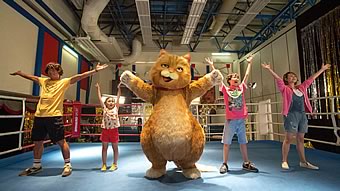 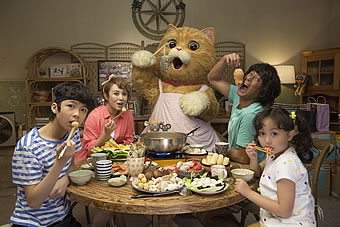